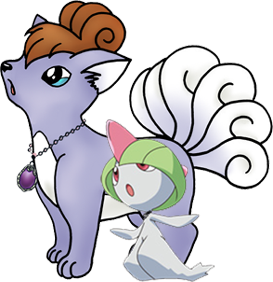 Amity Square|Late Afternoon
(S-7/P-16)
Prince nodded dumbly as Azelf gently lifted him, the psychic's aura surrounding the Ralts and giving off a soft warmth that instantly calmed the frightened youth. It had felt like an eternity since his mind was able to give off any kind of peace, the inner walls barraged by pain, death and chaos ever since stumbling into this group, but with the Legend it seemed like his will was steeling itself. He was becoming stronger, and with that strength he was determined to do something to help this troubled group. The Ralts refused to become a burden for anyone to carry, saddened enough that a Legend had to take pity on him just for him to stand, and silently he made the decision that he was going to become stronger.

Sofia, however, was still in shock. She had watched the pair drowning themselves, had watched their pain and suffering first hand and the emptiness they left behind was an all encompassing void. A black hole of loneliness suffocating the living world and choking off the last shred of happiness left in it. Sofia couldn't stand it, her sobs turning into tears as her body curled in on itself and the small female mourning the passing of those she had barely even known. To her it didn't matter if you knew someone for minutes or years, anyone leaves an empty space in a heart when they leave and never come back and for her the pain was all too real. The sweet little monkey had even saved her amulet...

A gut wrenching scream caught the Vulpix's ears and she looked up in time to see Caine once again rising from the water and for a moment she was relieved, thinking he had changed his mind and fought to save himself, at least until she saw the Pidgey hanging from his mouth. She couldn't scream, her mouth hanging open and eyes wide in horror as she struggled to make a sound, but the air would not leave her lungs. Pupils dilating wildly she could only stand frozen in shock as the former living lunged for the black and gold wolf and threatened to tear the group apart.

[You must be registered and logged in to see this image.]
Amity Square| |Late Afternoon
21
"O- Oliver, Caine! Need help, drowning! Th...th-that way!"
Those very words were all that was needed to make the child move, the normal-type hurriedly stumbling forward despite her injuries, losing balance on her own tail as she toppled forward. She gasped, crawling forward as she screeched. "NO!" she sobbed. "No no no no they can't...t-they can't..." she wailed, body shuddering. "S-Somebody help them! Pl-please...please they can't...they can't..." she pleaded, watching as Noke's paws sprinted him to the pool, but she could tell by the way he stopped and stood still that Caine and Oliver were gone. Her breath hitched, burying her face in the grass beneath her.
The sudden howl and screech made Molly look up with hope, quickly shattered by a fox emerging from the water and it's jaws snapping into the tiny Pidgey. Her eyes widened, mouth open in fear as she stared at the sight. "No..." her voice was hushed, body frozen and unable to comprehend what was happening. The monster from the pool had a striking resemblance to the Ninetales but...but... "That...isn't Caine...it...can't be..."
Azelf

Amity Square || Late Noon || 22
Amazing, Prince seemed to be looking a little... better. Was it the sensation of being held, or was something else soothing him?

He could find out later. Right now, he was needed.

Unfortunately getting there took a few minutes, but upon arrival he wished he had just taken Prince and booked it in the opposite direction

The undead in front of him could only be Caine. It could be no one else. Even though he desperately wanted otherwise.

((I'm sorry guys but I have nothing to really go on this round. Please skip. Sorry for holding it up I had no idea that round went so quick.))
Min

Another call, another yearning guided him. Xerneas once more wandered through the deserts, forests and mountains to a new place, a new foreign setting. Days and nights of travel were blinks of the eye to the legend, the time it took to get to his destination irrelevant. All that mattered was that he had finally arrived. Emerging from the close trees, he stepped out into a frosted clearing. Strange human-made objects littered the field, but the cervine's heart alighted to see Nature overtaking much of the humans' filth. A quick glance to the other side spied where once a fire tore at the forest, but the trees were much on the way towards mending. Something terrible had happened here, in this barren, chilled clearing, that much was obvious.

Lithe, long legs took him further in closer toward the source of the guiding echoes. A pond sat nearby, its surface beginning to freeze with the dipping temperatures. Within it were two shapes-- two figures he instantly recognized as his augur. The soothing blue light glowing from his antlers soon blazed a brilliant rainbow of color, illuminating the partially frozen pond. His eyes fixated upon the two bodies, long forgotten by the world. Long roots gently reached down, down, down to the bodies, gingerly bringing the waterlogged corpses back toward the legend. Once they gingerly bubbled up to the surface, pushing the patches of ice aside, his eyes studied their form for a moment.

He did not recognize their species, but their bodies, thanks to the frigid temperature of their shared watery grave, were still mostly intact. The roots placed them upon the stiff grass in front of Xerneas, then retreated back into the earth. His power hummed and pulsed, his aura becoming that of an eternal heartbeat. For a moment, it was the only sound, the only sight, the only feeling. Blinding light. A heartbeat, that soon turned to three. His task completed, the light dimmed back to the rainbow of colors before they flowed into the neutral blue. The call was no more. His work was done.

Instead of immediately leaving, however, he stared a moment at the two. Something compelled him to stay, to watch the two awaken. They sputtered of course, their lungs ridding themselves of any stray amounts of water that had been stubborn enough to remain. But as they slowly slipped back into the realm of the living, his realm, the three stared at each other a moment, wordless. He did not know the circumstances of their death, but somehow felt that perhaps it had not been accidental. The thought caused his gaze to narrow slightly at the two, but still, no words were spoken. None needed to be. He turned, leaving the two in the bright starlight to themselves. And as quickly as he'd arrived, Xerneas disappeared into the dark of the forest.
Sponsored content