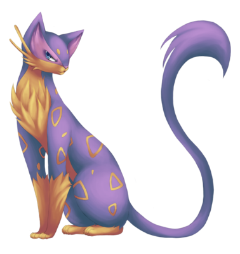 POKéDEX ENTRY-
These Pokémon vanish and appear unexpectedly. Many Trainers are drawn to their beautiful form and fur.

HISTORY
I was once in love, you know.

Truly, I tell you, it was that kind of love, the kind that you feel is once in a lifetime. I had fancied nothing much, then, as a purrloin, rather fancying the fact that a homely stature that I had coincided within was just fine with me. I was perfectly alright with settling down in the neighborhood, catching the occasional rattatas for myself and my fellow feline friends. I was content.

I was content until my someone special came along. Please don't scoff at me for saying this, but it was love at first sight. We constantly bickered, he and I, but a day came when I realized that hello, the love of my life is right in front of me. I couldn't feel anymore happier whenever I was in his presence; the way his eyes seemed to have so much depth in them, or how his fur felt next to mine. The first few weeks after the two of us getting officially pinned was, well, what I would easily call the best days of my life.

My mother constantly warned me that I was going down the wrong direction, and my father barked out orders that I was not to see my beloved any longer. Yet, when love is blind, it blinds you badly. I continued to meet with my other half for many months to come, often training together under the moonlight or simply basking in the morning sun side by side. We were to be cherished loved ones to another for a very long time.

Or, at least, that was how it was meant to be. The two of us living on the streets as wild Pokemon, we knew that we were susceptible to being captured. It pains me to admit that it was I that was captured one fateful evening, looking on from within my Pokeball as I was being carried away from my homeland and beloved. "I'll find you again! I swear I'll keep looking until I reach the ends of the earth!" His yowl reached across the sky, so full of pain and hurt.

I refused to take part of whatever my trainer set out for me to do. Practicing in something that my beloved was not in with me hurt too much - in fact, everyday without my sweetheart left me feeling empty inside. In the following weeks, I learned what 'heartbreak' meant very personally. When the epidemic came, it did not change what was happening deep within my heart. There was just too much turmoil internally for me to be too concerned about the world outside of me.

But when these so-called infected Pokemon appeared, I was forced back into reality, and for about a week, my mental stability was, I suppose you can call it, unstable. Without morals of loyalty lodged within me any longer, I began to find that fondling with others and backstabbing them soon after was much easier. When I left my trainer, I didn't feel any regret. When I stole resources from Pokemon I accompanied for a bit and stranded them, I didn't feel any guilt.

The price of heartbreak, I guess.

Re: Bachi the Liepard - Amity, Sinnoh