Ciel the Venonat and Sebastian the Houndoom[Inactive]

Ciel the Venonat and Sebastian the Houndoom[Inactive] 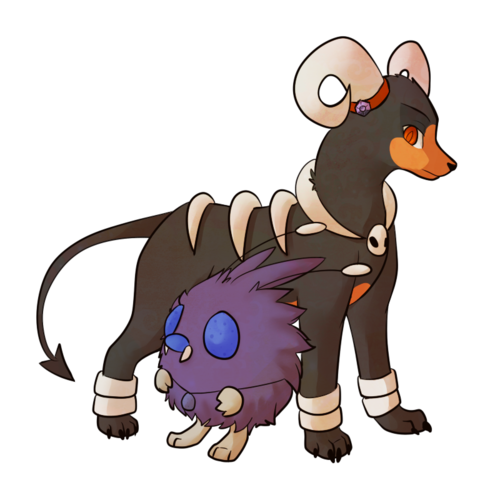 Pokédex Entry: "Venonat is said to have evolved with a coat of thin, stiff hair that covers its entire body for protection. It possesses large eyes that never fail to spot even minuscule prey."(Ruby/Sapphire Pokédex)

Item-
Eviolite hung by a piece of string around the head.

Pokédex Entry: “The flames it breathes when angry contain toxins. If they cause a burn, it will hurt forever.”s that never fail to spot even minuscule prey." (Black/White Pokédex)

Item-
A Ghost Gem that’s strapped tightly around the head horns with an red band.

History-
Ciel was born and raised in the care of a wealthy British family, whom was mostly known for their company in the toy-making industry. Whether the Venonat was bred to be shiny never struck him, but nonetheless, he was spoiled and pampered endlessly during his time with them. Despite this, however, he was still rather well-mannered, and enjoyed playing the various games the family has provided him with. The manor was always filled with smiles, never had Ciel once thought of bad things happening to them.

But he was wrong, very wrong. One evening, a group of bandits burned down the manor, kidnapping Ciel in the process as he watched his family slip away from his grasps. When Ciel was kidnapped, he was the center of attention. He became part of a show as he was sold away, in the show, many people paid just to see him get tortured. They laughed and smiled as he screamed in agony. They loved how the family’s Pokemon was being tortured and humiliated. Hatred and the thirst for revenge began to fill from there.

As months passed, he was able to call up a Pokemon to help him; Sebastian. Ciel had long forgotten how the Houndoom appeared, nor how he was able to call him, but it was a miracle that Sebastian appeared. He and Ciel made a contract that when the Venonat fulfills his revenge upon those that humiliated him and follow his every command, that Sebastian would be able to devour him once death comes around the corner. To wonder why a Houndoom would do a contract instead of eat Ciel on the spot? Sebastian just wanted to play a little game before taking his prey, afterall, the hungrier he is, the better the food. Sebastian, then, aided Ciel in his escape upon making the contract, also killing several people that had him kept in that hellhole.

More months went by; the Shiny Venonat became quieter and colder in terms of personality. Not that Sebastian minded, he still followed Ciel’s command without a fight and always referring to Ciel as his ‘Young Master’. During those months would the Houndoom help him with his revenge, killing, torturing, traumatizing, blackmailing, and perhaps more to those that had made the Bug Pokemon this way.

Slowly the Epidemic came along; the ones that Ciel wanted to take revenge on for so long fell one by one to the Undead ranks. He did not like it one bit. They were still up and moving, and the foreboding wind is passing by. With or without Ciel’s command did Sebastian stay along with him, teaming up in order to uncover the reasons for the Epidemic and at the same time attempting to survive long enough in order to finish up their plans nice and clean.

Appearances-
Two figures; master and servant. An odd-likely pair bond under a contract, but with or without it, they try to uncover the clues surrounding the sudden apocalypse.
Ciel appears to be a shiny Venonat, though it is rarely noted has the difference between a normal and shiny Venonat is minimal. An Eviolite is strung tightly around his neck, it is one of the two items that bond them together in the contract.
Whereas, Sebastian is a normal Houndoom, average height and weight, but despite this he is still rather quick. He has many scars around his mid-area, but most of them are faded away. They're from the past contractors. There is a Ghost Gem strapped by a red band around his horn, it's the other half of the two items that bond him and Ciel together in the contract.

Personalities-
Sebastian is rather patient and finishes up his work diligently and quickly as possible (being Ciel's pawn and whatnot). Despite this, he has an intimidating air surrounding him that only Ciel would be able to break off. The Houndoom is rather strict upon Ciel's safety (which is quite odd seeing as if Ciel died, the Fire/Dark duel-type could just eat him from there. It's possible he's quite bonded with the Venonat), and never attempts to 'nose' in other others' businesses. He does get irritated if things are not done correctly.
On the other hand, Ciel enjoys a good game and uses everyone at his disposal, but he does show some affection towards Sebastian despite all the commands he gives him. He prefers to be independent and is rather prideful, but usually embarrasses himself in the end.

User Notes-
> Both of Ciel’s parents were Venomoth> Ciel is a shiny Venonat> Sebastian’s father was a Zoroark> Ciel and Sebastian are based off of Kuroshitsuji's Ciel Phantomhive and Sebastian Michaelis.> The idea was adopted off of NightmareEmber, but she allowed me to put more detail into the history as she had never put them in active.> Sebastian's history was never stated before he met Ciel, thus I made it very vague in here.> Because of the Houndoom's appearance with all the skulls and such, Sebastian does make a comment that he is the devil's servant (but the statement is utterly false).> Rarely does the Houndoom show affection towards Ciel, but when he does, the thought of eating the Venonat somewhat disappeared as he is comfortable with his lifestyle.> Ciel's Text; #B333E6> Sebastian's Text; #A30606> Adopted
-Readopted from Rixcs, formerly created by myself.