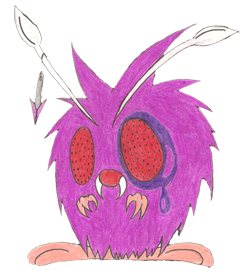 Pokédex Entry- Poison oozes from all over its body. It catches and eats small bugs at night that are attracted by light

History
Since he was born, he was different from most Venonats having a strange mark on it's fur around his left eye which seemed to make the form of a tear. Many believed he would be special.
Although this young pokemon's happiness was short lived since he became an orphan at a young age when a pack of Scythers threatened their life, his father stayed to attempt to fight for the family while the Mother ran away with the young Venonat...but unfortunately the Mother met a hungry Ariados and fell prey to it. The poor child witnessed his mother getting devoured before escaping.

Having no name and the only memory of what happened to his parents, he's a mute pokemon that was adopted by it's best friend, a Cacturne named Dell Mundy but once the Infection broke through...they got separated by the Infection since Dell fell to it's "claws" and started to turn. Venonat ran away and now is alone attempting to fight for his life and attempting to find friends.

User Note
-He often comunicates through drawing or writting on the ground.

-He's a very shy pokemon, hearning his trust is not easy, although his curiosity, childish nature and wish for new friends always makes him attempt to find someone.

-Poison Barb is strapped in a pendant in it's antenna.

-Sometimes likes to sit on other pokemon's shoulders or head, only the ones he considers to be friends.

-Is terrified of Ariados and Scythers because of what happened to his family.

Inactive, please and thank you.
Mewtwo

Yes i'm sorry, but um I'd like to keep him active. I just need to find somewhere to place him.
Mewtwo

Wait...I'm confused. Keep him active or inactive? Somewhere to place him?

As current, he is already active and in a team. Through adoption you get to keep his spot, he just needs to be approved under your name. Or where you wanting to move him?
_________________

Active please and Ciana had a pokemon approved for the team, so she took my spot.
Mewtwo

No, i'm taking about Pallet Team. He WAS on that team and Ciana took that spot.
Mewtwo

I'm so sorry.
I changed it to SS Anne, so please place him on SS Anne.
Mewtwo

Okay. Got it. Sorry that took so long.