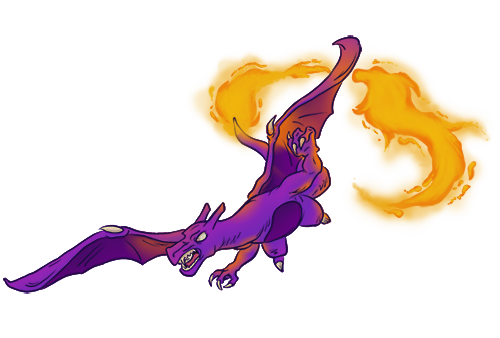 Ability
Blaze
Nature
Serious
Characteristic
Proud of its power
Height
5'07"
Weight
199.5
Pokedex No.
#006 Charizard the flame pokemon
Pokedex Entry
It is said that Charizard's fire burns hotter if it has experienced harsh batles. W2
Personality
Shadow takes things serious when situations turn bad, but mostly keeps to himself. He doesn't like others judging his coloration from normal charizards.
Appearance
Purple in color and eyes glow due to a mutation at birth.
History
Shadow hails for the deserts of Orre where he and his parents had came to from a far away land. As he was born his coloration was different from that of a normal or shiny charizard. Mostly due to a mutation when he was born. When Shadow opened his eyes his parents was shocked by the look of them. Either way they loved him none the less and wouldn't have it any other way. Four years passed since then and the charmander followed his parents everywhere, but after a while they decided to live in Agate with humans to escape the daily life on the sands, but seeing the sands itself just outside the village had made him feel at least a little better.
When he evolved to a Charmeleon, he continued to live in the village, but each day though he trained day in and day out to one day be strong. A moved handed down from father to child had ran in the family for generations and Shadow was able to learn it from his father while a child became of great use when dealing with ghost types and each victory had made Shadow even stronger. After his parents decided it was time for Shadow to find his own path. They talked with him and since then Shadow has wandered the desert fighting battle after battle and returned to Agate each night happy to see his parents again.
Years gone by after Shadow became an Adult and evolved into a Charizard. His eyes glowed though he had no idea why. The village elder thought of it as something of his genetic makeup, but his theory proved right that Shadow was a very rare born shiny that had a mutation during the time he was in his egg. Shadow began taking what others said about his coloration seriously and decided to fly off to the middle of the desert where he could be alone for a while. When he got back though his parents had worried that he got hurt. The Charizard talked with his parents telling them he's going to train somewhere far away to get stronger. They tried to convince him not to go, but he made up his mind and told them he loves them and he'll return in five years time.
While he was training, he fought many strong pokemon and met new ones that he was unfamiliar with. They all put up a good challenge to Shadow, giving the charizard a real good fight. After training for five years, Shadow decided it was time to return to Orre and see his parents.
The epidemic struck and Agate was near that of a ghost town. Shadow returned from a far away land to return to his parents seeing not the smiling faces of the villagers and his parents, but a barren wasteland that was once their home. Suddenly undead pokemon started coming out of the sanctuary as he realized this wasn't a fight he could win single handedly. Fleeing the village, he wondered what happened to the region as he was away for a while. Before he could land though he was teleported away from Orre and doesn't know where he was sent to.
User notes
-Born as a mutated shiny due to his eyes glowing
-His eyes glow, but he worries it might startle other living pokemon
-An OC of mine costumized for EJ regulations
-Doesn't like being judged on his coloration and gets angry from it.
-Image by Fox

To the Main PC please
Mewtwo

As a note the mutation would be his eyes glowing because that is not normal, the purple coloration is just normal shiny. Charizard naturally have very normal iris and pupil.

To the Main PC Please.
Mewtwo

My apologies on this taking so long, Shadow. Things have been a bit crazy since all the quarantines hit and I seem to be behind everywhere. I hope I did not hinder the team this is going to by taking so long.


My only note is you have Shadow Claw listed as a level up move instead of TM (or judging from the character history a Bred move from the Father) but that won't hinder approval. Just make the appropriate edit when you see this.

Its all good, your health is more important.
Sponsored content