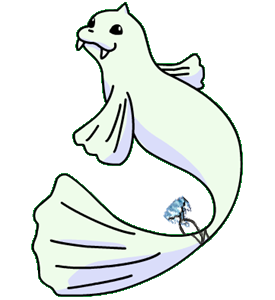 Pokédex Entry- It loves to snooze on bitterly cold ice. The sight of this Pokémon sleeping on a glacier was mistakenly thought to be a mermaid by a mariner long ago.

History-
Nerissa hated being a Seel. Ever since she caught a glimpse of herself in an iceberg she felt hideous. As a wild Pokemon, she wasn't afforded the luxury of a trainer, who would groom her and pamper her to make her pretty. Nope. She just got to be dull, boring, and worst of all...lumpy.

And what was the worst bit about being a Seel? Well, of course it would be the fact that your tongue just hangs out, all of the time, because it is just so large. Oh how Nerissa wanted to be a Dewgong, like her mother. Mother was beautiful and graceful, her long body moving so elegantly through the waters. She didn't have to suffer with a lumpy body, a lolling tongue, and stubby little fins. No, the only thing Mother ever had concerns with was holding back that large, radiant smile of hers.

Nerissa felt, because of the way she looked, that nobody would ever like her. So she tended to just, well, stay away from everyone. She became very shy and reclusive, much to Mother's dismay. In order to cheer up her little girl, Mother brought her a piece of NeverMeltIce that a trainer had dropped. It sparkled and glimmered like the icebergs they called home and Nerissa loved it so. It had a bit of string around it that let the little Seel wrap it around her tail so she wouldn't lose it.

A few years passed and all seemed well withing the Dewgong/Seel colony, when a strange occurrence started. The waters started becoming dark and hard to swallow, and Pokemon were being attacked by normally peaceful types. Concerned, the colony began to move further into the icebergs, noticing that the cold seemed to keep out the strange waters. But, before they could reach their breeding grounds, a massive group of Tentacruels attacked. Nerissa and her mother were separated by the violence and she fled deep into the ocean.

After a while, exhaustion took over and Nerissa had to stop. It was then she noticed she had no idea where she was. She had been swimming for hours, and nothing looked familiar. What was she going to do now? Mother was gone, and could only be assumed dead, and her colony was nowhere to be found. Home was miles away. With heavy heart the shy little Seel began swimming, hoping that somehow she would find one of her colony, or at least her way home.

**After joining a small group of Pokemon the poor Seel was attacked by an Undead Kingler. Alone and terrified, she had to fight back to save herself and after a terrible ordeal was able to defeat the creature and finally evolved.
User Note-
-Now that she has evolved, Nerissa doesn't feel quite as lumpy, but still has a hard time convincing herself that she is pretty

-She is very shy

-Will only attack out of fear or necessity, usually she prefers to settle things peacefully

-loves to help, and will try to mediate any fight, but because of her shyness she sometimes gets overlooked

Really, really, REALLY old character from EJs early days lol. She will be updated if I get a chance to activate her.