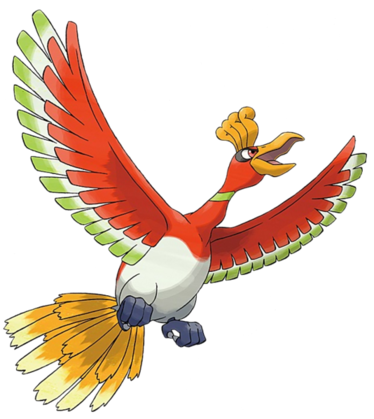 Name- Ho-Oh
Gender- Genderless (but prefers to be referred to as he)
Level- Unknown
Moves-
-Sacred Fire
-Recover
-Extrasensory
-Sunny Day
Ability- Pressure
Nature- Careful
Characteristics- Somewhat stubborn
National Dex No./Species- #250 Ho-Oh, the rainbow pokemon
Height- 12’06”/ 3.8m
Weight- 438.7lbs/ 199.0kgs
Pokédex Entry- A legend says that its body glows in seven colors. A rainbow is said to form behind it when it flies. It is said that those who see Ho-Oh are promised an eternal happiness.
Item- Sacred Ash

History
For centuries Ho-oh has been looking down at the human with nothing but hope, and many times they seemed to be testing his belief on them over and over again. The biggest test of his patience was the war that broke out hundreds of years ago, causing the bell tower to burn down to the ground, with many innocent people and pokemon caught in the crossfire. He even took pity on three of the pokemon that were not so lucky in the brass tower, reviving them, each embodied with what the tower embodied; the thunder that struck the tower, the fire that burnt it down, and the healing rain that calmed the flames and saved many lives. He gifted them with more power than before so that they may help innocent pokemon that cannot fend for themselves. Even after they rebuilt the tower, he would not return, though that did not stop the humans from trying almost any means to encounter him.

Since then, he has been wandering all over the place for someone to reassure his beliefs that humans are worth placing trust on. Hundreds of years he has been traveling, from route to route, from city to city, from one region to the next.

He was had been very far from any region, going to remote locations trying to find such references of purity and maybe hope that humans and pokemon can really live in harmony when he took notice that things have gone really bad. But by then, things have spread farther than he could have imagined. The purity of pokemon is being perverted, which saddens him, he had to know why, why these things were happening. Is still searching, though now he searches for the truth, seeing the horror that is happening on the way, but still finding solace in the small miracles he finds, such as purified lakes, clear evidence of his suicune’s generosity.