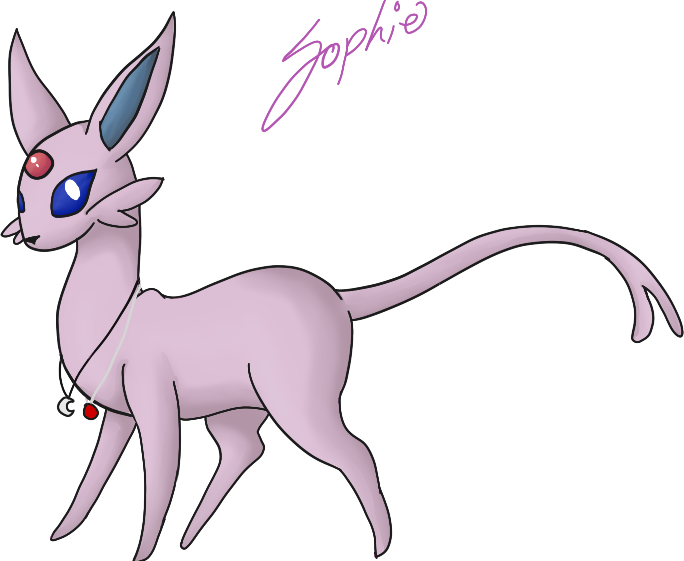 Pokédex Entry- An Espeon is extremely loyal to any trainer it considers to be worthy. It is said to have developed precognitive powers to protect its trainer from harm. By reading air currents, it can predict things such as the weather or its foe's next move.
Level- 16
Ability- Synchronize
Nature- Serious
Characteristic- Alert to sounds
Moves-
- Tackle (level up)
- Confusion (level up)
– Quick Attack (level up)
– Psyshock (learned by TM)

History- (After the Epidemic)
Sophie woke up to a quiet day in Azalea Town. She lifted her head, gazing out the hotel room window, and stared into the city. People were walking along the streets, looking into the shop windows, sipping coffee on their way to work, children playing and getting in everyone's way. It seemed to be a normal day. But something was off about today. Sophie's senses told her something was very wrong.


Her hunch was confirmed as a scream sounded from a ceramics shop across the street from the hotel. Sophie watched in shock as blood sprayed the window of the shop. A moment later, a Liepard burst out of that very window. It's fur was stained red. It's eyes held a frightening and dangerous glare. It seemed to glow a sickly purplish red color. It looked otherworldly. People in the street saw the same thing Sophie had just seen, and fear lit their eyes. Suddenly the street was crowded with people running in all directions, trying to get away from the Pokemon covered in blood. The Liepard glanced up into the hotel window, eyes locking with Sophie's. A chill ran through her.


Sophie jumped as her trainer burst into the room. A look of fear was in her face, too. Without a word, the girl grabbed her bag and scooped up Sophie. They were out the door in an instant. The Espeon didn't wonder where they were going. She knew. They had to get out of Azalea Town, quickly. It was suddenly not safe here.


As they left the hotel, Sophie saw the Liepard, a lot closer than she wanted to see it. Time seemed to slow as she watched it. It was attacking a human. The human's Herdier tried to come to the rescue, but it's counterattack failed as the Liepard grabbed the dog Pokemon's throat between it's teeth and pulled. Sophie felt sick as she heard the cracking of bones and saw the dog's throat literally being pulled out of his neck. Blood went everywhere. This was not how Pokemon were supposed to battle. The human was frozen with shock at what had just become of his beloved Pokemon. He was too traumatized to even realize the Liepard had turned it's attention on him. Sophie's trainer turned and ran away as the human's shrieks pierced the air. The Espeon was glad she didn't have to see what was going on behind them anymore.

Sophie's trainer ran until she reached an alleyway where the screaming was barely audible. Panting heavily, she put Sophie down and took out her Pokeballs. The girl released all of the Pokemon she was carrying: Nonny the Pachirisu, Tank the Blastoise, Dash the Braviary, Evangeline the Deerling, and Ember the Ponyta. Sophie's Pokemon friends looked around confusedly. They hadn't witnessed the horror she and her trainer had. The girl put her hands on her knees and gazed kindly at every one of her Pokemon. She spoke to them urgently.

"Something is going on. Something awful. I'm not sure what it is, but all Pokemon are now considered dangerous, and they want all Pokemon quarantined. But I won't let them take any of you. I can't trust them not to hurt you.


Appearance- Sophie is a normal Espeon, though she has deep blue eyes that set her apart. Around her neck she wears two necklaces, a crescent moon pendant on a black chain, and a red gem pendant on a silver chain.
Personality- Sophie's personality is one of optimism. She believes a cure for the epidemic can be found and that she will be reunited with her trainer, no matter how slim the odds. Despite her positivity, she's careful and won't approach another Pokemon unless she can tell they're living. If she sees a dead Pokemon, she'll walk a good distance to get around it without having to go near it, in the event it rises as she passes. She always tries to be helpful to others she meets, and she's protective of those who become her friends.