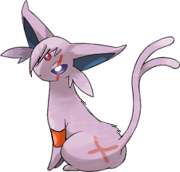 Height-
1.0m
Weight-
26.0kg
Pokédex Entry-
Espeon, the Sun Pokémon. Espeon are able to read air currents allowing it to predict the future as well as its opponents' next moves.

History
As an Eevee, Leona was never much of a fighter. She relied on those close to her for safety and would never join combat.

That all changed, though, when the epidemic arrived. What was once a peaful family collapsed into ruins. Both her parents got infected and she ran for her life, never looking back. They had tried to kill her, after all!

It took a long time before Leo managed to evolve into an Espeon. She trained herself in the art of fighting and survival, finding joy in brawls and arguements.

Soon, she came face to face with her mother, a Flareon. With blind hunger, her own mother lunged at her, eager to kill. The fight seemed to go on for a long time, but in the end, Leo arose as the victor. It was a hollow win, though, because now, her own father is looking for her, her own father who is eager to turn her into Murkrow food.

Psst, the title's supposed to be Leo the Espeon.

And, as a side note, I referred her ^^
Suicune

Approved.
Your new profile image will have to have the sash included as well.
Also transparent background.
Your character will be placed on the Underground team.
Guest

Yes.. I will try to upload my image as soon as possible. Thank you for accepting this.
Suicune

You'll need someone to make this an image with a transparency.
You can request it in the same place as the art. :D
Guest

I'm going to change the image. I've already requested for one and now I have it. Thanks.
Sponsored content