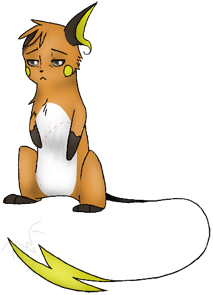 History:
From the moment he was hatched, his trainer and himself wanted nothing more than to evolve. But without being a proper Pokemon Trainer, Maxwell's trainer did not know what would cause his evolution. But the pair were determined- they were sure, if they put their minds to it, they'd find their wish would come true,

They trained. Every day, every moment, was the same routine. They'd wake up, hike out to their regular spot, and jump at any passing trainer and challenge them to a battle. At first, it was only loss after loss, but the two did not lose face, instead telling themselves that if they put their minds to it, anything was possible. So they trained, and continued to, until the days came when their losses became wins. Their diligence had paid off.

But Maxwell still hadn't evolved. Despite their efforts, and their strong friendship, the little Pichu, was still sadly, a Pichu. Deciding that traveling was their next option, the two of them packed up and set towards the Pokemon League, recalling stories of Pokemon Trainers climbing the ladder with fully evolved Pokemon.

If they put their minds to it, they could accomplish it. Maxwell's trainer had easily overcome the first few Johto gyms with Maxwell alone, but soon enough he noticed that Gym Leaders were out more often, and that people stayed in their houses more than usual. Agreeing together that investigating this matter would help their journey in some shape or form, they arrived at a sight where the Gym Leaders were said to be.

What met them was a charging Arcanine. With one bite of its mighty jaw, Maxwell had fallen, one side of his miniature body heavily bruised. The Pichu had passed out, but when he awoke, his trainer's body was no where to be found. Flames surrounded him, and Maxwell couldn't remember where his mind was put to.

Appearance:
Although Maxwell himself doesn't remember (if he knew at all), his right ear had been bitten off, thus cutting off his hearing on that side. He can sense vibrations, however. The infected Arcanine that had taken his ear had also bitten Maxwell's body, though mysteriously the large canine fled before it could finish the job. What also stands out are his dull gray eyes, flat and emotionless - sometimes. When his anger spikes up and the infection gets the best of him, his eyes flash red with malice. He also tends to run on all fours, although he can walk on two feet.

Personality:
Maxwell evolved into a Raichu post-infection, and even though that has stabilized the virus within him, it has also instilled a sort of dual-personality; what he has called 'the Voice', is really his other personality (or the virus, but it's not clear as to what it is) that fuels his anger and directs it towards the living.

Maxwell is confused about many things, unsure of which path he had taken. Is he good? Is he evil? He doesn't know whether or not he is the enemy, or a fallen comrade. Often questioning everything, the Raichu has been through a lot at his young age. He will often input things that are important, but he is only able to do so because he has suffered emotionally battering events.

Negative's Notes:
- He has anger spells, but he can think just like any other Pokemon

All My Characters Are Trans
Negative10