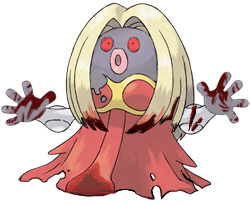 Character Sheet
Name: Siren
Species: Jynx
Approximate time of infection: One week after the outbreak.
Known Moves: Ice Punch, Lovely Kiss, Heart Stamp, Attract
Height: 1.3m
Weight: 87.3 lb.
History: She was given as a present for a young upcoming trainer before she was hatched. When she finally hatched as a Smoochum, the female trainer was overjoyed. It was her that gave her the name Siren, planning to utilize her Attract attack in doubles battle to leave the enemy wide open. She was loved by the trainer and her two other pokemon, they did their best to protect the little Smoochum. Siren did her best to please her trainer, and finally the day came when her hard work paid off and she managed to evolve into a Jynx.

He trainer though, was not as happy. She found her new appearance unpleasant, even going as far as to call her “Ugly”. Her team mates, not wanting to turn on their trainer never stood up for Siren. It was not long before she was abandoned in the wild, having to look after herself. She was heartbroken, all she knew was how to be a trainer’s pokemon, and she never really learned how to live off the land. Luckily for her she quickly met a Mr. Mime. It was like love at first sight for her, he had always been a wild pokemon, so he taught her the ropes on how to live as a wild pokemon, and she learned to trust in others again. That was how they lived for a month, until the infection broke out.

They had been scavenging for food together when the forest erupted with noise, just about every pokemon in the vicinity started stampeding right past them, luckily Mr. Mime had put up a protective barrier for them both so they wouldn’t have been trampled. But because they needed to stay in one place meant that whatever they were running from would quickly be on their tails, and indeed it was, it was a rampaging Rhyhorn coming towards them. This Rhyhorn seemed a lot different than any she had seen before, it was darker and meaner looking, but worst of all it looked like it had parts of its bone showing on the parts not covered with blood.

They ran for their lives, and they might have outrun it if it had not used fissure to part the ground causing for her leg to get caught in the crack. She reached out her hand and grabbed her love begging for help before it caught up to them, but he had other plans. He smacked her hand away and chose to preserve his own life instead. She looked on at his retreating back no longer caring about her life; she barely felt it as the Rhyhorn dug into her side and ripped a chunk of her off. She wasn’t sure if she was sad or happy as it left her to bleed to death in search for better prey, but she didn’t care, it was too cold to care.

Now she roams the land casting her revenge on any and all pokemon, seducing the men into her hungry mouth, and beating the judging women to a bloody pulp.

User Notes:
-Seduces Men with Attract and puts them to sleep with Lovely kiss before devouring them
-Has a bit of a hip sway when she walks

((Don’t know what heart stamp looks like, so I’mma say she blows a kiss that hurts you if it makes contact))

((Thank you Slange for the pic))