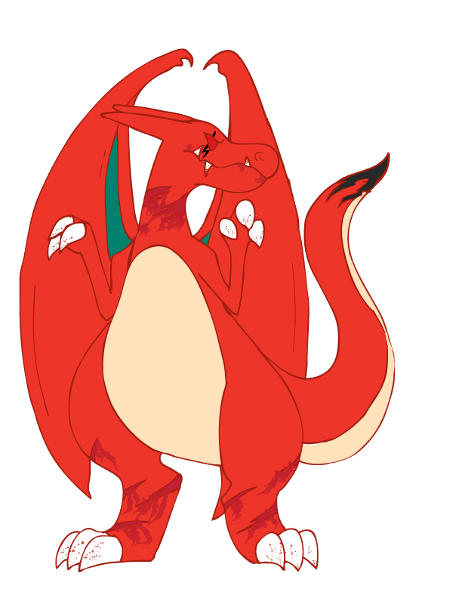 Approximate time of infection: Not quite long ago.

When Ragna was young, she lived with her parents, a salamence and a
charizard. They all belong to a human, who took care of them, and in
exchange they fought for him. It was like some sort of sport to the
human, and to her parents. She was the only one in her ‘family’ that
disliked fighting. She believed that there didn’t need to be fighting.
But her parents wanted her to, and she did sometimes to make them
happy.
But no matter what, there was something wrong. She wouldn’t evolve.
When her trainer found out, he wasn’t happy, and he separated her from
her parents. She cried and whined, but there was no way out. He pushed
her into every battle, as he believed that it would help her grow
faster, to make her evolve. One day she did evolve, and on that day,
he was so happy that he took Ragna back to see her parents again, But
once again, on the field of battle. She fought alongside her father,
the salamence. Ragna was happy to see her family again, but her father
wasn’t. He growled at her, as if she became a different person. He
wanted to fight on his own, like he didn’t need someone else’s help.
She knew he always acted like this, but to her?
After that battle, which they had lost, Ragna wouldn’t talk to him.
She was sad, thinking about her problems. She decided that she would
run away from home, find a place where people liked her.
She flew away in the middle of that night, and never to be seen again
by her family. She stopped and made her home in a cave near the
mountains. She decided that she needed no one to help her.
On one evening, there was no one around, and it was normal. She went
out in search of food. There was another dragon, larger and stronger
than her. It attacked her, but it wasn’t for any apparent reason. It
was just like it wanted to kill her.
They fought, but as Ragna disliked fighting, and didn’t do it very
much, she wasn’t good enough to fend for herself against it. She fell
unconscious. She was covered in some slashes and bitemarks.
Eventually, she got up again, and she thought she was fine, other than
her injuries. But she wasn’t…

-she is lighter and shorter than of a normal charizard, as she is not full grown.
-she has no tail flame. its pokedex says that the tail flame is a measurement of its life, and in this case, it is undead.

The image is ready.
Mewtwo

A couple of points.

Level is now required on Undead profiles as well, and Flamethrower is learned after your level cap of 45. So if she were to have it, it would need to be a TM.

Also, she wasn't infected in enough time to survive the attack by the other dragon. The infection would have had to be working in her system by the time she died in order to 'wake up' again. She would have just died.

Would this go into WIP until it's fixed?
*is moving these as fast as you deal with them, just checking*
Mewtwo

Is it better now?
Kyogre

You need to go through and do a Grammar check, and it needs to have the level of the pokemon in the profile.
Guest

I have typed this up on Word, and done a grammar check there. No green lines. That why it is aligned funny.
I am not dure what you mean by 'level in profile.'
Guest

Sorry Ihave not and currently cannot look at the undead charcter sheets now. I have put her level next to where it says 'species of pokemon'
Guest

I have fixed it.
Mewtwo

Birthmarks do not work that way. Birthmarks are patches of skin that are discolored, and while they do vary in size and shape, they are never in a line. They are blobs that people can sometimes say resemble a shape. What you have would either be a tattoo or a scar, but not a birthmark.
_________________

Ok then, its a scar.
Mewtwo

I fixed it.
Mewtwo