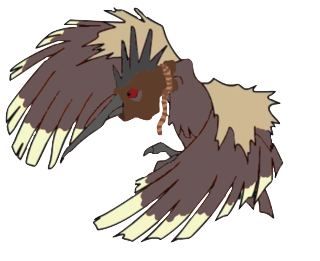 Name:
Crane
Species:
Fearow - Mutated
Approximate time of infection:
Five Months Ago
Known Moves:
Ominous Wind (Tutored), Tri-Attack (Egg), Toxic (TM), Double Team (TM)
Height:
6’2”
Weight:
80lbs
History:
Crane was the beloved battle pokémon of a young man from the Kanto region, and the third on his relatively amateur team. Whilst the team lacked strength to compete against the region’s gym leaders, they were all relatively close-knit and spent their days training against the many wild pokémon on their travels, occasionally welcoming particularly promising individuals to the family. However, Crane was different. He knew he was the weakest member of the team, and no amount of TMs would ever make him feel worthy of fighting alongside his companions – so, he sought to avoid contact with them. He wasn’t a friendly spearow and his trainer soon began to notice his lack of social cooperation, but without the heart to release him, his trainer simply kept him as a pet. Although he was unsure of the idea at first, Crane eventually settled on spending his life perched on the human’s shoulder to observe the battles in which he soon became interested in.

Crane never missed a move when perched on the man’s shoulder and was soon becoming increasingly curious about the battle tactics or often lack of tactics that the battle’s participants possessed. He could spot so many recurring flaws and blamed the battlers despite their obedience to the trainer’s orders, but could find no way of voicing his disgust at the reckless, impulsive attacks. As time passed, Crane neither grew or decreased in his strength and was instead gifted a trip to a move tutor in order to boost his confidence. Despite the duration of Crane’s new lifestyle, the human still hoped that one day the bird would return to the fighting ring and had offered the pokémon a pair of useful TMs in past years as a hint for the pet. Crane dismissed the man’s attempts to train him, remaining far too accustomed to the life of an onlooker to get his claws dirty now.

When the epidemic broke out, the majority of humans had been warned to disown any pokémon they may possess, but Crane’s trainer was adamant. He had too much adoration for his team and as of yet, little news of the infected pokémon had reached the media. Ignoring the rumours, the trainer continued battling, however in one such battle, his rapidash was pitted against a particularly aggressive mightyena. Neither human was aware of the mightyena’s infected state and it was too late by the time realization kicked in. The canine slaughtered the screaming rapidash before moving on to lunge at Crane and his trainer. Screeching in shock, the spearow felt the canine’s teeth pierce the flesh around his small body, but was relieved when the humans wrestled the canine away. Bleeding profusely, Crane passed out whilst a nearby police officer shot the infected mightyena dead.

When Crane came to, he was in a pokémon centre with a number of humans adorning goggles inspecting him. He was scared, but something in the depths of his mind was oozing a previously unfelt violence. He looked up to see his trainer watching behind a glass screen a look of concern blasted across his face. Struggling to his feet, the humans were shocked at the bird’s recovery but were even more so at the usually docile, cowardly creature’s lunge towards the nearest human – a deafening screech as it clawed away at the man’s face. In the moment of panic, a human pried the bird away before roughly placing a sack around its head that had previously been used to carry him to the centre. Crane could hear his owner furiously hitting the glass as he suddenly found himself struggling to breathe in the darkness. His wings flapped maniacally as he was strangled by the man until his body fell limp. He woke up a few hours later in a skip outside the building.

Still blinded by the sack secured around his head, he struggled his way out of the bin before launching himself into the air, flying both awkwardly and blindly into the sky. It was only a matter of time before he crashed into a tree and was forced to land roughly on the ground. Aggravated and hungry, Crane attempted to remove the bag around his head but instead settled on forcing a hole for his beak and using his claws to tear two holes for vision. With the advantage of his sight back, Crane set off in search of his first kill as an infected. It was only a rattata but he was merciless in his attacks and soon found that he wasn’t satisfied; he wanted something bigger. In order to bring down his next target, a stubborn tauros, Crane put his tactics to work. He used toxic on the creature and simply followed it until it collapsed before tearing away at its carcass – the taste was slightly tangy from the poison but Crane hardly noticed it. A few months later, Crane had rapidly grown in strength and eventually evolved into a fearow. The process was exceedingly painful and the bird grew almost twice the size of a normal fearow – a massive wingspan, particularly sharp beak and a darker colouration. However, there were downsides. Many of Crane’s joints stuck out awkwardly and were delicate to the touch, whilst he was deeply underweight and the bag remained secure around his slim head. Regardless of the mutations, Crane was pleased with the physical transformation and used it to his full potential. However, the evolution has wreaked havoc in his mind. Crane is rapidly losing his grip on reality – he hears voices, sees things that aren’t really there, attacks and moves without meaning and has only recently begun to harm himself. Yet as his life slips into an ugly hallucination, Crane only grows hungrier.

User Notes:
- Crane is far larger than the average Fearow due to the fact he evolved when in an infected state – this gives him more height, a more curved beak, a larger wingspan although somewhat delicate joints.
- Despite his stature, Crane is underweight and very physically weak, almost fragile. He has bad bone structure meaning most physical attacks leave him gasping for air and because of this he usually attacks from a distance or poisons a pokémon and simply follows them until they pass out.
- Crane has a sack attached around his head from where a human had attempted to suffocate him many months ago – however, he has been unable to remove it. Instead, he has torn holes in it to allow him vision, room for his beak and his feathers.
- To survivors, Crane appears pretty much insane. The evolution process has dramatically corrupted his mind - he hallucinates, self-harms, hears voices and often loses control of his body altogether.

- His appearance and name are loosely based off Jonathon Crane (The Scarecrow) from Batman.

With the amount of time passed between the infection point and now, there would be very little intelligence left, especially since a fearow has no resistance to the virus. You can augment the infection period, though, to remedy that.

While there's nothing blatant about him, please keep your crossover character to as canon as you can. (You did a good job; I didn't realize who he was based off of until your footnote.) Just get the image -which you are- and augment the infection period and I'll take another look.
_________________

Ah, sorry about that - I misread the most recent update about semi-intelligent infected pokemon! In that case, I’ll take off a couple of months and make him a bit more insane to fit the new post-infection evolution description c:
Lugia