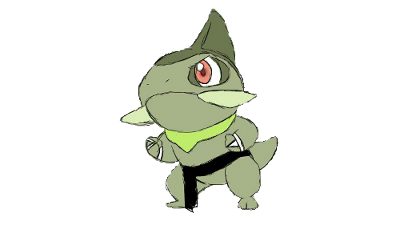 Name- Shapps
Item- Black Belt
Gender- Male
Age- Child (8 or 9-ish)
Species- #610 Axew, The Tusk Pokemon
Height - 2’00”
Weight- 39.7llbs
Pokédex Entry- They mark their territory by leaving gashes in trees with their tusks. If a tusk breaks, a new one grows in quickly. (White)
Level- 14
Ability - Mold Breaker
Nature- Brave
Characteristic- Proud of its power
Moves-
Dragon Rage (Level)
Dragon Pulse (Breeding)
Giga Impact ™
Protect ™
History
Shapps was… Awesome. Even before he was hatched he knew he’d be awesome and no one could tell him otherwise. His mother was a Haxorus and his father a Hydreigon thus giving him the lovely move Dragon Pulse. Shapps’s parents were owned by a powerful Dragon Tamer so when he was born of course it was a happy occasion. Since he had long lost his hard heart, the man trained Shapps gently never scolding the child too severely and praising him greatly when he did well. However Shapps did not want to become spoiled so most of his toys and presents were left to collect dust except his Black Belt. He didn’t know any Fighting type moves but it boosted his determination enough to learn moves like Giga Impact and Protect. At one point Shapps hurt his little hands and had to wrap them in bandages. That was the eve of the Epidemic.

Shapps woke to the agonized roar of his father. A Beartic was biting and snapping at him. Shapps was frozen with fear. He had no idea what to do! His mother snatched him up and ran. Shapps cried and cried for what was happening and his father. His mother dug a deep hole and stuck him in it before turning to face their pursuers. Shapps curled into a ball and cried softly trying to block out his mother’s cries of rage and pain. He dug himself out and his mother was nowhere in sight. Shapps whined and ran home only to find it destroyed. He dried his eyes and tightened his Black Belt around his belly with new resolve. Revenge and finding his parents dead or alive… Shapps now runs into battle with every bit of courage he can muster.
Appearance
-He is very small since he’s still just a kid
-He has a Black Belt around his belly and bandages around his wrists and hands
Personality
-Shapps believes he is all that and a bag of chips half the time (thinks he’s awesome)
-He doesn’t care if he’s fighting an infected Caterpie or Tyranitar, he will fight and win or die trying
-Shapps doesn’t like to be touched, told what to do or looked at funny
-Running at him is not smart since he is young and does not know the difference between the Living and Dead

Me gusta so hard :D
Mewtwo

He is also ridiculously overpowered for one so young. Keep in mind that he is only a child and is still only his first form. Even with Dragon Pulse and Giga impact it would do almost nothing to a fully evolved or high level Pokemon.

With this in mind, and editing the age field appropriately, please let me know if you still wish to continue with the character as is.
_________________

Yes, but still keep in mind that he is very low leveled and a first stage. He cannot do much damage to anything stronger than him despite his moveset. No godmodding or overpowering.