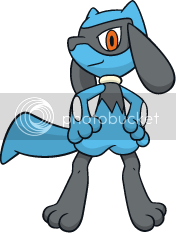 name: shaman
item: reaper cloth
gender:male
age: 13
species: 115/riolu
height:2'04
weight: 44.5 pounds
pokedex entry:They communicate with one another using their auras. They are able to run all through the night.
level: 21
Ability: inner focus
nature:brave
characteristics: often dozes off
moves:
force palm
endure
counter
reversal
history: Shaman had always been a lonely pokemon humans and others of his kind annoyed him he always considered himself being too good to talk to any of them. His normal day had been filled with him defeating pokemon that had made him mad and teaching trainers a lesson about being on his turf their ignorance amazed him how they could walk through his forest and epic to not be challenged. He soon made it his life mission to keep the forest pure of unworthy pokemon and trainers alike.

That all changed one day. It had grown late almost midnight Shaman was making his late night rounds through his forest area he hadn't expected what would unfold. The pokemon of the forest had came to an agreement Shaman would have to leave, but they knew he would not do this he had been asked to stop his ways many a time before instead listening to them Shaman would give them a swift justice for being on his forest area again. So the pokemon had agreed, and at the time of shaman's round they had set up on what he considered his turf and all the fire types of the forest lit Shaman's area ablaze.

Shaman had noticed almost instantly that his forest was on fire, but he didn't care no forest fire could best him! Besides he had already found new prey a trainer and a charmander. As he followed them the forest blazed and the two picked up speed so Shaman did also he had move to fast he should have been paying more attention he'd leaped onto a weak limb and it snapped Shaman fell and tumbled to the ground he'd landed wrong on his leg it was broken the fire roared behind him advancing he yelled he didn't think anyone would come he'd die here. Shaman's eyes filled with fear and just as he lost hope he was rescued by the two he had just been following in an attempt to attack them. He became best friends with the chrmander and they faced the plague over the land together.
The Charmander's name was Micheal they faced the plague with their wonderful trainer. They raced across the land going to every camp they could only to find it on the verge of complete annilahation so they would run every time they would run.They eventually came to a point where they ran but their trainer was too slow and Nidorino was able to catch him and kill him with a stab to the heart. Shaman and Micheal were able to escape and now try to survive in this plague ridden pokemon world.
appearance: Shaman looks much like any other riolu the only defining thing would be his blank look he always has when talking to anyone he considers below him as thou they bored him. His body posture is always that of someone with a higher ran and authority then anyone around him even if he is not.

personality: Shaman is very selfish and conceded. He considers everyone below him and will often times ignore everything you tell him unless he considers it a smart enough comment to be replied to. The only person he ever will acknowledge at all times is Michael Heat the very charmander that had saved his life and his best friend.

this file is ready to be approved
Guest

Zash, this needs an image before it could be approved ^^

Also there's a couple of punctuation mistakes in the history, but nonetheless, this is an awesome profile xD
Jay

Oh and Zash, there is some grammar rules, no intention to be rude, but I don't want you getting a warning for grammar issues. ^^ Just trying to help.
Guest

I'm pretty sure I fixed them
Mewtwo

Image needs to be centered and have the item he holds in it.

His age would put him in the realm of Adolescent, but unless he is almost and Adult (which at 13 he is nowhere near it) his level is way too high. I would put him barely over 20 because he barely passed the bar.

Species section needs to read like the example in the hatchery. (dex number/species name/species). Species and dex number do not get separate sections.

His moves would be better if you seperated them by line.
Example:
Moves-
force palm
copycat
counter
reversal
Which, since I recommended altering his level, may need to change.

Your history only mentions the epidemic as a side note in the last sentence. It has been raging for a year, it should have more mention as to how he first encountered it and why he struggles to survive.

Moving this to WIP since there has been no improvement for nearly a week. 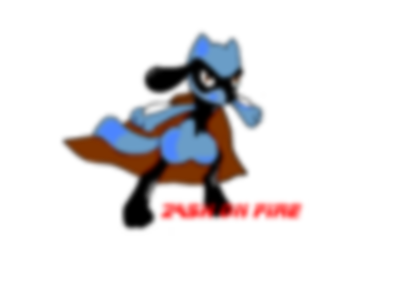 this should work as your Pic broski

And sorry for it being blurry

Torchie, you linked a thumbnail, dear. That image is nowhere near large enough. It also needs the white removed, and the grey background changed to transparent.
_________________
Maintainence/Coding Admin

okay should be perfect now!!
Mewtwo

I apologize, but the image needs to be clear. I know they are trying to help you but it cannot pass with that image.