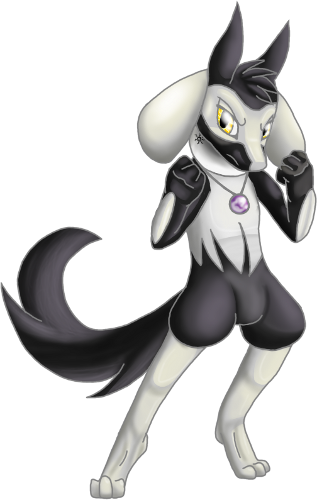 Pokédex Entry-
It has the peculiar power of being able to see emotions such as joy and rage in the form of waves.
Level-
22
Ability-
Steadfast
Nature-
Gentle
Characteristic-
Strongly defiant
Moves-
[/color]

History-Yue and Ilo were purchased as an egg duo by a wealthy family, who specialized in collecting rare Pokemon. Their parents, though unknown by the kits, were often bragged about by the owners as being particularly rare, and bred specifically to produce odd-colored offspring solely for this wealthy family. But the Riolu brother and sister were given everything they could want for, and felt like they were loved.
Until Yue was sent away to a special training school.
Ilo was crushed, being apart from his sister for the first time, but he waited.
And waited.
But never heard again from his sister.
So he went to this school where she had been taken, only to find that it was full of nothing but pain and despair. He decided then that he needed to break her out. He was caught by the officials and sent to a government holding facility, where he managed to rally some allies there and break himself and his sister out.
Many of them died in the process, but the siblings and a few comrades managed to escape under the cover of night.

What he thought was going to be a happy reunion turned out to be a painful revelation; his sister was terribly scarred mentally. Her mind was in shambles; she was barely able to speak cohesively, often crying out or mumbling complete nonsense. She would be passive and unresponsive, then maniacal and enraged the next, without any kind of outside stimulus. But despite all this, Ilo stayed with his sister, trying to find a way to help her while keeping her out of trouble.
But this proved harder than it seemed; Yue disappeared right under his nose, without any warning. And due to her intense training, she is much faster and stronger than he is. But he still hunts for her, while she wanders, hiding from those that experimented on and tortured her.

Black fur, with white patches.
Both have orange eyes.
Both have small birthmarks that resemble the moon and sun, respectively. Yue means moon, Ilo means sun.

- Quiet, but more logical than his younger sister. Prone to being a brat sometimes, as he was raised high on the hog. Holds a resentment towards his sister for taking him away from his home, but also feels guilty because of it. His love for her outweighs everything else though, and would never hurt his sister. He's not as brave as her, and would rather hide than fight.

User notes:
- Based a bit off of River and Simon from Firefly.
- Has had training in medical facilities, but almost nothing in battle training. He's purely a medic.

Your Moveset does not work as your character only qualifies for BW rules, not BW2. Copycat is learned for her qualifications at level 29.