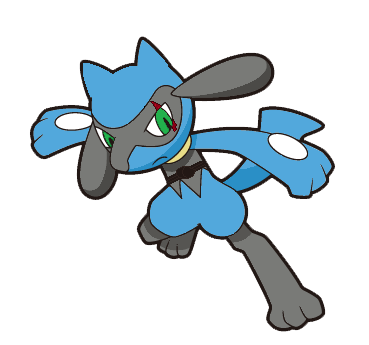 Characteristics- Varies between his normal personality, and a 'Battle Sleep', depending on the situation.

Has a Scar across one eye.

Pokédex Entry- It has the peculiar power of being able to see emotions such as joy and rage in the form of waves.

History
Seruru was born as the runt of the Litter, with a minor colour difference (That being a darker shade of blue), and an unnaturally green pair of eyes, for a Riolu anyway.
He was Abandoned by his father during a family outing when he was no older than seven weeks old, where he was then adopted by an Elderly Lucario, who raised him under a firm, but fair, fist.

Seruru grew up in a forest, learning to fend for himself under the instructions of his adoptive Father, and becoming capable of sensing the Aura of living things in the process. Seruru was only young when he showed how loyal he was capable of being, taking a Solar Beam to the chest in order to protect Lucario.
After he'd recovered, Lucario taught him to fight, sensing Dark Aura over the Horizon.

After Lucario left on a Pilgrimage, Seruru was left to watch over the forest, and it wasn't long before he noticed things were changing. Pokémon were preying upon each other, and the ones that weren't, were fleeing.
Seruru had, luckily, watched the Infection gradually take hold from the tree branches, and knew the forest well enough to hide himself from the Infected Forces, though not without first gaining a Scar from his first encounter with an 'Infected Butterfree'. Or at least that's how he tells the story.

Devoid of Purpose, now without Mentor and Land, Seruru left the safety of his forest in pursuit of sanctuary, careful to stick to the back roads, and steer clear of the Long Grass.

If you can read the rules first.
Then, you'll need either an artist to modify your image to include the blackbelt it carries, or you can do so yourself if you did the artwork.
If you want one of our staff artists to do so, you can request it in the artists' alley.

He will be approved and assigned to a team once you read the rules.
Suicune

Great. Just a note, if you can use the riolus' adjusted transparent background image, it would be appreciated.

You will be joining the Union team, and your turn will be after the Kirlia.

What do you mean by Adjusted Transparent Background Image?
Suicune

For future usage in your RP, you should use this one.
It's your artwork, but the white background was removed.
Transparencies are required of the images. ^^
Sponsored content