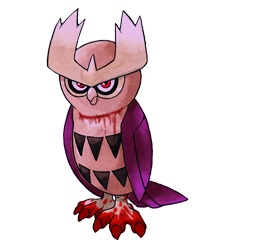 Name;
Turpin
Species:
Noctowl
Gender;
Male
Approximate Time of Infection:
Six Months Ago
Known Moves:
Confusion, Air Slash, Extrasensory, Ominous Wind (Tutored)
Height;
5’7”
Weight;
90lbs
History;
Born and raised by a young couple living in Mauville City, Hoenn, Turpin spent the first few years of his life as a pet hoothoot with only very basic moves and next to no physical strength. However, this soon changed. The husband was a budding artist and longed to travel throughout the region to study and observe the various pokémon species found in Hoenn, and the only way of achieving this was having some form of protection in the form of Turpin. So, the hoothoot was gradually trained to provide the couple the chance to travel without the threat of being attacked by any wild species. Turpin was delighted at his ever-growing strength and was soon tutored ominous wind – a gift from the couple’s friends for their fifth anniversary. Along with this TM, the couple were also gifted a pair of mating birds – a male staraptor and a female swellow, named Ben and Lucy. Following their arrival, Turpin soon evolved into a noctowl and was being used for more and more battles by the husband, the most enthusiastic of the pair. However, Ben and Lucy had also joined the battling team. Lucy and Turpin worked surprisingly well together, but his relationship with Ben was a far different story. They despised each other. Constantly fighting and competing for dominance in the team, Ben always accused the noctowl of trying to steal his mate and as a result, was particularly hostile towards him. As their fights became more and more intense, the couple was forced to retire the mating birds to be kept merely as pets, whilst Turpin held the title of their battle pokémon.

As time passed, the noctowl continued to strengthen, allowing the couple to travel all across the region and eventually settle in the city of Fortree with their three bird pokémon. However, shortly after settling in, Lucy laid an egg. The whole family were overjoyed at the news and whilst Ben despised Turpin, Lucy was insistent that Turpin act as her child’s godfather; he was delighted at the offer and quickly accepted. Only a few days later, Johanna the taillow was born. Turpin spent a great deal of time with the child and unlike her parents, he was able to teach her how to fight and fend for herself; which she was exceedingly grateful of. The two were very close to Ben’s disgust, and by the time the epidemic broke out, Johanna considered Turpin more of a father than the staraptor.

A month into the epidemic, the family home was suddenly attacked by a pack of infected mightyena. The young couple were quickly murdered; their bodies torn to shreds as the remains lay in one another’s arms. The young taillow found herself cornered by a pair of poochyena and whilst her parents looked on fearfully from the collapsed roof, Turpin swooped down to grasp the bird in his talons. Carrying Johanna out of harm’s way, Turpin was separated from Lucy and Ben in the panic of the situation and was forced to start a new life with his goddaughter.

They travelled together for a couple of months fairly blissfully, but when Johanna evolved into a swallow as beautiful as her mother, complications began to arise. In her new form, Turpin found himself more attracted to her as a mate and became increasingly manipulative in his attempts to win her affections. Terrified of the shift in the noctowl, Johanna constantly considered fleeing, but knew that despite her best efforts, Turpin was far too strong to stun for long, so reluctantly remained with him. After a few weeks, the pair crossed paths with Ben. Following the death of Lucy to an infected, Ben’s only reason for living was to be reunited with his daughter – however, upon hearing her treatment at the hands of Turpin, Ben was sent into a state of uncontrollable fury. The noctowl and staraptor battled savagely for almost an hour, both of them littered with bloody gashes before Johanna assisted her father in restraining the noctowl. With the foe temporarily paralyzed, Ben quickly slit the noctowl’s throat – however, was fortunate enough to avoid damaging the windpipe. Turpin bled profusely from the wound, slowly dying as the father and daughter made their escape without a second glance. However, when Turpin’s blood drained fully and his heart stopped beating, he soon awoke with deep, red eyes. Unbeknownst to him, Johanna had been supplying him with the meat of deceased infected and had contracted the virus about a week before he ‘died’. Pleased with his newfound stamina and durability, Turpin embraced the transformation and took off into the sky with a deafening screech.

User Note;
- Turpin is a very unpleasant creature. Unlike most infected, Turpin’s main concern isn’t simply feeding himself, but torturing the living. He will often leave them on the edge of death rather than actually kill them, only eating when his body demands it.
- Turpin’s behaviour changes around female pokémon and young pokémon. Concerning females, the noctowl will often stalk them for up to a week before finally making his attack – extending the killing process and rarely damaging the victim’s face, as if to preserve their beauty.
- For young pokémon, Turpin often swoops down to grasp the pokémon in his talons before retreating to a distance where he can still observe the creature’s parents or companions. He watches with glee the realization that the child is missing and eventually how the survivors drive themselves sick with fear over the youth’s whereabouts – he makes sure his still-living victim watches the scene. When his victim becomes fidgety, Turpin will hover in the air and simply drop the child from a great height, before launching his attack on the parents/companions.
- He’s fairly old and if he were a human he’d probably be entering his early fifties. This means he’s slightly weaker than a younger noctowl even with the benefits from the virus, however, Turpin’s greatest skills have always been speed and his flying manoeuvres.

:O Sweeney Todd!
Oh my god I love you for this.
Mewtwo

Thanks for the comments. Sweeney Todd is a bit amazing c:

Aww thank you. If it's okay can I just use a normal noctowl image for the time being? I'm eager to start roleplaying him c:

Sorry, Turpin's an undead pokemon. Could he be moved to the Undead Profiles please? c: The living image is only temporary until I can get an edit.
Mewtwo

Sorry about that, I have no idea who moved your profile. I was going to wait for your reply before I did that. But you are in Living Dead now at least you are on the team. Update the picture on this profile when it is ready and be sure to post on the Team Character Sheet with the new picture as well so the list can be updated.
_________________