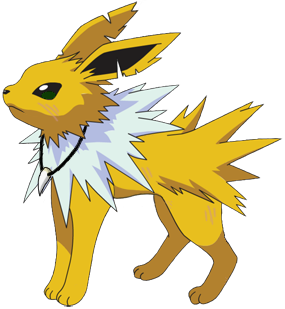 Thanks to LostCall for image!

Name- Thorn
Gender- Female
Level- 35
Moves-
Double Kick
Thundershock
Signal Beam (Taught by men at Battle Frontier)
Volt Switch (TM)
Ability- Volt Absorb
Nature- Serious
Characteristics- Alert to Sounds
National Dex No./Species-
135, Jolteon, The Lightning Pokémon.
Height- 2’02”
Weight- 40 lbs
Pokédex Entry- If agitated, it uses electricity to straighten out its fur and launch it in small bunches.
Item- Razor Fang
History -
Thorn was raised by a Pokémon collector in Cerulean City. She was paraded about by her owner due to Eevee’s rarity. It didn’t take her long to grow sick of this babying and escape through an open window into the city itself, and that was where she grew up for real. Thorn loved city life – the constant buzz and hum of activity, the people and Pokémon who entered and left like the tide. Despite this, she never settled down with anyone. The Eevee was a loner who moved around the city as it pleased her. She scrapped with other Pokémon occasionally, but only for sport. She’d rarely need to draw blood but when she did, she made sure to finish the job.
Eventually she grew tired of the limited form of an Eevee, and broke into the Department Store to steal a Thunderstone. The humans and security Pokémon who tried to catch her were too slow for the suddenly-increased speed of a Jolteon. She ran like the wind and kept running for years…traveling all over Kanto and battling along the way. Occasionally she'd hop a boat to other regions to take in what they had to offer, but it was rare that she'd stay. There were a few exceptions, of course. There were some nice men on what the people in Johto called "The Battle Frontier"...a Trainer in Unova who seemed sincere in his love for her...a Zigzagoon whose perkiness and constant optimism were overshadowed by her free Berries. But she'd always run. Thunder crackled through her veins, and she couldn't keep still for long.
Then the infection hit.
Thorn hopped on one of the last remaining ferries to Hoenn and started roaming across this new land, fighting off any infected who tried to cross her. Although she occasionally banded with other Pokémon for necessity’s sake, she never stayed with them for long. Love? Never. Friendship? Unlikely. She was perfectly happy being alone and intended to stay that way.
But perhaps that’s about to change…

-Thorn is prickly, and would prefer to stay alone
-She can be pretty smooth if she wants to be, though, and can be genuinely kind to those weaker than her. She just won't be. ;D
-Thorn is wowed by new places and scenery. It's one of the few things that really affects her.

You might wanna specify how she got to learn her moves. Jolteon needs Battle Points in order to learn Signal Beam, and needs a tm for volt switch. :3

Alright, I'll tweak the story a little bit. I'd ask for a commission, but I don't have a Paypal account and I have zero forum points. So it'll take me a while to work up to it. Thanks, though! ^^;
Suicune

Image edits, which are official pokemon art that is tweaked, is provided for free.
Custom paintings, however, are commissioned, so you can still get an edit without having to buy it. ^^
_________________

Oooh, you said the magic word! I'm going to go attempt to get an image edit then. Thanks for the heads up!

EDIT: I have a new image now. Can I start playing soon?
Lugia

Thanks so much. I'm looking forward to getting started!
Sponsored content