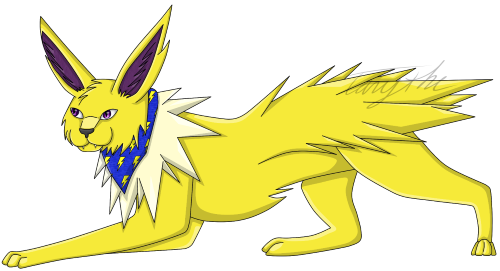 Characteristics
Proud of its Power

Pokedex Entry
Every hair on its body starts to stand sharply on end if it becomes charged with electricity. X

Personality
Sparkster's greatest strength is traveling all over the world meeting new faces, but as a nomad he tends to do things his way. Was released to the wild before his trainer passed. Most noteworthy feature is that he attacks from a distance giving him an edge in battle.

Appearance
A Jolteon with a bandana on his neck. He doesn't like it when people touch it or other pokemon try to steal it.

History
Sparkster began his adventure Twenty Four years ago. He was caught in the wild and quickly became friends with a trainer that was travelling through the Kalos region. As young has he was the Eevee was given a bandana and since then he's worn it everywhere he went. Time went on and Sparkster has been to every region except for Orre. Then one day the Eevee and his trainer came across a thunder stone The Eevee looked at it and with a big smile he watched as his trainer put the thunder stone into his pocket for safe keeping. The trainer would one day see use for the thunder stone and Sparkster would accept it.

Years later the trainer decided it was time to give Sparkster the thunder stone and as the Eevee stared right into it he could tell he was about to live up to his name. A blinding light surrounds the Eevee and when the light faded the Eevee had became a Jolteon. As the Jolteon started to learn electric type moves he began to fight with a ranged approach. The only time Sparkster had to go physical contact was if there was a ground type or a rock type. His Double Kick is no joke. Sparkster puts force into the kicks and when the opponent is down he sends a thunderbolt adding to the damage already done.

Then a year passed on and the trainer had only a few short days left to live. He released Sparkster telling him that he can no longer take care of him. The Jolteon understood his trainer, but after he told him to continue his legacy and see the world. The Jolteon waited for the trainer to take the bandana off him. To his surprise instead of the trainer taking it, he let him keep the bandana as a way to remember him. The Jolteon left the dying trainer and started venturing the world not only to broaden his horizons, but to become a nomad. He avoided capture by other trainers and always stayed away from civilization.

Everything was going good for Sparkster until the day the outbreak happened. He walked into an abandoned town trying to find some food to take with him. Just as he walked into a pokemart the undead happened to be feasting on an unfortunate human. Sparkster ran out of the pokemart as fast as he could and when he turned to leave the same way he came the undead was pouring out of ruined houses. His original exit was blocked off, but as he turned around he ran right towards the other exit and in the nick of time. A tree fell behind him blocking the undead from pursuing him. Since then he's been traveling during the day and finding safety by night. This was the beginning of Sparkster's nightmare.

User Notes
-A nomad and never stays in the same place for to long.
-The bandana around his neck was a gift from his trainer.
-A ranged attacker, but only attacks physically if necessary.
-Doesn't like anyone touching his bandana.

To the Main PC please
Victini