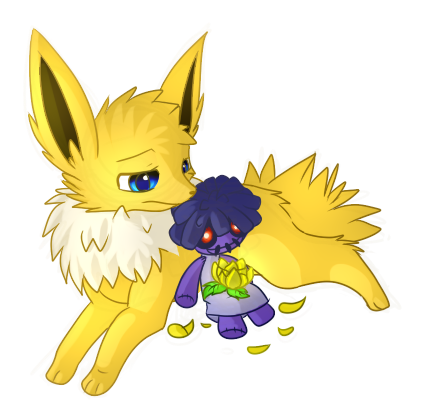 Pokédex Entry::
Yellow:: A sensitive Pokémon that easily becomes sad or angry. Every time its mood changes, it charges power.
FireRed:: If it is angered or startled, the fur all over its body bristles like sharp needles that pierce foes.


Item::
A creepy-ass doll (actual screenshot from the game) and a light yellow plastic rose.

Mary was born to a gentle Glaceon and a fierce Beartic in a litter of two, with her sister Isabelle, all under the same trainer. Even before the young Eevee had weaned off of her mother's milk, she had caught the eye of a man who immediately wanted her due to her different eye colour [bright blue] and the fact that she was a female Eevee, which was rare in itself. Although the owner of Mary and Isabelle's parents was reluctant at first, the blue-eyed Eevee was given away as soon as she was old enough to survive without her mother. The last she saw of her family was her sister, safely curled in their mother's warm fur while Mary was taken away.

The trainer wasn't nice like Mary first thought he would be. The trainer wanted Mary to be strong, to be the best... but being so young, the Eevee couldn't keep up. She was fed a couple of rare candies in the very beginning to give her level a small boost, but after that, the trainer trained Mary continuously to try to make her strong, as if practically wanting to make her into a weapon. She was exposed to a Thunderstone even though she wasn't ready, forcing her evolution into a Jolteon.

Scared, helpless, lonely, hungry, and thirsty, she fell and hurt herself, putting her body past the limit...

More often than not, Mary would collapse and faint instead of winning the battle, since her opponents were usually stronger. After these events, Mary would often be locked up inside of a crate without food for a day and a night. It only contributed to make her weaker, and her punishments increase. Her only friend was an old, ragged doll that the trainer threw away and Mary had kept. Though it was hideous and ugly, to the Jolteon, it was her sole, tiny escape from hell.

The Lightning pokémon didn't want any more of the abuse. She wanted to run away; and once, she did. Mary snuck away from her abusive trainer while on vacation to Unova, wandering into the Art Museum. There, she tasted a little bit of freedom for the first time since she was adopted, and had a first glance at what 'art' was. Though she did not understand the concept of it, she thought the pictures on the walls were pretty, as if they reached out to her. A kind man dressed up as a clown handed the young Jolteon a yellow rose; though it was plastic and non-living, she personally thought it was beautiful by itself and treasured it.

Eventually, however, the abusive trainer found Mary and took her back, much to her dismay. Mary was punished harshly for her brief escape, and her training only became more strict and hard on her body and mind. Still, through her torture, she kept the doll and the rose close by her self.

The Epidemic came, and the trainer pushed Mary harder than ever, attempting to pit her against the pokémon around Route 48, near the Safari Zone Gates right before the Infection reached that particular area. The Jolteon had had enough. She refused to fight and took her beatings in silence, not even complaining nor whining like she used to when she didn't receive her food. The trainer, in disgust, stopped trying to level up the Jolteon and went inside the Safari Zone, probably hoping for another pokémon to catch and raise instead.

I want you to have fun.

The trainer was attacked by a pair of hungry Fearows, the Undead quickly beginning to peck holes in his skin, his face, his eyes. Lashing out in pain, he threw out Mary's pokéball and ordered her to attack, to save he who was her 'rightful master'.

Come to a fun world without any adults.

Mary refused to listen and ran away with the doll and rose in her jaws, into the forests of Safari Zone, hiding and running away where appropriate since she was too weak to deal with most of the pokémon in the area. There, she scraped together her will to survive, with her doll and her rose. Remembering the once upon a time memory of a shiny Eevee with red eyes, she ventured around the Safari Zone and its surrounding areas, keeping a lookout for her long-separated sister.

We'll be together. You, me, and our friends.

"Jolteon is a dog-like Pokémon with a very short tail, surrounded by a fringe of spikes on its rear. It has four slender legs, each with a three-toed foot and a pink paw pad. It has large, pointed ears with black insides. Jolteon is covered in yellow fur, and has a white, spiky collar. It can make its fur sharp like needles; this is similar to Glaceon, which also has fur that can be made sharp. Jolteon has dark, fox-like, black eyes." -- Jolteon Entry, Bulbapedia

Mary is a very small Jolteon, even for her age. Her most distinguishing feature are her eyes, which are a bright, bold blue instead of the usual dark hues. Her skin is riddled with small scars from overwork and abuse, although her spiky, somewhat messy fur covers it. She walks carefully, as if a wrong step could make her crack like a porcelain mannequin, but can be fast on her feet when she chooses to. She carries around the disturbing doll wherever she goes, along with the yellow rose she found. They are her treasures, and she will bristle and attack without hesitation if they are taken from her.

After being with such an abusive and socially neglective trainer, Mary grew up to be a very lonely and somewhat clingy pokémon. She is normally very quiet, unless around her sister, Ib. Mary is antisocial and quiet to everyone except her own sister. Not knowing how to cope with things other than with sheer force and power as that was what she had been taught, Mary tends to become extremely violent when upset or ignored.

She hangs onto her rose and doll as if they were her literal lifelines, and will not hesitate to attack if either are threatened. She has a firm belief that her doll is indeed 'cute', and sometimes talks to it as if it were real though she knows it'll never respond. Mary is, and acts like a small child, not minding throwing herself in a world of pretend, and can get excitable over simple things like favourite colours.

Though she is quiet and practically unresponsive when alone, her personality takes a big 180 turn when she is around her sister, Ib. She happily sticks close to her sister by birth though they missed most of their childhood together, and only talks a lot around her. With Garry, however, she is more reluctant and hostile, as he is close to Ib and Mary envies their relationship.

User Notes::
>Somewhat based off of Mary [the blonde girl], a character from the rpg-style horror/puzzle game, Ib.
>Ib and Garry's dual profile can be found here.
>Sibling of Ib.
>She is naturally underweight and small-sized due to malnutrition and bad treatment, but also because she is young and not a full-sized Jolteon yet.
>Level is high and her moveset is mostly powerful TMs due to her abusive owner/trainer and his harsh treatment.
>Yellow roses are known to represent happiness and friendship, but also represented jealousy in the Victorian era.

Mary's profile is ready to be looked over. ovo
Mewtwo

While the history works for her level being slightly increased and knowing all TM moves, please keep in mind that even though the moves themselves are some of the most powerful in the game her stats would still be too low to be very effective with them. She wouldn't be able to say, take out a Braviary with one Thunderbolt. That is my only note and it is more for RP than the profile.