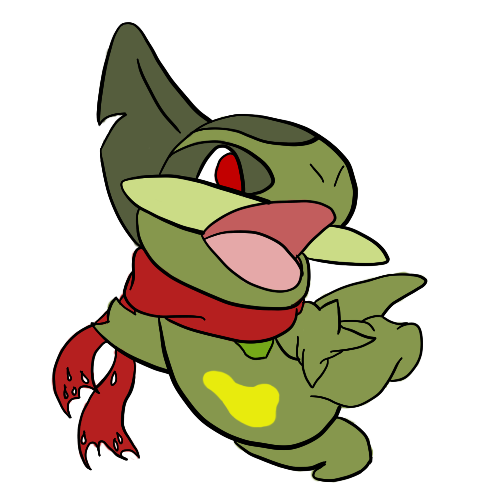 History- Zandros was born to a kindly female trainer named Rika, who had begged the local Dragon Trainers of Unova to breed her a special dragon. They pooled the resources and Pokemon they had available and came up with a Garchomp (which had been born naturally) and a Haxorus (which had ben born from a Salamence and Dragonite union). When the egg hatched, Rika received something that was rarely seen in most Pokemon: a birthmark in the shape of a small, yellow spot on his belly. Regardless of the fact that it made him different, Rika loved him anyway. They played every day, trained regularly, and formed a deep, meaningful friendship. They roamed the wilds of Unova for some time before news of a great contest in Johto reached Rika's ears. Along with a small team consisting of a Tediursa, Starly and Scyther, the group had made their way to the ferry and gone to Johto to compete.

The contest turned out to be a scam from a group secretly hunting weak Pokemon. They had already stolen a large number of innocent Pokemon from Trainers far less capable of fighting back; despite this, Rika put up her best fight, and after getting help from a passing-by policewoman and her partner, managed to beat down the gang and take back the stolen Pokemen. The gang members were rounded up and placed in prison for their crimes. Rika was then recommended to take on the Pokemon Contest circuit and the Gyms. While she did find that the contests weren't for her, Rika found that the Gym battles were right up her alley.

As the small team continued to compete in the Gym battles, Zandros wondered why, despite his heavy use, he was still not evolving. They had an easy run the first few gyms, and with a little team building along the way, managed to take on the rest with minimal effort. Rika was being considered a Battle Prodigy, and Zandros was picking up on strategies by watching her. Within a matter of months, they were ready to take on the League.However, just as Rika was making her way through Victory Road, the epidemic struck. As they rounded a corner, Rika and Zandros found their first sign of serious trouble in the form of a large, disturbingly evil-looking Houndoom that had been left behind and infected. As the beast lunged, Zandros dove in front of Rika, which caused a small ship to be torn from his had fin by the beast's fangs.

After a rough battle, Zandros defied Rika's orders to run to safety and chose to charge instead; he slid under the larger Pokemon's legs and sliced its belly with his tusks. This caused a rather gory mess which made the creature stop moving long enough to Zandros to climb up and give it a good blast of Dragon Rage to the base of the neck, taking the creature's head clean off and stopping it for good. Rika stared at him in shock, unable to understand why he would do that. As Zandros approached her, she turned and ran, fearing for her life, which confused the small dragon; he'd never done anything to hurt her before, and had just saved her life... why was she running from him?

He tried to follow her back into a town, but ducked for cover and watched her get picked up and torn to pieces by a vicious, zombified Skarmory. He knew if he tried fighting with almost nothing left in his tank, especially against something that was easily three times faster than he was, the only result would be him going to meet her... wherever she had gone. After the steely bird left, Zandros came out of hiding and searched for anything of hers that he could take for a keepsake. The only part of her left that he could find  was the red scarf she always wore, and after a lengthy time spent in a small cave mourning the loss of his dearest friend, he tied the scarf around his neck and looked for the Pokeballs of his fellow team mates. Finding only one, and being unsure of who was in it, Zandros set out to find a town where he could drop it off.

Upon reaching the Pokemon Centre outside Victory Road, Zandros entered and promptly collapsed to the dismay of a worried Nurse, who picked him up and started healing him. Noticing the Pokeball in his paw, she took it and set it on the stop-and-go healing station. However, disaster was about to strike again. When Zandros woke up, he found the building in shambles; blood was all over the building, blade marks were all over the floor... He looked fearfully towards the door, where Rika's Scyther stood, bleeding from several wounds and looking positively FERAL, with patches of its carapace flaking off and blood-red eyes. After a short round of battle, Zandros managed to once again stop the wild creature from killing him by using a pair of Dual Chop attacks to remove the thing's arms and legs and finishing it off with a burst of Dragon Rage to the head. Now once again totally alone, Zandros climbed back onto the healing table and went for a quick nap. As soon as he awoke, Zandros left the Centre and wandered into the route nearby, where he secluded himself in a small tree to stay safe.

After two months of living alone and foraging for food, Zandros left his hiding place to look for other survivors; this led to his being attacked, where he found out he was able to remove the blade nubs at the edges of his mouth to use as weapons. Though it took him quite some time, he managed to stun the larger Ursaring enough to run for his life. To this date, he’s managed to stay alive, developing guerilla-style hit-and-run skills to keep foes away while maintaining his own life. He trains several hours a day to increase his strength and endurance. He refuses to take life unless absolutely required, as he hated having to do it the only two times he allowed himself to do so.
25. Appearance- Zandros has slightly angry-looking eyes, but the reason for this is due to fatigue from training and running, combined with an inability to sleep at night for fear he won’t wake the next day. Zandros has a small, triangular chip in the sail fin on top of his head, a yellow, mustard-stain birthmark on his belly, and wears his deceased Trainer’s red muffler around his neck.
26. Personality- Before the epidemic hit, Zandros was an upbeat, wacky and unpredictable little Axew, who had a thing for grand entrances in Pokemon battles and performing attacks with a flourish. After being separated from his trainer and living two months on his own, he has become paranoid and tactical in how he handles threats, though as he has not seen any survivors, he doesn't know how to handle a gathering of normal Pokemon. Due to his isolation, he has been away from other Pokemon long enough to have forgotten how to socialize with others properly; as such, his best attempts at social conversation ends up becoming a serious lecture on proper techniques to avoid the zombies. Due to his hit-and-run tactics, he has learned to sleep with his eyes open and never for too long at a time, so that he always has enough energy to make it from one hiding place to another and rest a little more, making himself always ready to fight if need be, and always wary. He likes reminiscing about his past, and loathes the undead with a passion. He has a soft spot for training those who can't fight, and takes pride in being able to make those who can't defend themselves able to do just that. His greatest desire is to find out what happened to the remaining Pokemon from Rika's team, and fears one day becoming what he seeks to steer clear of. His only other wish is for the epidemic to die away and allow humans and pokemon to exist happily together once again. He cares nothing for how it started, and simply wishes for it to end peacefully so he can settle down and finally relax.
User Notes- Character image from NightmaresEmber.

The species section needs to have dex number/name/classification; you appear to have done it as dex number/type/name.

I'd like his scarf to be included in his 'items' even if it has no practical use. It still counts as something your character has on him.

I'd like to learn more about his background; a rich history helps mold a more believable character. I personally would like to learn more about his time with his trainer on their journey. Which region did they travel? Did they take on the gyms? Did his trainer have any more Pokemon on his team? What achievements and difficulties did they have on their quest? With this in mind, try and expand a little more on his personality as well - does he have any peculiar habits or quirks? Likes or dislikes? Desires and fears? The user note about his social anxiety could go in the personality as well.

Is the yellow spot on his belly a birthmark? If it is I'd like it mentioned.

All fixed up, he should be ready now. ^^ If there's anything further you can think of, I'm happy to add it in. ^^
Victini

My only big note is that Cynthia, being a major NPC on this site, cannot be used in the history in such a way without permission. Also, 'Dragon Master'? As far as I know she only has the one dragon, lol - not sure where that Haxorus came from. ^^;

Ready for you when you're able. ^^ If there's anything more, just let me know; I'm fairly certain I've cleaned up all the spelling/grammar issues and fixed the part with Cynthia. ^^
Victini