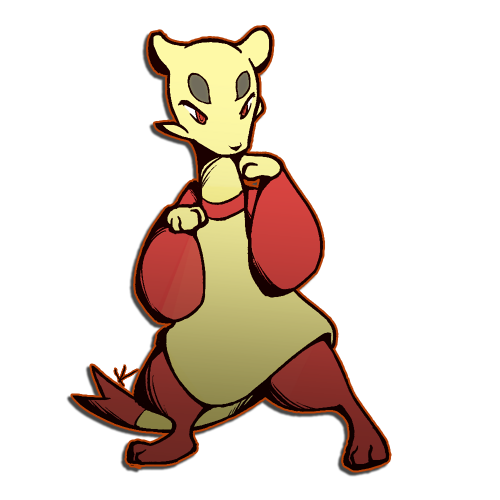 Mienfoo is a Fighting-type pokémon.
It evolves into Mienshao starting at level 50.

Danzi is currently uninfected and a single character/travelling alone.


Appearance
"Mienfoo is a yellow, bipedal, mustelid-like Pokémon, with round ears, red eyes, round black ‘eyebrows,’ and pink nose with a whisker on each side. Its red arms look similar to flared sleeves, and the paws are yellow. Mienfoo’s chest has a small red band, and its pelt piles around its thighs resembling a tunic or robe. Its legs are red, and its yellow tail is also tipped red. It is a very skillful attacker."
-- Mienfoo, Bulbapedia Entry
Danzi is, by appearances, your average mienfoo, with the typical height, weight, and looks. She has no particularly notable scars, the main marring of her apperance being build-up of blood, mud and dirt from travel. She does mind the dirt, but for lack of definitely uninfected water, the filth often tends to pile up. Whenever she does have access to clean water not for drinking, however, she does try to wash up and keep herself looking presentable.

Attitude-wise, her standoffish attitude can be shown in her high-held head and straight back, in her attempts to make herself look as least vulnerable as she possibly can. Having grown up trying to prove herself equal to her male teammates, she has a stance that's very boyish, and an attitude to match. Her eyes are constantly sharp and aware, made even more so by necessity of the outbreak. Her eyes also have slight bags under them for lack of sleep, again due to the outbreak, but the irises remain constantly wary and closed. Being so constantly stiff and focused on toughness, she holds herself very rigidly, which occasionally leads to muscle pains down the road.


Personality
Stubborn | Standoffish | Boyish | Determined
At a first glance, Danzi has a bit of a unsociable look to her, with her consistent slight scowl and now-darkened eyes -- and her initial personality tends to reflect that, often being wary and curt to those she meets. Being in the epidemic and under consistent stress has taught her to distrust strangers, due to the increasing number of malevolents or those who had gone insane.

In general, her personality is very standoffish, consistently keeping up a tough appearance and attitude to let herself not be seen as potentially 'weak'. She is very sensitive to comments about her strength relating to her gender, and she consistently tries to play it up as 'boyish'ly as she can. Danzi has a tendency to react very negatively to any gender-related remarks, and is very focused on strength, power, and on proving herself for who she is. Due to that trait, she can occasionally get in a little too far over her head trying to affirm her strength, and is currently working on keeping her cool in stressful situations and in retaliation to mocks and teasing.


History
An object for trade -- that's what she was birthed for. She never saw her mother nor father, having hatched from her egg in the confines of her trainer's backpack, far away from the daycare where her egg was birthed. She stayed with the trainer for a little while -- "Annie" had been her given name during her short stay of about a week, and given a safely wrapped razor fang to hold. Then, the next time she stumbled out of her pokéball, it was from the hands of an entirely new trainer and an entirely new team.

Her new teammates had been all boys. They often teased the new, young, "baby girl" mienfoo, prodding her for her skinny look, her soft baby fur. They weren't necessarily a bad group -- they sat around her and consoled her when she cried for her old trainer, holding on tightly to her given razor fang. They helped her when she ended up accidentally cutting herself on the fang, and consoled her again when her new trainer took the item away. But as she grew, there was an evident gap -- she was not only traded, but also the first female to be on this new trainer's team, so she was an 'outsider', no matter how much her teammates tried to insist she was still a part of the team. It didn't matter if the strength gap was originally there because she was at a lower level and younger than everybody else -- to the young mienfoo, it was because "[she] was a girl".

So of course she trained hard. To prove herself, she reached certain levels of strength faster than her teammates had at her age, working hard under her new given name of "Danzi". She never forgot her old name, though she'd forgotten the face of her first trainer, now being filled with ambition and determination to become strong instead. Weaknesses became unforgivable to her, and after her first critical hit, two-hit KO loss, she was crushed for a long time before she was able to rebound. Nonetheless, she quickly became one of her trainer's go-to pokémon for battle, beating trainer after trainer on the roads, her trainer's utmost goal being to scale the Black Tower...

At least, until the epidemic hit. At first, the changes were slow, before the infection took a firm hold and spread rapidly. They were able to fend it off quite well by themselves, at first; with all the training Danzi had done, and with her teammates, they were fairly formidable. Of course, though, as the epidemic progressed, that luck didn't stay. She saw two of her teammates die at the claws of some depraved beast, hardly pokémon anymore -- one of them crippled, the others otherwise injured repeatedly. Everyone was gradually getting more and more exhausted with the increasing undead and dwindling supplies.

Then, one day, she found herself suddenly sprawled on the roadside, blinking at an almost mockingly bright sun. She never found out what exactly happened to her trainer -- she had been in her pokéball, and the next thing she knew, she was out, and the pokéball crushed underfoot by some heavy pokémon that had clearly been running past. Her trainer? Gone. Her teammates? All missing. She had found herself on some roadside, near a few bushes in the middle of Johto with nobody.

Well, what else was she going to do? Naturally, she picked herself off of the road and began a journey on her own -- maybe she would find her trainer and teammates, maybe she wouldn't. This time, she was on her own -- now, she had to use her strength not to prove herself to someone else, but to survive...

SHE'S READY Danzi the mienfoo is ready to be looked over for approval.
Mew