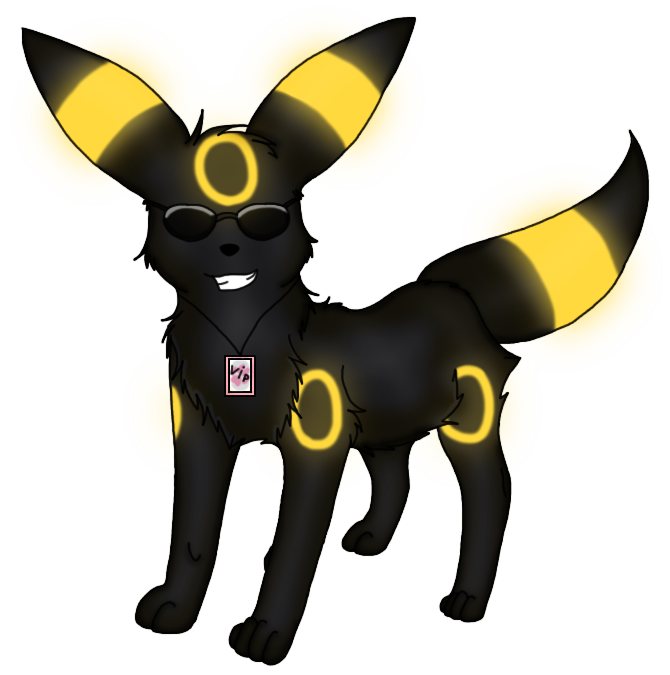 History- Felix. Yes, that was a good name. A mother Sylveon and father Flareon decided that, that was a perfect name for their infant. A bright eyed little Eevee had been born to them and was a welcomed addition to the small clan living in Kalos.
Vaniville Pathway was about as perfect a place to raise a child. The warm sun beamed down on the grassy lane and shade trees stood as a cool retreat from the heat of the day. Young Felix spent his time happily; he would play chase with the other kids, explore and even roll down the hills. Life was great.

Summer was nearly over when a mother Glaceon and her child approached the clan leader, knowing winter was approaching, she asked if she and her kit could join the clan if only for the cold months coming. Of course they were not turned away and Felix was curious about the new faces. Giving them time to settle in, he was determined he would meet them tomorrow.
The night came and went and after what seemed like way too long, Felix was looking for the new kit. After checking quite odd places such as random bushes and tree limbs, he found three of the clan's youngsters and the new kid underneath one of the grandest trees on Route 1.

Felix trotted up to the group of Eevees, questioning why they were being so mean and why the new kit looked so upset. "She's a freak!"
The trio dashed away, leaving Felix and the female in awkward silence. She buried her chin in her fluffy fur and looked away. "Does your entire clan hate girls?" she asked. Felix shook his head, "I don't. My name is Felix, what's yours?" "Tali."

Felix and Tali spent nearly all of their waking time together. They preferred each other's company over anyone else and grew exceptionally close. One kit dared make fun of Tali and received a Sand-Attack right in the eyes from Felix as a warning.

A night as they bordered young adults, the foxes laid in the grass gazing at the starry sky. Felix's heart pounded against his chest as he looked over at Tali lit dimly by the blue moon. "I, uh..." he whispered, unable to find his words. Tali looked at him curiously, "What?" Felix sat up, turning his back to the female.

"I love you." He couldn't believe he was actually saying it. After all those years of having a little crush that evolved like a Pokémon, he finally admitted it. Felix looked back, expecting the female to look shocked, disappointed. To his own surprise, Tali's lips met his and time seemed to stop for the duo sharing their first kiss. Ivory white light shone from Felix and his form changed. He grew taller, slicker. The light faded and appeared a black canid with striking red eyes and yellow rings.

"Huh? A Leafeon?" Felix tilted his head at the female Eevee. "Yes!" Tali confirmed, "I want to become a Leafeon!" Tali wanted to evolve and Felix couldn't deny her that nor let her go alone. They promised their clan they'd return and their journey to Route 20 began that day.
It took a several days and a lot of walking before they finally reached Moss Rock right at nightfall, deciding to rest for the night, they curled up together near the stone and drifted to sleep.

Vicious howls and snarling awoke the couple. Both bolting to their feet with hackles raised, they watched in alarm as a hellhound shot from the shrubbery towards them. They defended against the Houndoom as white hot flames were launched and black pulses of energy flew. The foxes took far more hits than they dealt and were battered within the first ten minutes. Tali threw herself at the Houndoom with a Tackle expecting to do at least a little damage, but it swiftly avoided her and clasped it's fangs around her neck. A quick Bite sent her limp and Felix let out a horrified scream.

The Houndoom, satisfied with it's catch, turned and disappeared into the trees with Felix trying to trail behind with a bruised and burned body. He kept up until exhaustion finally set in and he collapsed. "Ta... li..."

He wasn't sure how long he was unconscious. Or why he was unconscious, really. All he knew was he was trapped inside a container and it was like nothing he knew of. Which wasn't much, because for some reason, he couldn't remember anything except the face of an Eevee and he felt like he knew her somehow. His Poké Ball broke open and he was released into a small living room. "Hi!" greeted a teen girl, "Good to see you're awake~! My name is Kala."

The Umbreon paused for a moment. What was his name? He couldn't recall and it was troubling. The petite blonde girl, Kala, gave him Rawst and Oran Berries and the pain from his injuries began to ease. He didn't know how he got in that state, but he was glad for the help. "I think..." Kala rose a finger to her chin in thought. "I'll call you Kieran!" Kieran, huh? He didn't know what else he could be called and he frankly liked the sound of the name, so he accepted it.

Kieran and Kala arrived in Lumiose City a week later. Taking a cab through the giant city, they drove up to the PR Video Studio and stepped into the building. Kieran looked around in awe. People were everywhere shooting videos, doing makeup and looking through racks chock full of fancy clothes.
Kala and Kieran shot their first video and the duo were a hit in Lumiose. Together they became more and more well known until finally they were offered a gig in a movie.

They were nervous beyond belief but the director and other actors were encouraging and kind, helping them along the way. Soon enough, Kieran and Kala were at home on the couch with a bucket of popcorn waiting for their movie debut on TV in the horror, "Death After Dark".

Ratings were great and their fame soared. Finally, people were practically begging the duo for their auditions and Kieran and Kala had the life. They were supplied all the TMs they needed for movie parts and their acting had become brilliant.

Word of a so-called epidemic spread like wildfire. They shrugged it off and continued their work. Shooting a brand new movie, all was going pretty good until the epidemic reached Lumiose. Monsters invaded the outdoor shoot and began to mercilessly attack the crew. Kala ran to her trailer and ripped the door open, shouting for Kieran to follow her. He tried his best to avoid the monsters, but before he could reach his owner's trailer a group of them surrounded her door, clawing madly to get in. "Kieran!" Kala yelled. Kieran used a brand new move he learned for the movie, Double Team, and drew the monsters away.

When he returned, it was a bloody mess. But much to his relief, Kala was not among the dead. He picked up his items dropped during the madness; his VIP pass and Blackglasses, leaving behind the carnage, he was determined Kala was still out there. And who was the female Eevee in the back of his mind?

Appearance- Umbreon has a sleek black body with four slender legs and crimson eyes. There are two pairs of pointed teeth visible when its mouth is open, one in the upper jaw and one in the lower. It has long pointed ears and a bushy tail, each with a yellow band around them. Its forehead and legs have yellow rings on them. Its yellow markings glow at night and strike fear into anyone nearby.
Kieran has no significant markings or scars, the only thing setting him apart from the rest is his VIP pass worn around his neck and his Blackglasses which he never takes off.

Personality- Conceited l Bubbly l Brave l Sassy l Hates getting dirty l Despises Undead l Loves humans l Confused l Bored
Kieran is an odd individual, his stuck-up personality showing most. He never misses a chance to gloat his fame around to others and generally is offended when no one knows his name. He’ll then start to preach about his various roles, giving dramatic reenactments and ask if they’ve seen Kala in very inconspicuous worry. Filth is his enemy and he’ll stop in the middle of awkward times to give himself a wash as he needs to remain clean since he has a name to uphold. If one can ignore his annoying mentioning of his fame and such, he’s very chatty and will strike up a conversation with nearly anyone with a smile. He’s outwardly happy but behind the facade, he’s still confused about why he can’t remember anything besides Tali’s face and he wonders if Kala left him on purpose. He shoves these things into the back of his mind and carries on like any good star would. In Kieran’s mind, Undead are disgusting abominations and though he hates getting his paws dirty, he won’t hesitate to kill one if need be. He prefers Special Attacks so he won’t risk infection but if left with no options, he’ll fight paw-to-paw. He can also get attached to survivors and if they’re threatened, he’ll fight bravely for their sake.