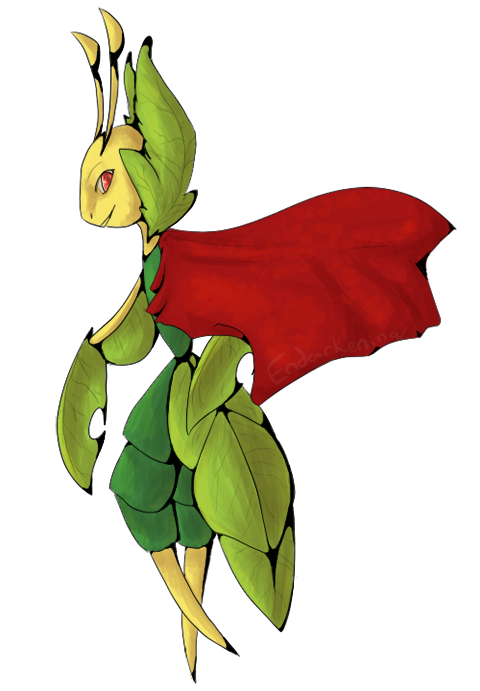 Pokédex Entry: Upon finding a small Pokémon, it weaves clothing for it from leaves, using the cutters on its arms and sticky silk. (Pokémon Black Pokedex)

History:
He was caught as a Sewaddle, one that was slightly shorter than the norm, and immediately he was drilled to fight and train hard. His trainer held no mercy for the weak, and the other Pokémon ridiculed the little bug Pokémon for his short stature. To add to that, once he was cast from the social elite, no one wished to help his lonesome. No one loves me. He said forlornly as he sat outside looking in, despite feeling a burst of love for the trainer who caught him and the Pokémon who grudgingly protected him.

He endured the harsh training, even go so far as to evolve into a Leavanny just to please his master. He trusted this man, whom had no heart where it would be. Every potion used to heal him in battle, every food pellet thrown at him, and every night spent in the Pokéball - the Leavanny was ever grateful for it. And he was as such, until a day came when the trainer lost his temper. "Useless! What a burden you are!" He yelled with pointed anger, breaking the Pokéball that connected the Leavanny to Master.

With large eyes that didn't understand the situation, he fled the scene, his master throwing rocks at him and yelling curses. No one wants me. That was the lesson he learned that day, the slashing words digging deep into the bug's heart. The Leavanny ran away, and across many lands, feeling lost at what to do. A night came when the Nurturing Pokémon fell asleep, and received what he liked to call a 'prophecy'. Within this dream, the Leavanny imagined himself with a red, flowing cape, using his blade-like arms with great precision to protect those around him. He noticed that those Pokémon adored him, loved him.

When he awoke, the Leavanny knew what to do; he gathered many red leaves, and after a full four days of work, had knitted a red cape that was extremely fine for being leaves. He named himself 'Prophet Blade', and he swore to always protect the young, the meek, and the helpless. I won't let the innocent be hurt if I can help it. The newly named Prophet Blade set out, and he did just that, telling everyone of his story and how he overcame adversity and realized that he was truly grand.

Appearance:
The first thing that catches one's eye when they happen upon this Leavanny is his red cape, and in actuality upon being felt it is rather crispy (due to being leaves). His posture usually insinuates the feeling of self-confidence and endless energy, constantly striking poses and jumping into action. Prophet Blade, in combat, prefers to do minimal damage to many foes at once, so as to wear them all down equally.

Personality:
Pro-B has Superman Complex: a disorder that arises from past traumatic events, which causes the person to see himself as invincible, considering that he overcame previous events. As such, he is not afraid to place himself in danger and risk his life for others, although he may be very 'loud' about his victories. He often exteeeeeends vowels in words in large bellows to emphasize his importance. He's not afraid to be in the front lines and do heroics, wants to take down the 'bad guys' and will most definitely not give up, determined to help his friends and family.

Despite being horrendously showy and loud, Prophet Blade means well, and is determined above all else to protect his friends. The Leavanny had sworn to never give up once he's set a goal until he's completed it. Until then, and only until then, will Prophet Blade call his work finished. World peace is a big goal to shoot for, however.

User Notes:
- Treasures his cape more than anything else
- Comically takes the lead often
- I GOT ME LEAVANNY BACK, BASIC BIIIIITCHES