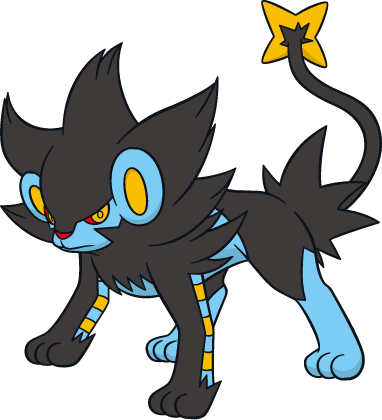 
Pokédex Entry It can see clearly through walls to track down its prey and seek its lost young. (Platinum)


Characteristic Proud of its power (+Attack)


History
Sparky was a happy child. There was nothing to give him reason not to be. Even when he was picked from his littermates by a trainer who gave him the name Sparky. The female was very uncreative when it came to naming her Pokemon. It was Sparky and a Chimchar named Inferno. Sparky was no good against Roark or Gardenia but when it came to Maylene, Sparky spanked her. He was already a Luxio and their newest teammates were a Zubat named Zeke and a Staravia named Tarvus. Tarvus and Zeke had lowered Maylene’s Pokemon’s Defense and Accuracy and Sparky went in for the kill. The female was proud of him and gave him a loving pat on the head before they departed for Pastoria City. Sparky owned that Gym pretty hard too except for the Quagsire. Those damn things became the bane of Sparky’s exsistence. He had to watch Tarvus now a Staraptor and Zeke now a Crobat take it down and leave the Floatzel for him. That bored Sparky… It wasn’t a challenge to him… Even after becoming a Sinnoh League Champion, Sparky was bored. The girl trainer brought all of them back to her home in the Johto region which Sparky only quirked an eyebrow to but nonetheless remained bored. Being a faithful Luxray however, Sparky kept to doing things that earned his trainer’s favor. One thing he did not like that his trainer introduced to him was breeding… Sparky hated the thought of having a mate. They were so intolerable and nagged his large ears off. They had one female on their team from the beginning which was a Buizel. She believed she was one of the guys though so in a way was tolerable. But the females presented to him were not.


A female Luxray and Persian… Both astonished by his large size and intimidated by the scowl he looked at them with. Sparky’s kits were to be sold in hopes of one of them taking his large size into their DNA and being valuable. His trainer would have none of that. The kits were to stay with Sparky. Sparky of course had no say in this and even if he did… What the hell would he say? I don’t want the little bastards take them away? By the end of the month, Sparky had more kids then anyone else in town. Each and every one of them was simply fascinated with him. Sparky couldn’t lay down or sit without them piling on top of him. Annoying little hairballs… That’s all they were… The kits also had to snuggle close to him at night for warmth. Sparky could only roll his eyes and allow it in fear of one of them complaining to his trainer. Over time, the kits grew on him and he became a caring, doting father. Each kit got separate attention and love from him and in their own way opened his heart. Sparky was content with protecting and loving his children and made a mental promise to himself to always protect them. And he did! Until the plague came many years later…


Sparky had thought where they were was safe from this Epidemic. He was wrong. By the end of the first week, his kits were gone. Stolen away by infected Wingull and Murkrow. Sparky growled and fried every bird that dared to come near him. He hated everything that flew living or not. All he saw when he looked at them was the mangled body of each and every one of his children. Sparky found his way to Johto’s Safari Zone and made it his mission to cleanse the entire area of the beasts that had torn everything away from him…


Appearance
Luxray's appearance is based on that of a fully-grown lion. It has three gold-colored rings on the backs of its legs, similar to Luxio (which has two) and Shinx (which has one) and has eyes with golden pupils and irises and red scleras. Luxray has a blue body partly covered with a spiky black mane from its head to its front legs and parts of its back legs. It has a long, thin black tail with a gold four-pointed star shape on the tip.

Spark is completely normal for a Luxray despite his size which is mostly from his age, level and upbringing


Personality
Luxray are extremely vicious and predatorial, although when tamed and trained correctly they can become very loyal and faithful, protecting their Trainer from danger. They tend to be stubborn and can administer extreme amounts of power through their electricity. Because of their flawless x-ray like vision, practically nothing can go unseen by their eyes. Abusing a Luxray can cause it to become antagonistic and vengeful towards their Trainer. Luxray need a lot of compassion and praise to maintain their satisfaction, as they are proud creatures. While generally independent, Luxray may band together in large groups and look out for one another in the wild.

Glad to see someone's bringing the team back! I'll just have to join you :3
Mewtwo