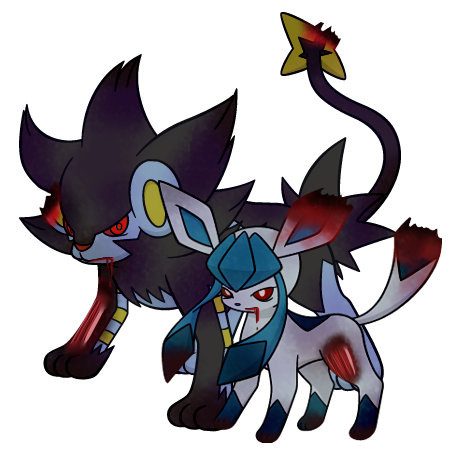 Pokédex Entry: "As a protective technique, it can completely freeze its fur to make its hairs stand like needles."(Diamond/Pearl Pokédex)

"By controlling its body heat, it can freeze the atmosphere around it to make a diamond-dust flurry."(Platinum Pokédex)

"When its eyes gleam gold, it can spot hiding prey--even those taking shelter behind a wall."(Pearl Pokédex)

Item-
No items are in his possession

Two figures are spotted in the distance under the strength of the snowstorm. Their bodies looked like their tangled to each other, but upon closer inspection, the Glaceon's and Luxray's mouths are filled with meat and blood. Meat and blood belonging to only themselves.

The duo looks similar to their original species, the difference being their coloration. Because of the virus did the coloration became duller, dull purple blotches of fur can be spotted on the each of them. Bite and scratch marks from each other can be spotted in many different places of their bodies from themselves, and themselves only. On Aurora's left hind leg, muscle and some part of the bone is shown, whereas Spectrum's right front leg is the same.

Personalities-
Like they have always, Aurora is still as bold as ever, and can only speak some parts of her mind -- due to the virus taking over most of her brain -- and taking action immediately. She's much more overprotective of Spectrum, but refers him more as food rather than a lover.
Whereas Spectrum, still overprotective, thinks of Aurora as a lover rather than food. He's not shy, but is very prideful and is easily intimidated by the same gender.

History-
Aurora and Spectrum were together since birth, not that they were siblings, but rather that their parents were close childhood friends with each other (rumor has it that Aurora's mother and Spectrum's father used to be lovers, but things got out of hand, and they ended up with different mates). Not that the young Eevee and Shinx minded, they got along quickly and stuck together like glue. It was just as if only their wold mattered. Spectrum was shy at first, but was overprotective of his Eevee friend (Alas! Young love!). On the other hand, Aurora was bold, never afraid to speak her mind and take actions as soon as possible. She was also protective of her Shinx friend, but didn't share his feelings until much later.

Time quickly passed for the duo, Spectrum was a Luxio a year after their meeting, whilst Aurora stayed the same form of an Eevee. It was questionable, as the twosome had always planned to evolve at the same time, their parents thought so too. It was due to Aurora's inner conflict of who to evolve into that prevented her from evolving (Well there are 7 choices, very picky she was). Spectrum respected that, supporting Aurora to the best of his abilities. Little did he know that trouble would come upon them soon.

On a quiet evening of their home in Acuity, when Aurora finally came up with her decision to evolve into a Joltleon, she was told to visit a cold stone to look for the Thunderstone that was buried in the snow. But she must do it alone. The Eevee accepted that, telling Spectrum that he must stay at home until she evolved. Little did she know, that the Luxio tailed her along the way. During her little journey, she came across a group of Female Luxios, thinking Aurora was a rival for Spectrum's love (Apparently, those Luxios also had the ability Rivalry). The Eevee was beaten right then and there to the point she couldn't stand, as she laid in the snow she wished and wished to be stronger, Spectrum came to the rescue, chasing off the group as he protected his friend.

As the Luxio faced his childhood friend, he was amazed by the new sight. She had evolved into a Glaceon, who was ready to fight anything that comes her way. Aurora's feelings for Spectrum began to blossom from there.

Months after the incident, the young Luxio was now a full-fledge Luxray, proud and strong. He spent many weeks after his evolution flirting with Aurora -- whom was not oblivious, but pretended to be. It was then after those many weeks had paid off, as the Glaceon accepted Spectrum as a mate.

The impossible happened soon after.

In their little society up in the mountains, Aurora came back from her journey to the human village nearby to scavenge for food... only to find out that her mate Spectrum, was with another female Luxray. They had eloped hours before the Glaceon's return. Envious, rage, and depression filled Aurora, her stomach churning. Spectrum on the other hand, as he ran out of the mountains with his new love by his side finally came to his senses as he remembered Aurora. It was because of the Luxray's Attract that he followed her. Spectrum feeling regret, ran back up the mountains, the other Luxray and her trainer following behind. It was because of Spectrum that he led the trainer into the little society. And it was because of that, it led to the trainer's death.

Aurora was disappointed in the Electric/Dark dual-type, but understood why he eloped with the other Luxray as she noticed the female flirt with others easily too, as she joined the little society, feeling nothing towards her trainer's death. Aurora and Spectrum got back together again, their little society back in peace.

Peace was too soon.

The Epidemic hit, Aurora was the first to get the taste of it as she was bitten by a member from the little society. They banished members that became cannibalistic, little by little did the society finally disbanded, running off in fear of getting eaten. Spectrum stayed by his mate, symptoms of her becoming undead did not show until months later. In those few months, he carried Aurora everywhere, away from harm. Spectrum was bitten by Aurora when she begged for meat 5 months into her infection. It was then that the duo began their lives as Undead.

As the Epidemic raged on, the duo began to lose their memories, but stayed together. They traveled to many places, eventually ending up in Hoenn, where they began to find prey to play around with.

> Infection Period: Aurora has been infected since the beginning of the Epidemic due to the bite on her ear. Spectrum has been infected after receiving Aurora's bite on the tail 5 months into her infection.
> They're lovers, despite being undead, they stick together and fight together, however, their memories of the past are a blur due to the virus. (They only remember that they were meant for each other)
> They can get easily jealous, thus if one is to get around one of them, the other lover immediately target that Pokemon until dead.
> Because they're lovers, they think that they must be a part of each other, thus they eat bits and pieces of each other. That way, each of them are inside of each other.

I am just out to troll all of these lovely teams with hoards of undead, aren't I? xD