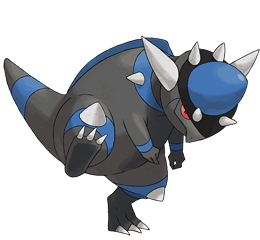 Height: 5'03"
Weight: 226.0lbs
Pokédex Entry: Its skull is as hard as iron. It is a brute that tears down jungle trees while catching prey. (Pearl Pokedex)

History:
Revived into a breeding facility that raised species that were close to extinction, the newborn Cranidos was cared for and placed in a well monitored 'natural' environment. The breeders had hoped that by placing Braxton into an area that would remind him of his life per-fossilization, it would help the ancient Pokemon to feel more at home, along with other Pokemon that were revived. They had hoped that they could replenish the species to the number they were once at, and hopefully one day allow them to live in the wilderness like any other Pokemon. The breeders had hoped that Braxton and the rest of his family line would fulfill their wishes and maybe even exceed their dreams.

But by placing Braxton within an environment that was much like his old territory, he fell back into primal ways, staking out his claim and driving out potential dangers (which was nearly anything that moved). His species were always a solitary group, keeping out of each others way and only coming together when the need called for it - and there never was a need for them to gather. The breeders' pampering only helped his physique, his strength nearly always at its peak when he need only turn to a human and a free meal would be served. The Cranidos would have stayed alone all his life, if it weren't for a female Shieldon that one day caught his eye. He was rummaging through the part of the forest in which he protected, seeking out a new mate hungrily (he had plenty), he had chanced upon a Shieldon that was resting peacefully deep into his territory.

At first Braxton was outraged, threatening to hurt her for invading his land. But with a calm voice that shocked the Cranidos, the Shieldon told him that she meant no harm; and asked in an equally calm voice what was the reason of holding such a large plot of the forest if it was only him. "It's called surviving. The weak get eaten, and strong get tougher. That's how it goes!" Braxton thought he was so cool back then for saying that, and it was only until much later that he realized how empty his words must have sounded. "What you hold dear today will only be a footstep of tomorrow," the Shieldon had replied, beginning to walk away. It was the first time someone had actually confronted him without using attacks... and beating him! Humiliation burning, he chased after her, finding himself talking more and more. Braxton never went back to his old territory again.

The Shieldon, whom had told him that she held no name, allowed him to come along with her, only if he promised to 'behave more justly'. Although thoroughly annoyed with her calm but controlling demeanor, he truly did fancy her for how gentle she was. The first week Braxton silently watched at his unnamed friend traveled from one group of Pokemon to another, checking to make sure they were all safe and comfortable. It wasn't long until he found himself dragged into her business, playing with the children while the Shieldon checked over the parents. Days came and went, and as the nights rolled on, he would always fondly remember when they would look up at the artificial stars, telling each other their lives before they were revived into the breeding facility. "If I could gaze upon the true stars of the night once more in my life... what a far-fetched dream..."

The time that he had spent with his beloved had grown on them both, the two of them evolving in their physical forms and in their love for one another. Braxton had become an easy going man, and though very protective of those he loved, many Pokemon enjoyed his company and goodwill.

But he wanted to please everyone; he saw the smiling faces of the children, the proud gazes of the parents, the peaceful lull in which the elders slept. Knowing that his love yearned for something so difficult to reach, Braxton vowed that he would find a way out of the breeding facility for both he and his Bastiodon. He trained for many days, focused entirely on fulfilling the dreams of his love. And when he deemed himself powerful enough... he struck the office of the facility, effectively crashing out of it and beginning his escape plan. Both he and his love ran around and about, but the breeders were beginning to take out the tranquilizers, and just as he found the exit and ran towards it-

He realized that the Bastiodon, the same one who brought the happiness and calm into his life when he himself never knew there was such a thing, wasn't with him. With a choked gasp, Braxton ran back to find that a tranquilizer had hit his beloved directly in the heart. Instead of putting her to sleep, it had put her to death. The tears flowing freely from his eyes, the heartbroken Rampardos fell into a frenzy, destroying the building in his blind sadness. Just as the building began to crumble, Braxton grabbed the still body of his love and heaved her away. It was nighttime when he got outside, but the twinkling stars that he had adored were only sole betrayers. That night, he lay in quiet weeping for his one true love, his wish to bring happiness to her bringing only death.

In the days that followed, Braxton became bitter, sour to a point, scaring away anyone who dared to approach him. Years passed by, and the fossil Pokemon had settled down. He had gotten over his heartbreak, though he could never bring himself to find a new mate. But by settling down, it really meant that Braxton held a small territory to himself, though he never defended it against any intruders. Braxton had gotten much older by then, being past his prime, but he's seen some gruesome things - he's done some gruesome things to others. Irritated that when young ones complained and even fretted about this 'epidemic' that raged the land, Braxton would tell them off that they had it easy! "You don't know how ravaged the earth is until you've experienced it all, brats!"

He's been that ever since.

Appearance:
Braxton resembles much like how any other Rampardos might look like, though he always seems to be grumbling about something, a discontent expression always worn on his face. He often likes to stomp his foot down to show his superiority, although age has begun to catch up on him and his attacks have been known to be executed much more slowly and even sloppily. On the off side he is also tired easily, and sometimes his entire frame shakes from old age.

Personality:
Remembering how difficult it was to simply survive "back in the day", Braxton doesn't like when the young'uns take the easiest of things for granted, and is certainly not afraid to voice his thoughts. This Rampardos is almost always cranky because of his tired muscles (and complains about it often also), but when the going gets tough he will be the last to give in or give up. Living in the breeding facility has instituted an almost fatherly nature inside Braxton, and it shows when he tries to protect those around him. He still complains about it, though.

Negative's Notes:
- He's always complaining about something :U
- Avoids looking up to the stars at night
- Original Profile: www.epidemicjohto.com/t2857-