Mango and Chips the Superhero Charmander and Sidekick Pichu ((inactive))

Mango and Chips the Superhero Charmander and Sidekick Pichu ((inactive)) 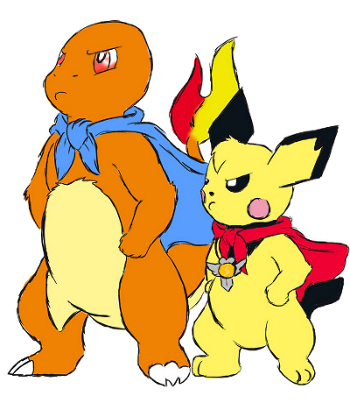 Pokédex Entry The fire on the tip of its tail is a measure of its life. If healthy, its tail burns intensely. (Black/White 2)


History
By the power of all things illogical, I am MANGO-MAN!

Mango was born to a Charizard and Hydreigon in a cave. The two were retired Champions living in the expanse of their owner’s land. Mango’s mother presented him to the owner who doted on the small Charmander like he did his own children. Mango was allowed inside to play with the children if he promised not to hurt them but that was not what interested him the most. He sat with the children watching something they called “cartoons”. His mind still wrapped in the ribbons of childish bliss said he had to be that. That being his favorite cartoon character “the superhero”. Mango and his newest friend a Pichu named Chips started training themselves to become superheroes. Though a normal Pokemon would train itself in dodging attacks, retaliating and break for a Poffin, Mango was not normal. He practiced looking cool with his cape blowing in the wind, striking awesome poses and making sound effects when he hit things. Mango decided he had to get a sidekick just like Zubatman had his sidekick Pidgin. His sidekick was to be Chips! He took the younger Pokemon under his wing teaching him the awesomeness of being a superhero. His true power was tested in a battle against his greatest foe. The demon they call… Woman.


This woman was simply a Dragonair who pushed his buttons purposely. She beat him up simply because she was bigger and stronger and he was small and weak. Eventually Mango decided enough was enough getting quite angry at her and using Outrage which until that moment he didn’t realize he had. The Dragonair retaliated viciously like never before knocking Mango’s lights out. Chips jumped in with his Volt Tackle before dragging him away to get looked at. His eye was bloody but that was just from the force of the attack and wouldn’t be serious unless it started to hurt bad or if his vision went black. Mango didn’t like that the Dragonair had tried to turn him evil by drawing out a power that he didn’t know was there. It was pure evil! It had to be or else he would know it. Just for safety measures, his father taught him the TMs Flamethrower and Hone Claws. So if he ever found himself in another altercation, Mango would not be one to be trifled with lightly. Mango liked the feeling of being powerful! He went to Chips teaching him the TMs Thunder and Protect saying as a sidekick, he was required to be strong yet defensive in case they met an evildoer. Unbeknowst to them, the world was soon populated by evil.


The bird Pokemon came on the wind calling it the Epidemic. Mango did not know this! The Epidemic sounded bad yet slightly good for his hero career. But he wasn’t used to killing things. But his father told him, it was either them or him. That was the last thing Mango heard from him. Taking Chips and fleeing for safety was priority but his father had tried to escape with their owner. Mango couldn’t fly so of course he couldn’t follow him managing to stick to the ground and avoiding cities at all costs. To rid the world of all evil!

Mango is a regular Charmander except he wears a blue cape

Item His cape and necklace

Pokédex Entry The electric sacs in its cheeks are small.
If even a little electricity leaks, it becomes shocked.
(Black/White 2)

Characteristic Somewhat of a clown

Chips is the son of a champion Raichu who had been raised to be a formidable opponent yet was used to being a support. Chips was the same way. The little Pichu was small and scruffy not a battler at all but he was still trained and taught to be powerful. Chips was told if you’re gonna dream you might as well dream big! He wanted to be tough and powerful like his dad and his teammates. But even more so like his newest friend Mango. Mango was a Charmander who always played with Chips and taught him the way of the superhero and his sidekick. Chips liked being Mango’s sidekick. They always stood in front of fans letting their capes blow in the wind or chasing a thieving Rattata from the kitchen. Chips had always watched Zubatman with Mango finding the thought of being a superhero like that saved for evolution into Charizard and Raichu. The Mango could fly and Chips could get a grappling gun! Chips was dreaming really big this way like he had been told to.


Chips did not always agree with Mango though. Sometimes Mango agitated a Dragonair into attacking them. Chips could bare taking the Dragonair’s electric attacks but the others just made him run and hide in the cabinet. He always had to drag Mango away from the fights so the Dragonair didn’t kill him. Only once did it turn bad causing Chips’s dad to step in and stop the fight. Mango’s eye was messed up in the fight but the injury came and went whenever they got into fights with evildoers. But Mango looked out for him all the time. Even bringing him two TMs to make him stronger yet keep him safe. Chips was also given his pendant from his father. His father told him that his mother who had died shortly after laying his egg had intended to give it to him. The pendant had a slit in it so it doubled as a whistle for him. Chips could use it for… Announcing evil’s presence! His father gave him a Thunderstone to hold in the pendant for when he wanted to evolve. Chips thanked him and went to show Mango. Now he was sure that he would become a great sidekick! To thwart all evil that dared to come and find them.


Evil did find them. Caused by something called the Epidemic. Chips was not used to Pokemon hordes trying to eat him but thankfully his dad was there to defend him with Electro Ball. Before Chips could ask him how he could learn that attack, they were separated. Mango taking Chips to safety and his father rushing off to stop a raging Gyarados. Chips was sad to be separated but with Mango he knew he would be safe. For now…


Chips is the typical sidekick being goofy, aloof and willing to follow Mango’s orders

Mango and Chips’s moves are poor in their hands due to lack of proper control and mindset while Mango can use Outrage and Flamethrower, they tire him out very easily same with Chips’s Thunder attack

Your Charmander is horribly overpowered for someone so young and there is no mention of him ever receiving training to earn TMs with. Please tone him down a bit.

Your Pichu is even more hideously overpowered bordering on godmod. Tone them both down or I will not pass them.

Replace Thunder and Flamethrower with something else and it will pass?
Mew

@Mewtwo wrote:there is no mention of him ever receiving training to earn TMs with. Please tone him down a bit. Tone them both down or I will not pass them.

It would require rewritinng to meet the standards set forth by mewtwo, dear. Changing the moveset, history, and usernotes to make them not overpowered is what is expected for them to pass. They need to have justification for knowing TM moves, etc.
_________________
Maintainence/Coding Admin

If he was a really old trainer and never had any intention of battling with the Pokemon he wouldn't have bothered to teach them Ultimate TMs to protect themselves. Those are some of the most powerful moves in the game and you are trying to give them to children.

Them never using them is a way to balance them out but I still don't believe the Ultimate TMs should be there. Flamethrower and Thunder are your problems in this profile. I suggest switching them with something less powerful.
_________________