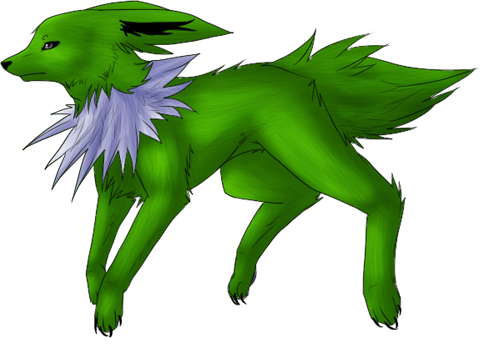 Pokédex Entry-
A sensitive Pokémon that easily becomes sad or angry. Every time its mood changes, it charges power.

History-
Salama was born in the Johto region. She was different from the very beginning- she was discolored, almost simular to a shiny, but not quite. Her fur was a brighter shade than the normal fabled shiny Eevee. But no matter what she looked like, the intelligent little fox enjoyed life in the beginning. She had seven brothers and sisters, and even though she was the only different colored one, their mother loved them all equally. Sal adored her mother from the very beginning and enjoyed following her around and asking questions often. It was a nice and innocent kind of life. The Eevee had fun with all of her siblings and got into trouble with the rest of them, despite being one of the eldest. She was always quick to rough up with her brothers and was not afraid to get her beautiful pelt dirty. Salama found her passion early on in life- justice. She adored and looked up to no one more than her version of super heroes.

She asked her mom constant questions about the fabled super heroes, but she never got any good information. This dampered her spirits and Sal was soon becoming bolder and bolder to learn more about them. She began to wonder away from her family often, going off in search of anyone that could help her. It did not take Salama long to realize that owned Pokemon were her biggest help- most just pushed her away but others spoke of things called comics that told endless stories about Pokemon and people alike with fantastic and supernatural powers. It was then that she made her decision- she would BECOME a super hero. Salama had no idea how and when she told her brothers and sisters her dream, they all ridiculed and teased her. That day changed the discolored Eevee. It hurt her that she was just pushed aside so easily and without explaination.

But with her newfound isolation came a newfound determination. Sal decided it was time to evolve. She was still extremely young, barely older than a toddler really, but she was sure that evolving would help her somehow, either with making her siblings cease bullying her or make her stronger. It would make her be respected, surely! Salama began searching for anything to help her evolve for days- any kind of stone- and told herself that she would take whatever she would get; fate already knew what she would evolve into. Her hard work paid off one day when she found a tantelizingly shiny stone. It was a light green with a gold lightningbolt inside. Salama tan over to it and found herself being the first of the litter to evolve... Into a neon green Jolteon. At first she was shocked- she had expected to look different but... But THIS? She was ashamed and horrified. What would her mother say? Her siblings? She was now the largest, only second to her beloved mother, but was by no account the most mature. Salama was heart broken and instantly regretted fighting so hard to evolve without thinking of the consequences.

Sal did not go back home that night. She stayed awake for many hours contemplating and thinking of what her next course of actions would be. Eventually she came to a decision: Salama would no longer admire her superheroes... But BE one. And so Salama ran away from her home and began training. At first she had to only battle little, weak opponants, but soon she worked her way up. The green Eeveelution was not strong, not yet, but she was fighting hard to train. For years she honed her body, developing ways to outwit her foes instead of just overpowering them, and during the time she cane up with her superhero name:  the Green Watt. It was PERFECT! She was green and dealt with electricity! After a time, though, the Jolteon's mind began bending. She was so obsessed- so in LOVE with justice and the Green Watt- that she slowly severed herself from it. While Salama became more and more timid, sinking farther and farther into her own head, the Green Watt just grew in power and confidence. Soon, for reasons not consioisly known to the Jolteon, they became two 'seperate' Pokemon.

Soon enough Salama was ready to return to her family. She wanted to show them how strong she had become! How much of an awesome SUPERHERO the Green Watt was! But it was not meant to be. The Epidemic hit before the brightly colored Jolteon could make the journey back home. As undead began to show up, she knew that there was no way her family could survive. Salama began to let the Green Watt take over more and more often, always sure that she would keep the Jolteon out of trouble easier. But Sal soon found herself exhausted and cornered by a duo of undead Machop. She would have been killed and devoured had a stranger never shown up. As the two undead had the Jolteon trapped in a shrinking cavelike structure, a pink blir cane out of no where. Salama could only stare in wonder as an Espeon valiantly fought the two undead, defeatin them easily. She had many different colored scars licking what seemed like the entire expanse of her pelt, but when the Espeon turned to Sal there was nothing but releif and love. The Espeon helped to calm the youngster. Sal immediately loved the other female. They traveled together for a few hours. Salama was heart broken when the Espeon admited of needing to part ways with Sal, leaving with a heartfelt goodbye.

After that Sal just did what she could to survive. However, there was an extremly odd surge of energy that suddenly ran across the land. Salama suddenly found herself in an incredibly dark place with human buildings. There was a fire once, even, and it just frightened her more.

Appearance-
Salama is not your average Jolteon. She is a shiny Pokemon, for starters, and thus is very rare in that itself. However, her fur is en even deeper, brighter shade of green than even the normal shiny Jolteon. It is such a bright shade of emerald that she avoids stepping into sunlight at all costs, more than awear of how her fur is so blindingly bright and attracts all the undead attention around her. Her fur itself is  aturally silky soft and well kept for a Jolteon. She still has the spike collar and tail but she usuallyhas her pelt down more than average.

The parts that are white of a normal Jolteon are still the same color, not affected by her odd coloring at all, nor are her inner ears different. Her eyes, however, are a soft shade of Lavander. They are usually wide, portraying her innocense, and are a duller shade of purple, not clashing too strongly against her bright pelt.

Despite how she keeps her fur clean and well kept without doing anything, she does not have a calm personality and it shows in how she holds herself. Salama normall crouches, her legs seeming to always be bent as to make her appear smaller, along with her ears almost always flicked back in submission.  But when she is the Green Watt, her entire demenor changes. She always stands tall and proud, her ears flicked forward with confidence and her tail spikes poised and ready.

Her body is fairly thin, as are most Pokemon of the Epidemic. She has the dainty paws of an Eeveelution and long legs.

Personality-
Salama is very quick to flee, easily frightened. She is very sensetive to loud words and cursing as well as offensive posturing. She is an empath, easily picking up on the emotions of those around her. Due to this she has not stayed with any group of Pokemon for more than a few days. Most are vry suspicous of her and turn on her very quickly. This has made her wary of trusting, but will completely base her veiws of you upon first impression.

Because of all of the stress that came after evolving, Sal is almost ashamed of her discolored pelt. She very often will hide from others if they approach and often bashes herself with her words and actions. She will not stand up for herself often and has become very flighty.

Sal may have low self esteem and avoid others, but the Green Watt is neither scared easily nor is she one to run from a fight. Salama and the Green Watt are technically the same Pokemon, but to Sal they are just two completely different personalities in one body. When Sal is 'awake', the Green Watt is 'asleep', and whenthe Green Watt comes back out, Sal 'blacks out' only to come to when the superhero goes back to 'sleep'

The Green Watt is a super hero, no doubt about that. She is bold and often rash, loudly proclaiming that she can handle anything that is thrown her way. She is extremely agile and quick on her feet, able to dodge easily and confidently. She may not have raw power, but the Green Watt knows how to use many different combonations of her moves to defeat a foe. This alias is very outgoing and always is there for Sal if she needs her.

User Note-
-One of Kidrana and Plauge's daughters
-Her fur is just naturally soft and smooth. Despite being a reckless child and never really cleaning it without her mother around, Sal always finds her pelt righting itself, it seems, and soft to the touch.
- The scarred Espeon was my Hera :3
- Forgot to mention >.<' But she originally heard about superheroes during a play day with her siblings. She spoke with a wild Pokemon in the area that heard about them from an owned Pokemon
- Beleives her family to be dead
- Her father is a sensetive subject. She can sometimes talk about him well enough but it hurts to think about him. She has never met him and imagines him differently, depending on her mood, though nothing is accurate
-During their short time together, Hera and Sal found an abandoned himan camp. There Hera discovered the Tm for Volt Switch. She taught it to Salama, having the knowledge from being human owned, before they parted ways
- Mewtwo's freakout transported her from Johto to Under, Orre
- The fire was from the big fight between Deliah and Cathel

I hope I explained everything correctly. I rushed a little orz

Last edited by Ciana on Fri Aug 24, 2012 6:37 pm; edited 2 times in total
The author of this message was banned from the forum - See the message
renegade

Salama is ready to be approved!~
Snitch

Omg, I love her! I'm even more jealous that I'm not in the Under team now! xD
The author of this message was banned from the forum - See the message
renegade

Thank you so much Snitch<3 That means a lot to me :')
Silverishness

AND THE ONLY CURE...

OUR JOLTEONS SHALL BLOT OUT THE SUN! I MUST MAKE ONE SOON!
The author of this message was banned from the forum - See the message
renegade

THEN BREED THEM AND MAKE MORE JOLTEON
Mewtwo

Wow. That's a lot of Jolties. But, if that's what the public wants...