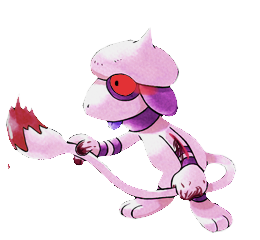 Name:
Bonnie
Species:
#235 Smeargle / The Painter Pokemon
Approximate time of infection:
Two Months Ago
Known Moves:
Slash (Learnt from Vigoroth)
Hammer Arm (Learnt from Vigoroth)
Spark (Learnt from Manectric)
Aerial Ace (Learnt from Fearow)
Height:
4’00”
Weight:
120lbs
History:
Bonnie was born in the Ruins of Alph and spent only a short time with her loving parents before she was caught by a trainer, a petty criminal travelling the region and looking to build a team up. The smeargle was relatively naive and particularly friendly towards both humans and pokémon, however that was soon to change as she befriended the trainer’s only other pokémon, a particularly aggressive vigoroth called Clyde. Whilst she was slightly intimidated by the pokémon at first, it turned out Clyde was secretly a big softie. He’d been moulded to uphold his trainer’s reputation and attack to protect, but to Bonnie, he was just a misunderstood gentleman. The pair bonded quickly and Bonnie was gradually taught how to act, so as to avoid being abandoned by the trainer – if his pokémon were not strong, they would be left without a second thought, which was why Clyde had been alone. Fortunately, Bonnie was a fast learner and was growing in strength, intelligence and aggression every day. The trio soon became relatively infamous in the region, known for committing numerous robberies as well as the occasional attack in order to secure their needs. Bonnie had grown oblivious to the law-breaking and although she refrained from harming humans, she loved the thrill that this new life offered. She was strong, she was respected and that was a totally foreign sensation which she had grown to adore.

When Bonnie reached level 41, the trio decided to rob the Goldenrod City pokemart. All was going to plan when the police suddenly burst through the door, having received a tip off earlier in the day. Leaping into action, Bonnie and Clyde fought loyally to protect their trainer and the smeargle was soon pitted against a manectric working on the force named Harley. After Bonnie learnt spark off the canine, the battle continued on for a few short minutes before Bonnie fainted. When she came to a few hours later, she found herself in a cage with Clyde who sat protectively beside her. He explained that they’d been over-powered by the authorities and that their trainer had been arrested, leaving them in police custody for the time being. Their temperaments would be assessed before a decision could be made on whether they were safe to be re-homed. Deciding they weren’t going to stand being judged by the humans, Bonnie and Clyde escaped later that night and fled into the wilds of Johto – making a pact to start afresh, completely free of human influence.

The weeks that followed were the best of Bonnie’s life. She’d never been happier with Clyde and without the constant need to look out for their trainer, her joy was only heightened. The pair didn’t have a care in the world and every day they grew closer and closer. However, the happiness was disturbed with news of the epidemic taking hold of Johto. Concerned but eager not to be negative, they decided to sneak onto a ship and travel to a safer region. As they travelled towards Violet City an infected fearow suddenly swooped down to launch an attack at Bonnie, the aerial ace was a direct hit and the smeargle instinctively used her final sketch to learn the attack that effectively killed her. Clyde suddenly leapt forward to kill the diseased bird with a single attack – ruthlessly decapitating the pokémon as its blood sprained onto an injured Bonnie. Although not badly hurt, Bonnie’s breathing was ragged, but she insisted that she would be fine after they got some rest. Helping the smeargle to her feet, Clyde led his companion into the safety of the trees where the pokémon gradually weakened before passing out completely.

When Bonnie awoke, she was greeted by Clyde sitting loyally, if slightly uneasily by her side. He hadn’t slept a wink and had already begun to fear the worst for his companion, begging that when he had gone to take her pulse, he’d only imagined that there hadn’t been one. Bonnie was suddenly overwhelmed with the urge to attack and a savage headache was only fuelling the aggression, but she waited, wrapping her tail around the tree in an attempt to keep herself under control. Scared of the new sensations, she admitted her feelings to Clyde who sat in silence, torn between tears and a smile as he looked down at his friend. It wasn’t until she subconsciously aimed an aerial ace at the vigoroth that she realized what had happened to her. Clyde had dodged and now sat at good few feet from the smeargle, his face contorted into an expression of intense, emotional pain. Bonnie broke down into tears, covering her face as she began muttering continuous, slurred apologies, her body slowly changing as the virus gained strength over her. The two of them stayed in these positions for quite some time; Clyde reluctant to leave his love, and Bonnie desperately trying to keep a hold of her conscious. After a few hours of silence, Clyde knew what had to be done. Unable to bring himself to kill Bonnie, with a final apology and long, pained look at his friend, he disappeared into the trees, knowing that it was the best option for both of them. It didn’t take long for Bonnie to forget about Clyde, however, his name was the only other word that she was capable of uttering weeks after she’d been infected – along with ‘sorry’.

User Notes:
- As a smeargle, Bonnie is naturally artistic and still indulges in her gift. When she makes a kill, she will rarely tear the pokémon to shreds, but leave it conscious as she gradually removes its internal organs, in order to create art. Detailed images are often found beside bodies of her victims, fashioned out of a combination of organs, flesh, blood and occasionally bone. She will usually hum when creating art.
- Bonnie doesn’t remember Clyde, but continues to utter his name when hunting, usually accompanied by slurred apologies.

OMG Such a sad story ;o;

I just checked your tickets though, and you have none free.
Have you killed off any of your characters?
It might not have been updated.
Your serperior is still listed as your undead.
_________________

I traded 50 points for my first character ticket, Suicune. I PM'd Lugia about it, hope that's all okay c:
Suicune

Could I join Mortar? c:
Negative10

D; Amg, I just finished reading... and wow, that was glorious, Gloriously heartbreaking, but glorious nonetheless. I will enjoy role-playing with another of your amazing characters~
Sponsored content