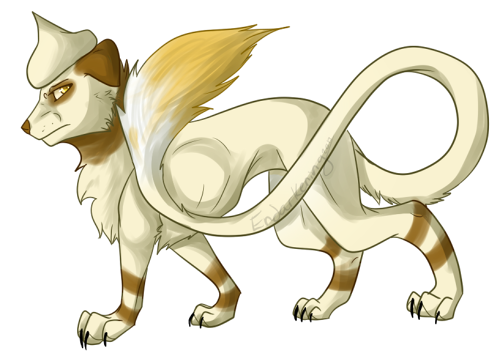 Pokédex Entry-
Once it becomes an adult, it has a tendency to let its comrades plant footprints on its back.

History-
The golden Smeargle was born to a very powerful trainer. She had won many battles for the few decades she had been battling with her beloved Feraligatr by her side. She had wanted a Smeargle for many years and had managed to obtain one through the day care man, whom had one handy when a trainer failed to return and get the egg. And so the trainer was thrilled when the egg finally hatched after a week. She was thrilled to see that she was not the common green or red, but instead a fantastic and royal gold. She named the beautiful girl Peintre, meaning painter in the language of love, French.

Peintre was thrown into training as soon as she was strong enough to endure it. The trainer made her Espeon stay by the golden Smeargle's side during battle, making sure that Peintre would not faint. After a few weeks the baby Smeargle slowly began to steadily grow in level beside the motherly Espeon. She even let her use Sketch upon herself all the time to learn her strongest attack, Psychic. Peintre was proud of herself, sure that she was beginning to show her trainer just how good of a fighter she could be. But the older woman did not agree. She could see that the Smeargle was trying but she was no where strong enough to partake in real battles. After a few mounths and her still not above level fourty five, the woman decided it was time to throw in the towel. She was not a cruel person but she did not have time to waste. As a result, Peintre found herself living by herself in the Johto region, abandoned by her trainer.

This broke Peintre's heart, but she did what her species had been known for the first time- she painted. And she was damn well good at it! She found herself living in the wilderness between the Moo Moo Farm and Olivine city, painting every tree that she could get her paws on. She was actually very happy during this time in her life with just leisurely painting and no more training constantly everyday. Even trainers rarely tried to capture her. If one saw her in the woods than they would ask for a friendly pokemon battle or even offer food. The humans  adored the beauty that Peintre provided in the normally dull forest. But one human took more than a common intrest in the golden Smeargle and that was an old painter by the name of Jack Pollockson.

Jack approached Peintre one morning, offering her some pokemon food and berries like trainers always did. She happily took the food. While the Smeargle happily ate the food, Jack made a proposition to the talented Smeargle. He explained of how he was a professional artist, how he had been very well known and famous years ago. He spoke of how his sucess had gradually declined until he was just an old man with a lot of money. Jack then smiled at Peintre. "I am going to try to recapture the hearts of people again. Not for money and not for myself. No, I want to show the talent of pokemon. Those that inspire me. I would be honored if you would help me to acheive this goal. Will you join me in this partnership?" Peintre heartily agreed to go and work with the old man. Just the thought of painting for a living sent happy chills down her spine.

Within a few weeks Peintre was working along a Red Smeargle and a Blue Smeargle in Jack's home. The three were a little heard headed and found it difficult to work together at first, but they soon realized that their own unique painting skills only worked masterpeices when they cooporated. Peintre became the unofficial leader of the group, despite being the only girl, because she was the inly one to have lived in the wild on her own and she had the highest level. The trio made many abstract masterpeices for Jack Pollockson over the many years that they painted for him. He was a humble man and treated the three like family and never pushed them to do things they did not want to despite how much money he made. It was a fantastic life for Peintre and she simply loved it.

But the worst happened when the Epidemic hit. There were many undead in Johto within a very short period of time and Jack tried to protect his beloved Smeargle. In the end, he was forced to send them away, releasing them, as undead surrownded the mansion they lived in. It broke her heart but she fled with her companions. The famous trio tried to stay together, but were seperated within a week. Peintre found herself all alone. And it was much worse than last time. Knowing the move Fly thanks to her Sketch move, she simply used it for transportation until she was too exhausted to use it anymore.

Appearance-
Peintre is nothing too exciting for her species. She is slim and long, but her body appears to be more feral than humanoid. This is due to how often she prefers to walk on all fours.

Her paint brush tail tip is completely white, gold marking her paint color. The same soft yellow is the same color as the paw print on her back and her eyes. She has a few more rings around her legs than normal.

Personality-
Peintre is a hardcore tom boy. She refuses to be looked upon due to her size and gender. Due to this, she tends to have a loud mouth or even do stupid stunts to prove her worth. She even prefers to be thought of as male and has masteredthe art of speaking in a lower voice as to make others think that she is a boy.

She is fairly rash and does not tend to think things through very often. She will take almost any dare without hesitation. She has no shame but is extremely proud.

She has a fantastic eye for art. She finds  eauty in the smallest of things and could go on about ot for hours. It breaks her heart to see the way that the world's culture has been nearly whiped out due to the infection.

She does not get lonely easily. She can easily entertain herself with her thoughts and would much rather live in her own memories and thoughts than talk with those around her. But despite this she is not shy.

Originally my character B]

Last edited by Kuuniline on Wed Feb 20, 2013 9:37 pm; edited 2 times in total
The author of this message was banned from the forum - See the message
renegade

She may be activated, yes? c:
Mewtwo