Jewel and Jazz the Glaceon and Eevee ((Inactive))

Jewel and Jazz the Glaceon and Eevee ((Inactive)) 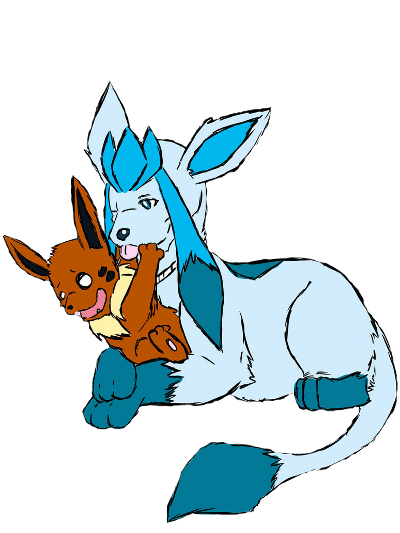 Item Nevermeltice shard around her neck

Pokédex Entry By controlling its body heat, it can freeze the atmosphere around it to make a diamond-dust flurry. (Black/White)

Jewel was born alone. The tiny Eevee wobbled to her new legs immediately falling flat on her belly. She cried for someone to help her and was answered by a Floatzel. The Floatzel had a small Buizel with her already so the tiny kit was no water off her back. Jewel was adopted into the family of sea weasels as a sister of sorts for the pup Baloo. That was not the case. Since both of them knew they weren’t related by blood, Jewel developed affection for him even at a young age. Growing closer over the years made the feelings stronger and they were inseparable. Mostly Jewel watched him train and they shared a bed but if one of them went away then the other was completely lost until they came back. While it was not Baloo’s mother’s intention, she did not try to separate them knowing what it meant to truly love someone. Jewel was content this way. She had never liked rushing outside to play and only training herself when none could watch her. That was her sense of a training regime. It would help when she braved Mt. Coronet to Snowpoint to become something beautiful for Baloo. Her luck changed in the form of a Dragonite headed that way and offering to take her there. Jewel slipped out while Baloo was asleep and away to Snowpoint.

Jewel had so much on her plate this time. The Snowpoint Pokemon were much stronger then the ones from the Valley Windworks. She struggled to gain one simple level and failed. Then came the trainers. Eevees that were unevolved were rare around Snowpoint and no one was going to let her escape. Jewel relied strictly on her Run Away ability and the speed she had from being small and sure footed. Eventually her speed was enough to outdo and outsmart foes. It resulted in her plus one level gain and evolution into a Glaceon. It was also the day she was captured. A Pokemon hunter looking for the most flawless Pokemon got a hold of her. Jewel’s natural beauty was rare. Her fur had never been touched by a brush or any sort of expensive grooming materials yet it had a shine and texture most groomers and breeders dreamed of. Any kits that came from her would fetch a high price so preparations were made for her to be bred. Expensive immunizations to increase her chances of immediately getting an Egg and just to make sure she seemed appealing to any potential male, Jewel was trained and taught Retaliate just in case. She did not like or understand this. Jewel had to return to Baloo. He was the only one she knew who could protect her from this. Other Pokemon told her to just hope and keep herself appealing so the hunter wouldn’t kill her. Jewel just wanted to go home…

Jewel refused the breeding at all costs. Despite being revered for her flawless fur, every male she was left with tended to bite and scratch at her. That was where Retaliate came in. Males refused to come anywhere near her and much money was wasted infuriating the hunter. He tossed her out in anger after beating her severely. The negative outcome of all the shots she had been given had an adverse effect of being used too many times making her possibility of having children drop drastically. She was only to be given one shot a month but at most the drug had been overused. The many years she was stuck with the horrible hunter for breeding with the horrible shots, the constant aggravation of more persistent males and just being without Baloo was painful. But after many unsuccessful attempts at breeding, the hunter cut his losses and threw her out in Eterna Forest to die. However Jewel knew this area like the back of her paw since her and Baloo came to play as kids. She made her way back to the Valley Windworks to find her beloved Buizel. Baloo’s mom of course did not recognize her since her body had changed so much but after many hours of telling her everything that only Jewel could know it became obvious. She sent Jewel to Baloo’s den where the Buizel had stayed since she left. Unlike his mother, Baloo could tell it was Jewel just by looking into her eyes which had not changed since the last day they were together. He was astounded by her beauty as a Glaceon and gave her the Nevermeltice necklace. Together at last, the two were truly inseparable once again.

Jewel thought of having a kit or two now of all times. In her mind she didn’t realize the damage the shots caused to her internally so nevertheless she tried to have a kit with Baloo. Every time the egg’s shell was too brittle or weak to even survive a second outside of her usually breaking on contact with even the softest grass or just never hatching. Ultimately coming to blame herself regardless of anything and weeping over the broken egg or the egg that simply refused to hatch. Baloo’s comforting helped at times but to Jewel it was her fault. She was just unable to actually have her own child until… A small sickly and weak Eevee forced its way from a recent egg nuzzling close to her. Jewel kept the kit warm and safe but it was never enough. The tiny kit was taking his wobbly first steps outside when a Staraptor swooped down taking him away for an easy meal. Jewel tailed that Staraptor for days and watched curiously as it simply fell from the sky dead. Her kit was a mangled mess as she expected but the Staraptor’s chest was torn out and was a hollow cavity of decay and mess. Jewel had never seen this before… It was her first hint of the world being changed by something…

The Epidemic they called it. Jewel was not sure what had happened here. She travelled the regions searching for answers like many others when again she was given an egg from the Legends above. Jewel wanted to abandon the egg fearing it would die even if she interfered. However Arceus smiled down upon her giving her a fluffy healthy son. He was not weak nor small and to her it was a miracle. Jewel raided the human PokeMarts and Pokemon Centers to find TMs her son who she named Jazz could use to help defend himself thanking the hunter’s Pokemon for teaching her to operate the TMs. They came across a few friendly Pokemon who offered reassurance and even a tribal Infernape who Jewel knew from her time with the hunter despite being crazy had childishly dyed Jazz’s cheek fur to have Buizel whiskers. Even so they stayed safe together. They were going to survive this world and find Baloo to live happily.


Appearance
Glaceon is a fox-like creature covered in light-blue fur, which can be frozen into sharp quills. It appears to be wearing a tuque on its head. Glaceon's inner ears, two spots on its back, tail end and cap-endings are all rhombus-shaped and darker blue, in contrast to the soft cyan main body color. Glaceon also has a similar shape on its back. Glaceon's feet are also a dark blue color, giving it the impression of wearing boots.

Jazz was not sure what he had been born into. It was wide and open. There was a bright thing in the wide blue above that hurt his eyes. There was soft green stuff under his belly and paws. Even more so, there was a soft humming above him. Jazz only looked up to see a blue creature who started licking him. At first he did not want this. He struggled a bit until he realized resistance was indeed futile. Jazz was taught that the bright thing in the wide blue was called the sun and the wide blue was the sky. The soft green stuff was called grass and the blue creature was Momma. He was told he was the son of something called a Buizel that swam fast and was unstoppable. Jazz indeed liked that. Was he a Buizel? Jazz had to be a Buizel! Momma carried Jazz around everywhere she went. The wide and open place he was in seemed endless. There was much to see and do! Momma gave him shiny round things (TMs) saying they made him powerful like his Buizel dad. Jazz again liked that. Jazz and momma met a creature who’s head was on fire and talked funny. Momma knew this creature and trusted Jazz to be left with him. The creature put stuff on his face that at first smelled really bad and made him curl his toes but after a bit it didn’t bother him.

Momma told Jazz they were gonna travel lots and lots until they found his Buizel dad. Jazz was not sure how they were gonna do that ‘specially if momma kept attacking all the other creatures that came at them. He wasn’t sure of anything just that he was never far from Momma even if he wanted to be…

Eevee is a mammalian creature with brown fur, a bushy tail that has a cream-colored tip, and a large furry collar that is also cream-colored. It has four short, feline-like legs with three small toes on each foot. Eevee has brown eyes, long pointed ears, and pink paw pads. It has traits of rabbits, Miacids, foxes, dogs, and cats.

Jazz is for obvious reason a momma’s boy

He believes he is a Buizel in a Eevee’s hide

If he’s hit lightly on the head or scolded, he falls on his side and lays there and sometimes bats his paw at whatever has hit or scolded him for some odd reason... Its just his own little way of being weird

I believe I've done all possible edits ^^
Can these two be moved to the Main PC for approval?
Mewtwo

Your Eevee's TM moves should be in his history as I had to hunt for them in his mothers. Always put such vital information in the history of the Pokemon it affects.

They're just like human hair dye so they'll fade in due time but it was an Infernape who did it ^^
Should I put that in the User Notes?
Mew