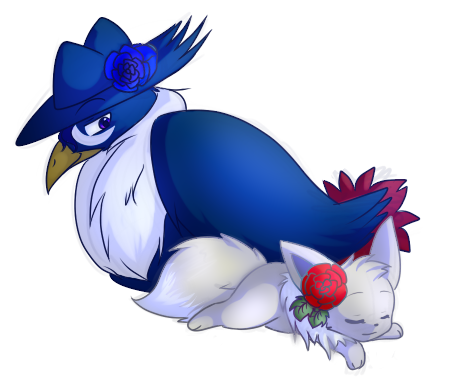 Pokédex Entry: "Its ability to evolve into many forms allows it to adapt smoothly and perfectly to any environment."(Crystal Pokédex)

"It has the ability to alter the composition of its body to suit its surrounding environment."(Heartgold Pokédex)

Item-
Red Rose; An item Ib mysteriously found near a mansion in Eterna Forest. She finds it special as it doesn't wilt away quickly. A pretty red rose that looks too beautiful to be real.

Lace Handkerchief; A birthday present given to her by her trainer.

Isabelle was born in a small litter of two. Her overprotective mother being a petite Glaceon, whereas her father was an intimidating Beartic, both owned by the same trainer. In her early days where she was just born, she had no idea she had a sister, nor did she have the idea that her sister had been adopted shortly after their birth. She grew up as an independent and quiet child without knowing the existence of the other Eevee as her parents worried that Ib would not handle the truth of her sister; Mary. Nonetheless, she lived a quiet normal life in a quiet home of a senior trainer.

No one realized Ib was a shiny until the trainer noticed it, but the trainer treated Ib with the same love and care as he treats everyone else. Despite the Shiny Eevee having the cursed crimson-red eyes, they all treated her like everyone else; a friend and family. The Evolution Pokemon was too young to battle, so the trainer would only hand Ib a rare candy every now and then, even teaching her a couple of TMs in case something were to happen. In that quiet home, she spent a year living in it, being given a lace handkerchief by her trainer to celebrate her birthday. She treasured it so, always holding onto it.

A young girl named Ib visits an art gallery with her parents.

But something bad did happen, the Epidemic swoop down and took down her family one by one. All of them going insane, missing, and died in front of the Eevee's eyes; her parents, her trainer. All of the trainer's Pokemon soon died off except Ib, the young Eevee that once spent her days in a quiet little home of a senior trainer now slipped away like sand. Saddened and fearful for her life, the Evolution Pokemon ran from the home she treasured so much, trying to regain back those happy times of when she was living in that place.

While observing the many exhibits, she suddenly realizes she is alone.

The Eevee realized she was now alone a month into the Epidemic and running. She had no idea how to defend herself, even using the move her trainer provided her, but Ib shall endure it all. She'll try to be tough and get it over with. The Eevee forced herself into thinking that the Epidemic was not reality, she shall get it over with and return to those happy days with that small home.

And in her search for others, she finds things awry in the gallery...

Eterna Forest, she had found a pretty red rose that stood out among the wilted ones. It was alive and well, Ib plucked it from its bush, feeling hope bubble inside of her. It was then she met Garry shortly upon getting the rose. He was an odd Honchkrow, he had a rose too, a blue one, though he is much more older and stronger, he was timid and rather jumpy. Despite this, he was kind to Ib, and watched out for her as he did not want to leave a child by herself in such a dangerous world. The duo teamed up in hopes of searching for other survivors and getting out of this situation.

Appearance-
Ib is a shiny Eevee whom is quite small for her age. Her fur is rather silky and thin compared to an average Eevee's thick and ruffled fur. Her fur is rarely seen dirty, as the Evolution Pokemon often takes care of it. Her eyes are crimson red unlike others, often she gets teased for it, but she doesn't mind much. A red rose she finds in the Eterna Forest is placed neatly on her ear as her Lace Handkerchief is safely tucked in her neck fur. Meeting Garry made her look more happy and outgoing, it's hard to see Ib alone and without the Honchkrow around to take care of her.

Personality-
She's rather quiet, and not exactly timid. Rather she is the 'silent, cool-type', but despite this, she's still a child and does yearn for company and puts her trust in others easily. Ib is brave even throughout the Epidemic -- only worrying about her sanity in the very beginning -- as she is much more curious than afraid of the monsters roaming about. Even so, she does have the mind to protect herself from danger, but due to her lack of battling skils, she flees rather than take a hit. She can adapt to her environments mentally and physically quickly thanks to her fearlessness. She's quite picky upon the subject of her family, however.

Pokédex Entry: "If one utters a deep cry, many Murkrow gather quickly. For this, it is called "Summoner of Night.""(Black/White Pokédex)

Item-
Blue Rose; An item Garry mysteriously found near a mansion in Eterna Forest. A pretty blue rose, like Ib's it doesn't wilt away that quickly.

Garry didn't remember much of his childhood, all he knew was that he had a wonderful family in the wild, but then that was taken away from him as he was captured in a tiny red ball by a trainer. Was it that bad to get captured? To the Murkrow at the time; yes, but now? He was glad that he was captured, he was glad the things that had happened in the past pieced together what he called his life. It was an early morning the day he was captured, the sun was rising, but he didn't want to sleep like his mother at father in the evenings. He liked it better when the sky was light blue, and the sun was high in the sky.

When he was captured that early morning, the trainer was unlike others he had always witness. This trainer wasn't exploring, nor was he aiming to be the best so quickly like others. He seems quiet, calm, and trains little by little each day rather than one huge training session like the others. Garry liked his trainer, they began to travel together, and eventually, the Murkrow evolved through a Dusk stone they had found in an expedition to Eterna Forest.

If your spirit suffers too much, you will soon start to hallucinate.

The Epidemic was a turning point in his life, it affected him and everything around him. He didn't watch his trainer die, nor of his comrades, but he was forced to run away by his trainer's commands. The Honchkrow didn't know whether his trainer lived or not, or whether his other buddies had lived or not. But he was not allowed to go back to satisfy his curiosity, because his trainer said to never look back.

And in the end, you will be destroyed.

He did not know whether they had lived, he was force to flee and defend himself. Garry unknowingly went back to Eterna Forest where he and his trainer first found the Dusk stone. He felt saddened as he retraced his steps, did his trainer live? Or did he fall to his doom? Either way, Garry knew he would never meet his trainer again, whether it be sooner or later, whether it be today or tomorrow. He would never see that trainer until the day his trainer commands him to.

And more worrying yet...

On the verge of fainting due to lack of food and water, Garry stumbled upon a rose bush, where everything was wilted except a single blue rose. It was mysterious, how did it survive? The Honchkrow plucked it from the bush, holding onto it as if his life depended on it. It was then did he meet a small Eevee known as Ib. She was lost just like him, she had a red rose instead, but she was younger, more petite. But unlike him, she wasn't afraid, the spark in her eyes never faltered, nor did she lose sight of her path. Garry liked that, because of Ib did he find the will to continue on this journey. He shall protect this little Eevee, thus beginning his travels with little Ib in the 'art gallery'.

Is that you will not even be conscious of that fact.

Appearance-
Garry appears as a normal healthy Honchkrow, he is the average height of one, but his weight has lessened due to the Epidemic. His eyes are a violet hue and are often seen soft rather than a fiery look. A blue rose is placed on his hat, giving off a mysterious vibe.

Personality-
The Big Boss Pokemon doesn't really live up to his title. Rather than being mean and rude, Garry is usually considerate and caring, mostly around Ib. He acts as Ib's guardian and takes good care of his friend, Garry is willing to sacrifice himself just for the little Eevee. He can get irritated and angry easily, being rash upon his actions. The Eevee usually handles this, and often stops Garry from doing something regrettable. The Honchkrow is rather jumpy upon arriving at new area, but he can adapt pretty quickly as Ib. He's also quite knowledgeable, and teaches Ib some new things in hopes of having it come to use for her someday.

Before he met the Eevee, however, he was quite monotone and never seemed to smile that much. He did ponder a lot in his younger days though, also as curious as Ib and thrives for knowledge.

> Garry's father is a Braviary, whereas Ib's father is a Beartic.
> The characters are based off Ib and Garry from the Horror RPG game; Ib.
> The roses are on the characters with the purpose of being a Flower motif. Ib's rose represents Courage, as Garry's represents Mystery.
> The roses are actually paper roses, not real ones, though they do feel and smell like roses, they are not legitimately real. Garry and Ib just simply mistaken them to be real.
> Ib's Text Color; #FF0000
> Garry's Text Color; #0D6CE0
> Mary's profile can be found here.
> Adopted!
> I fucking adore these two.

Re: Ib the shiny Eevee & Garry the Honchkrow | [inactive]