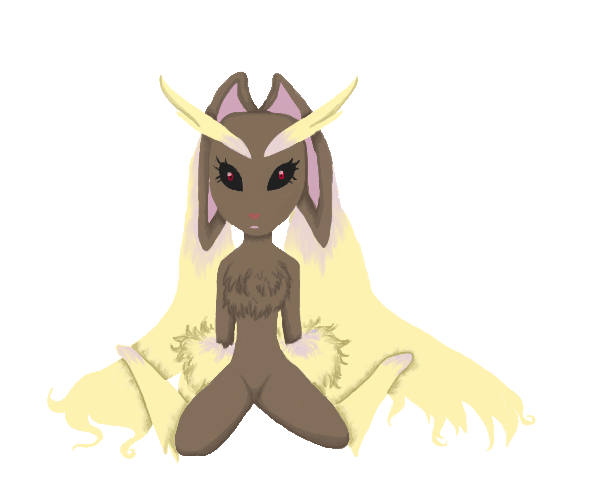 Approximate time of infection:
A few days ago

Pokedex Entry:
Extremely cautious, it quickly bounds off when it senses danger.

History:
Shiloh, like many others of her species, focused on contests. Shiloh's main technique in contests was putting on a magnificent fire-dance, spinning and tossing fire as if it were a baton. This technique proved to be quite successful, quickly earning her master rank in the Sinnoh contests. Looking for more contests, Shiloh, her trainer, and her teammates traveled through various regions. They entered numerous contests and other competitions. They were on a winning streak.

This winning streak eventually led the team to Johto. They had trained for months to finally enter the Pokethalon. Feeling confident, they entered. There were fewer contestants than usual; most had left for safer lands after the rumors of a disease began. This worked in the team's favor, as there were less people to get in their way.
Eventually, they did it. They were tired, but they had won their very first Pokethalon. They knew it wasn't much of a big deal, as they had entered the beginner's course. But they didn't mind. It was a happy day at that point, until Shiloh and her teammates got jumped by some sore losers (at least, that's what it seemed like.) The team was suprised, and thus recieved quite a few injuries. They eventually managed to fight off the attackers.

A day later, a mandatory evacuation for all humans was declared. They were to leave their pokemon behind. Shiloh's trainer couldn't bare to do this, so she smuggled aboard the ship her most prized pokemon, Shiloh. This was okay for a little while, but over time Shiloh started to feel a bit off. She felt numb, and the smallest things seemed to anger her. At one point Shiloh became very upset, and killed her trainer. When she returned to her senses she remembered nothing. She believed an infected attacked and killed her trainer. In a panic, she rushed out of their room to alert the other passangers.
The others did not take well to the presence of a pokemon on board. Everything devolved into chaos. People were paniced. Guns were drawn. Fearing for her life, Shiloh jumped over board and swam for safety.

Appearance:
Shiloh's infection is near-obvious, her paling of her fur and the purple sprouting from her ears a good indication. Her eyes are a bright crimson. Her fur is matted in some areas, the Lopunny not often bothering with grooming herself anymore.

Personality:
Pros: Kind, tries hard, determined, tries to be gentle, fairly amiable, sympathetic, tries her best to subdue her bloodlust, tries to protect.
Cons: Shy, extremely quick tempered--prone to snapping, paranoid/doubtful, gives up a bit too quickly, may hurt the thing/person she's protecting in her attempts to protect it, jumpy.
Others: Vicious fighter, tends to a bit more serious than others.

User Notes:
► Shiloh probably knows she killed her owner, but is in extreme denial.
► As she is only recently infected, not too many symptoms have appeared yet.
► Her hair does, however, already have faint purple streaks starting to appear.
► Her father Lopunny knew both Fire Punch and Sweet Kiss, both of which were passed down via breeding.
► Adopted! Nothing has been changed, except for the addition of appearance and personality.

I wish to activate this profile! c:
Mewtwo

While you updated to the new fields or Personality and Appearance, you forgot to add in a few.

Excellent, my only concern right now is that Sweet Kiss is only learned by breeding. Sorry, must have missed that one earlier.

I know she was an adopt and probably passed with that move once before, but it does need to be edited. Just keep in mind that in order to have both the Egg moves Sweet Kiss and Fire Punch she would have had to had a Father Lopunny who knew both since they don't pass from one species otherwise.
_________________

I edited so Sweet Kiss is an egg move, and added into the user notes that her father knew both moves. c:
Will that work?
Mewtwo

Yes, that should work.