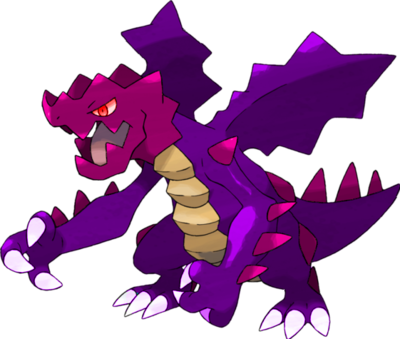 Michelangelo
His theme (to be listened while reading the history)
Name:
Michelangelo
Species:
#621 Druddigon / The Cave Pokemon
Approximate time of infection:
December 25, 2011

History:
Why... Michelangelo's thoughts ran off in his mind, tears welling up in his eyes. Why... did you leave? The injured Druddigon lay abandoned on the side of the road, the sun setting along with his hope of survival. The retreating figure of his owner broke his heart, with each echoing footstep stepping upon the broken trust the dragon had built for his trainer.

Long ago, the same Druddigon was caught by that same trainer, and their love was as bright as the sun, as gentle as a flowing stream, as fragile as glass. He was named Michelangelo, and from the beginning, he and his trainer found they could rely on one another. Be friends, friends that could depend and trust, and... not be afraid. Michel's trainer was frightened of the dark, while the dragon was scared of being alone - there was something in both of their innocent souls that, upon meeting, knew they would be together for a long time.

When the epidemic came, Michel and his trainer were out on their adventure; they decided to stay where they were, fending their territory - together. Their relationship had grown beyond familial boundaries, they were simply side by side, and neither of them could imagine being without the other. "I love you." His trainer said one night, as they watched the sun rise in the distance. Forever, and always. Michelangelo replied in his mind, pulling his trainer in for a loving embrace.

Their love for each other - beautiful as the sun, gentle as a flowing stream, fragile as glass - it was enforced as they strove together. There was no way they could describe it, just knowing that the one they stood beside would be there, forever and always.

He didn't know what happened when, after a brutal fight with a Hydreigon that left him weak, his trainer suddenly fled. Michel had no energy left to follow the one living being he had given his all to, gave his entire life, dreams, will to live towards. His trainer was running, and along with them, his heart. I thought we would be together... forever... and always...

User Notes:
- Became infected after biting the intoxicated Hydreigon
- He repeats 'forever and always' while sobbing
- Has no taste for blood, but attacks for unknown reasons

What a strange and wonderful story you've woven.