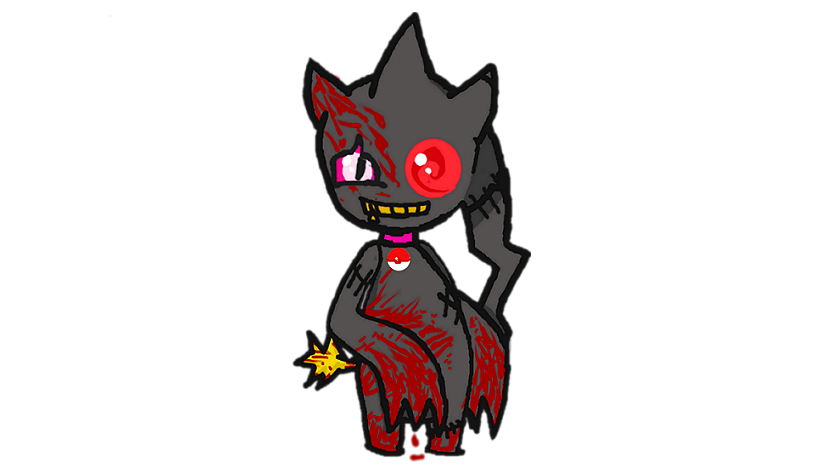 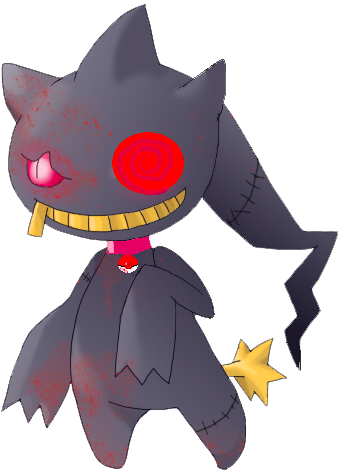 History- Twilight's story started much like many Banette, She was created as a result of her hatred. She had already been amassing a grudge when she was still a plush doll in the store. For years she waited on the shelf to be taken home to a loving child. She envied the others dolls for their supposedly "cute looks". Twilight had a defect which gave her a swirling red eye that unnerved most people. As a result no one bought her, until one day...
"Hey Greg! What's this ugly thing back there? I don't know we've had that for years. Well can we throw it out? No one's buying it and it's kinda creepy." Twilight could only stare in horror as she was roughly picked up, and thrown into the garbage can. She remembers only darkness until she was dumped into, well a dump. She was disgusted by the amount of filth, and the pokemon living there. Many where simply Rattata or Raticate, but what disgusted her the most was the Garbodor. It was Bloated by the sheer amount of trash it had absorbed. Standing well over 15ft tall it was the most massive thing the Plush doll had ever seen.

Twilight's hatred started to consume her, and she lashed out to everything around her. Spewing Dark energy every where she caused many of the Dumps inhabitants to run in fear, or faint from the damage.Finally with all the commotion, the Garbodor was distracted from it's hideous feast. The two pokemon engaged in battle. Twilight attacked first hurling her darkness at the beast. It did a fair amount of damage, but she finally got it angry. Lifting up its right arm it shot a monstrous amount of garbage at her, but giant piles of garbage are notoriously bad shots and it did help that she was so small. Avoiding it's attack entirely she hurled all of her hatred into one shot. The resulting explosion raised the garbage level up by 2ft.

Her deed done Twilight left the place and wandered the region until coming upon an aspiring trainer named Terra who showed that there is more to life than hatred. Terra took her everywhere in the Hoenn region along with 5 other pokemon to become the champion. They were about to enter victory road when tragedy struck, An undead Aerodactyl swooped down and ripped Terra in half. Twilight and the rest of her group hunted down the nicknamed 'Terrordactyl' and after several attacks from The team, avenged their trainer.
"We can't stay together, with all these rot-monsters running around traveling in a large group would be suicide." At that point, Twilight was seriously considering suicide. "Let's go our separate ways for now." Their Leader Flare, having made her decision headed to the east. Now the rest of the are scattered to the 4 winds, whatever or not they are alive is unknown.


Appearance- Her body is covered in sewn tears. Also has her signature glowing red eye and Pokeball pendant with a red jewel in the center suspended by a pink ribbon. She normally has a wide grin, when alone however she looks very grim, to the point that she literally looks darker. That is a result of letting her emotions flow, and is a glimpse of what she is on the inside.
Personality- Emotionally and Psychologically unstable. She acts happy around others because of her guilt, and doesn't wish to cause others concern, When in reality she is a very grim individual. She feels personally responsible for other's misfortunes even if she first met someone, this is also because of her guilt and subsequent depression. As a result she will protect others thinking nothing of her own self-sacrifice.
Likes to be around others, to protect them as her own way for atoning for her failure to protect her previous friends.She attempts to think rationally but is often hindered by her insanity, thinking things that have nothing to do with the situation, reacting in a random fashion. Either violently or in some cheery way.

Very unusual for a Banette in that she doesn't hold grudges(Towards Living) , all her hatred directed toward infected, sentient or not. Taking great joy in dismembering infected in the most gruesome and painful manner possible.

User Notes-
-Does not need to eat very often, But when she does eat she prefers the suffering of her enemies.
-Being a ghost type she can phase though walls.
-Can manipulate the shadows to hide objects or pokemon
-Taught Thunder by her Trainer and is good for crowd control.
-Likes torturing things (Exclusively infected)
-She shows her true personality when someone close is in danger, becomes cold and indiscriminate in who she harms, speaking in an emotionless tone. Is also at her most reckless, thinking nothing of sacrificing herself.
-Desperately wants to learn how to break dance
-Knows how to do minor surgery from practice on infected
and fixing herself after battles.
-Retains the empath ability's of a Shuppet and can sense emotions.
-Religious as &%^$ and doesn't take too kindly to atheists.

A few things dear. You need an image of the character. I've got one for you here. The code for the text color is [*color=indigo]Textcolor[*/color] (remove the *)

You also need to read The Rules Thread

Your Avatar is not alright with site rules. I saw you wanted a Banette, so I got the appropriate avatar here for you

The title of the thread should include the team. I noticed you asked about Safari, so it would be "Twilight The (Sane?) Banette (Johto|Safari)

You need to mark whether the moves were learned, bred, or Taught using TM/HM, or Move Tutor.

Species should be, in this case "#354, Banette, The Marionette Pokemon"

I also dind't notice the Ability of the pokemon listed. For Banette, your options are Insomnia or Frisk.

You also might want to go through and check to make sure you don't have any extra BBCode tags, as I spot a few hanging around.

Feel free to send me a PM if you have any questions, and I'll be more than happy to help.

Sorry I'm a bit new a this. Thank you for your help!
Mew

Not a problem, I'll have it fixed in a couple minutes.
Also, since you have your own image, would you mind uploading it to Imgur? You linked it directly from your PC, which won't work on EJ.
_________________
Maintainence/Coding Admin

I got it fixed for you dear. You need to note whether or not she has an item, Her age, and her Ability. You also need to post in the Rules thread, as you will not be allowed a character unless you post there.
_________________
Maintainence/Coding Admin

The image needs to be transparent. Use a temp image until You can get it.

Also, I don't know how, but you managed to break the code again. This forum supports both BBCode and HTML. They don't mix well, however.

I've replaced your image with a temporary one until the one you want can be fixed to have a transparent background.

Hello there :'D Welcome to EJ!
The profile seems good so far, but do put where the Banette had learned the Thunder as well as it's breeding move. [Put in Usernotes who the father is as well as if the trainer taught Twilight Thunder]
Mew

As she said, Mewtwo does check that, so you will need to include the species of the father in the user notes.

I also believe she is too young to be at level 45. That would be an older pokemon to have that amount of battle experience.
_________________
Maintainence/Coding Admin

Thank you for all your help! I hope my character meets Mew on her travels.
Mew

It cannot learn pain split from a previous evolution, as Shuppet only learns it vie Dream World, which is not allowed here. ((almost good to go dear, just a little bit more)

^_^ There is so much good music out there.

The profile looks good but I do have one concern:

What exactly does that mean? Is she stitched with a bunch of tear drop shapes? Because that would require a shiny ticket as well as a living ticket since it would look very different from a normal Banette.
_________________

Mewtwo wrote:That should do just fine, she shouldn't need a shiny ticket.

I approved the image, not the profile, lol.

457 views?!? I'm flattered. Although most of them are probably mine XD
Sponsored content