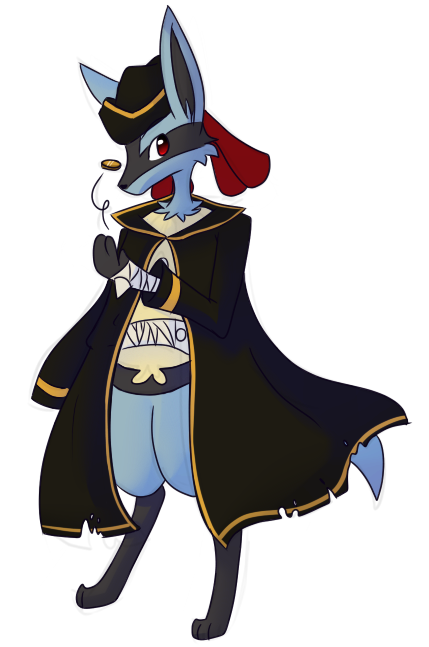 Pokédex Entry- A well-trained one can sense auras to identify and take in the feelings of creatures over half a mile away.

History-
Joshua was born to parents belongning to a rich family in the country around Johto. His training and care was immediately given to a small girl by the name of Ismaire. The young girl was only four years old when Joshua was born, with ruby-red hair and a small round hat, still big enough to barely fit on her head. They were quite the pair. Ismaire was just barely larger than the Riolu, their hair matched, and their personalities were very similar. Joshua was smitten with Ismaire, and she worked very hard to give him the training he needed.

When Ismaire was ten, however, Joshua left the country home. It wasn't because he was unhappy, but because he needed a change. He needed some time alone. Without thinking of what his leaving would do to Ismaire, he took off one night. He traveled the region, heading to various towns and landmarks. Along his travels, he took up the habit of gambling. Unfortunately, he often had to put his fighting skills to use due to his irrationaly bad luck. Eventually, Joshua found himself tied up with a gang of fighting types that mugged other pokemon or trainers along the routes at night. It wasn't his passion, however, attacking the weak to steal for his own personal gang, and one night, he escaped from the group. It was then that he decided it was time to return home, to Ismaire.

But it was not to be.

He returned just in time to see the undead Machamp leave the ruined house. The roof had been completely destroyed, caving in the left side of the house. The windows were shattered and the shutters hung by threads. A large hole gaped in the place where the door had once stood, making it easier for the Riolu to dash inside. Bodies were strewn everywhere- The servants and family of Ismaire, Joshua's family, strangers to the Riolu, it seemed endless. Some were torn completely in half. And there... Coughing and spasming in the corner of the building that was still intact... Ismaire, the right side of her face stained the same color of her hair. Joshua rushed to her side, and tried to help. But it was too late. He eyes focused one last time on his face, and her lips spread in a final smile. She closed her eyes, and never opened them again.

She was fourteen years old.

It was there, in the deep pain and regret of ever leaving, that Joshua felt the love required for evolution. His growth in size had come too late to help his friends and family, but it would allow him to prevent it from happening to others. Taking the untouched hat from Ismaire's corpse, and a similarly colored jacket hanging from a fallen coathanger, Joshua left.

And he never looked back.

Personality:
Joshua is generally carefree. He shirks his duties so that he can escape and gamble. He'll play different sorts of games for gambling, anything that involves chance. However, he has notoriously bad luck, and rarely wins. When Joshua is angered, however, he is very focused and will not stop until the cause is put to rest. Joshua is an extremely talented fighter, despite his horrible luck.

Appearance: Joshua is a tall Lucario with deep red eyes. He has a round teal hat with gold trim, and a jacket of the same color. He has off-white wrappings around both arms. In his left ear he has a gold earing. The protrusions on the back of his head are a deep red.

User Note-
The normal size of a Lucario is 4'11. However, I edited that to fit with a more realistic size. If that's not okay, I'll fix it.

Based off Joshua from Fire Emblem: Sacred Stones.

He's finished, so if a profile mod could move him to inactive until Sinnoh is closed?
Drago

Joshua is ready to be approved.
Mewtwo