>:V I demand that someone puts this awesome eeveelution up for approval.
Guest

Pokédex Entry- Dunespare will never take life. It only fights to protect the innocent. Never engages in evil. This Pokemon will remain righteous if it means dying.

Evolution Method- It must choose to die rather than abandon somebody and save itself. The selfless grants it the power to save the one it's protecting

Pokédex Entry- Dunespite is a relentless hunter, killing prey by spraying them with foul gas from its mouth. It constantly hunts for Dunspare, attempting to wipe out its counterparts righteousness

Evolution Method- It must choose to kill another who has committed a crime out of punishment. The act makes it bloodthirsty and brings out evil 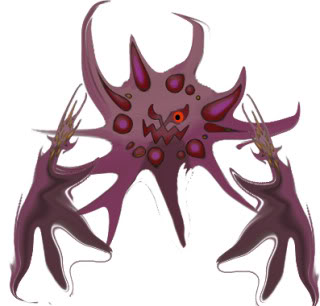 Evo Method: It must free itself with its own power. Or it must level at night with a Cursed Fragment

THIS GUY WILL STEAL YOUR SOUL
Storm 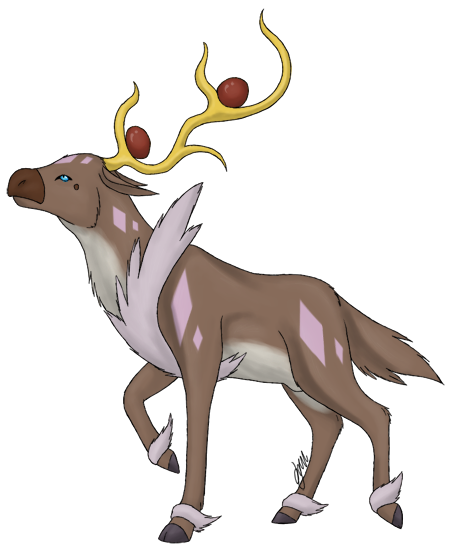 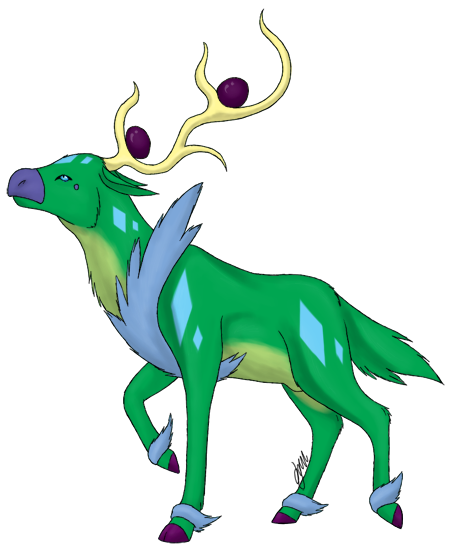 Pokédex Entry- Its believed that it can see into the future using the psychic energy hidden deep within its horns.

Item for evolution (if any)- Use a Psy Stone. (Item I made up equivalent to the evolutonary stones. Its Pink in colour with a white swirl in it.)

User Notes-
-Males have larger antlers then the females.


Free to change anything to fit to your liking.
Storm 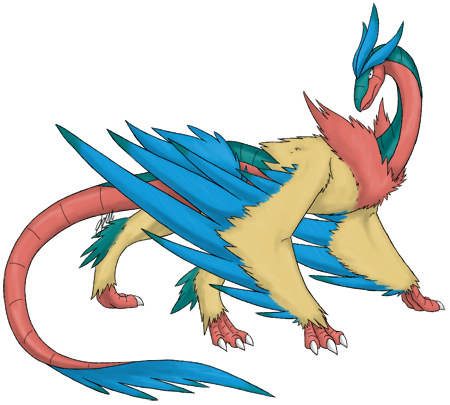 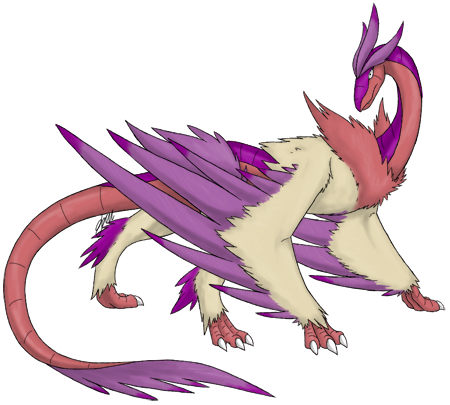 Sketch of it with its wings open.
Name- Archedactyl

Pokédex Entry- Very few fossils have been found of this mysterious pokemon. Its believed to have lived on high mountain tops thanks to the newfound strength in its wings after evolution.

Item for evolution (if any)- Save a life while holding a Dragon Fang.

User Notes-
-It walks using both its back legs and wing fingers due to its wings becoming larger.
-When its not flying it can retract its wings so the feathers don't drag on the ground.


Free to change anything to fit to your liking.
Fox

Can anyone suggest a Fakemon or is it just for special members?
Suicune

If I ever made a Fakemon this would be it :D

Name-Gutseon! (Cause I suck at names)
Genders possible-Male and Female
Signature Moves- Gatling Punch Kinda like Doubleslap but with the Fighting type
Ability-Guts
National Dex No./Species-???/Fighting Fox Pokemon
Type/s- Fighting
Height-1'03"
Weight-24lbs
Pokédex Entry-Gutseon is the Fighting evolution of Eevee and has a high Attack stat :D
Egg type- Field group (I think)
Evolution line-Eevee->Gutseon
Item for evolution (if any)- Eevee holds a Black Belt and levels up to get Gutseon
Origin of name- Guts+Eon
Attacks- (Leveling Up)
Tackle(Start)
Leer (Start)
Sand-Attack(Start)
Quick Attack(Start)
Bite
Double Kick
Headbutt
Hone Claws
Swagger
Bulk Up
User Notes-Just a thought for a Fighting Eeveelution and I don't expect anyone to use it either but it'd be cool to see it used :D
Guest 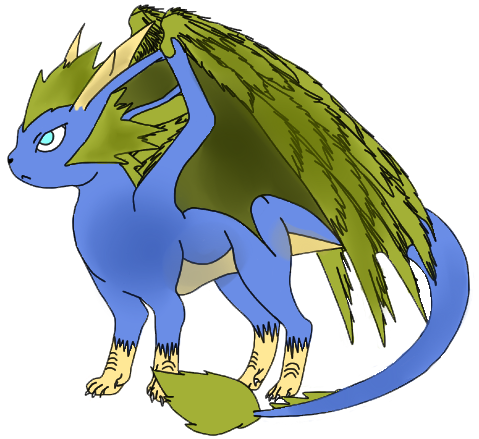 Normal (Needs to be more Transparent) 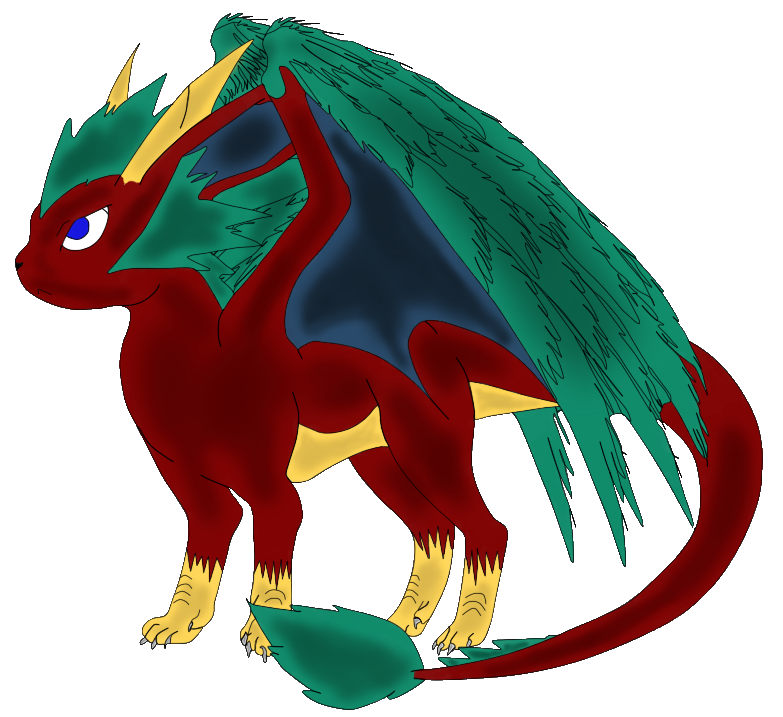 
Pokédex Entry- Guards the mountain it lives on. All those stranded or injured will ifnd themselves carried to safety.

Evolution Method- Make a blood pact with a dragon Pokemon and shakes hands/paws with them. (Has to be fully evolve dragons but it can't be with an infected)

Origin of name- Dragon species it is name after but less violent.

User Note-
- I did the sketch but for the Normal the coloring credit goes to Jay but I colored the shiny version.
- Also can someone get the image to be more transparet then it already is and resize the shiny version image.
Starbits

I read through the rules and noticed that you said nothing of completely brand new Pokémon. You spoke of pre-evos and evolutions, but nothing about Pokémon that don't come from a pre-existing Pokémon, are neither a pre-evo or an evolution. Would such a Pokémon be allowed? I have two in the works (which are very SLOWLY being completed) but I'd like to know if they're permissible before I continue working on them. 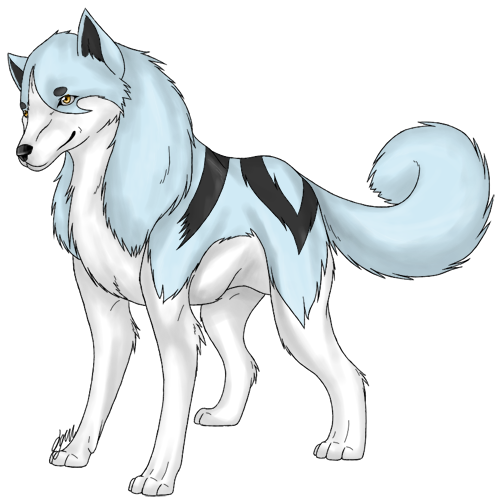 Pokédex Entry- A very loyal pokemon. It will follow its trainers orders without question.

Item for evolution (if any)- Must consume a NeverMeltIce.

User Notes-
-Huskary are known to live in very cold places.
-Growlithe will evolve into Huskary when it lives in a place that is prone to snow a lot.
-They are commonly used to pull sleds through the snow.


Free to change anything to fit to your liking.
Guest

Pokédex Entry-
Vulcantoise evolve from Torkoals that live deep
in the Earth under heat and pressure. Parts of it's
shell are hairline cracked in places from the
pressure.

Evolution Method-
Torkoal naturally combusts coal
but in an area with lava or pressure causing
the coal to pressurize and force up from within its
body as diamonds or... 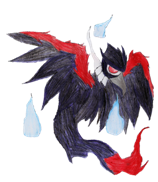 (Note: The image provided is just a rough sketch and is open for revision)
Name of Fakemon-Gallokrow
Genders possible- Male and Female
Signature Moves- Death Warning
Type: Dark
Special Attack.
Power: 100
Accuracy: 100
PP: 10
Description: Two turns after this attack is used a burst of bad luck causes the target to injure themselves.
Ability-Big Pecks or Super Luck
Type/s-Ghost/Dark
Height-1.3M
Weight-2Kg
National dex # /Pokemon Species- Gallokrow, #???, The Haunting pokemon
Gender Differences- Females have slightly shorter beaks.
Pokédex Entry- It has no solid form. Will-o-wisps have replaced the MURKROW followers it once had in life. The white tie around its neck prevents it from moving on to the spirit world.
Alt. Dex entry-Seeing one is bad luck because it may mean you're the one it is targetting. Because it cannot rest in peace until the one the white tie around its neck is bound to joins it, it will never rest or land until it has found the one it searches for. Will-o-wisps do its bidding.
Egg field- Bird
Evolution line- Murkrow --> Honchkrow --> Gallokrow
Evolution Method-A Honchkrow that has a strong emotional attachment to a living pokemon/human at the time of its death and dies slowly can become this pokemon through sheer will power, however it is incredibly rare and very few examples were seen before the infection.
Origin of name- Gallows combined with –krow suffix
STAT build- Very strong Special Attack, moderate speed, poor attack and health, poor special defence and defense.
Moveset--By level:
Start: Astonish
Start: Pursuit
Start: Haze
Start: Wing Attack
25: Swagger
30: Nasty Plot
35: Confuse Ray
40: Will-o-Wisp
45: Shadow Ball
50: Curse
55: Death Warning
60: Sky Attack
-Moves learnt by TM:
TM04 Calm Mind
TM06 Toxic
TM10 Hidden Power
TM11 Sunny Day
TM12 Taunt
TM15 Hyper Beam
TM17 Protect
TM18 Rain Dance
TM21 Frustration
TM27 Return
TM29 Psychic
TM30 Shadow Ball
TM32 Double Team
TM40 Aerial Ace
TM41 Torment
TM42 Façade
TM44 Rest
TM45 Attract
TM46 Thief
TM48 Round
TM59 Incinerate
TM66 Payback
TM67 Retaliate
TM68 Giga Impact
TM73 Thunder Wave
TM77 Psych up
TM85 Dream Eater
TM87 Swagger
TM90 Substitute
HM02 Fly
-Egg moves:
Assurance-Father Spearow, Fearow, Murkrow, Honchkrow, Swoobat or Woobat
Brave Bird- Father Farfetchd, Starly, Staravia, Staraptor, Ducklett, Swanna, Rufflet or Braviary
Drill Peck-Father Spearow, Fearow, Doduo or Dotrio
Faint Attack-Father Murkrow or Honchkrow
Feather Dance-Father Pidgey, Pidgeot, Pidgeotto, Chatot, Pidove, Tranquil, Uzefeasant, Ducklett or Swanna
Mirror Move- Father Pidgey, Pidgeot, Pidgeotto, Spearow, Fearow, Swablue, Altaria, Chatot or Sigilyph.
Perish Song-Father Swablu or Altaria
Psycho cut- Father Hoothoot, Noctowl, Natu or Xatu
Roost-Father Pidgey, Pidgeot, Pidgeotto, Spearow, Fearow, Noctowl, Hoothoot, Wingull, Pelliper, Chatot, Pidove, Tranquill, Uzefeasant, Ducklett or Swanna
Screech-Father Golbat or Crobat
Sky Attack- Father Noctowl, Altaria, Togekiss, Pidove, Tranquill, Uzefeasant or Sigilyph
Whirlwind- Father Pidgey, Pidgeot, Pidgeotto, Starly, Staravia, Staraptor, Sigilyph, Rufflet or Braviary
Wing Attack-Father Pidgey, Pidgeot, Pidgeotto, Zubat, Golbat, Crobat, Aerodactyl, Murkrow, Honchkrow, Taillow, Swellow, Wingull, Pelliper, Starly, Staravia, Staraptor, Archens or Archeops
User Note- Because a Honchkrow becoming a Gallokrow depends on the emotional state of the pokemon it is possible for both an infected and undead to evolve in this way. However because it is the spirit not the body that forms this pokemon they would not carry the infection (but would still suffer from side effects of former infection such as insanity ect)
It lacks legs and so cannot land. It's broom-like tail has dissolved into a red tiped swirl of mist much like a Ghost's Tail. It's wings are very large compared to the rest of its body.
Most are very intelligent.
It can chose to be invisible for short amounts of time but cannot appear as invisible to the one it is targeting. When it dies it evapourates.
Some are motivated by revenge or violence, some are simply content to wait for their loved ones to join them. Some do not know the one they seek has already died and must find put before they move on/die.
It's Ghost/Dark Typing is conteracted by its inability to take a hit, however it is a very powerful special attacker.
Guest

Im planing on making a fakemon. Ill get a picture of it soon. Im not sure to put a text color.

Wollrun trains and trains untill its body can't move anymore. It
challenges an opponent at least 3 times its size.

What do you mean by "Pure Fakemon"?
Dandelion

A Pokemon that doesn't evolve from or into a previously existing Pokemon, is a pure Fakemon.
Guest

But im making a fakemon evolotion for it. I wasnt gonna have it evolve into an existing pokemon.
Guest

Whereas Wollrun would not be accepted as it hints no relationship with the original Pokemon.

If you want to make a Fakemon for the site, please read this to make sure it follows the rules and follow the correct format. For images, I suggest making it similar to the prior evolution so it's obvious it's from that Pokemon's family.