I know I'm not too active here as of recent, but I thought I'd drop this here for use if anyone wants it.
A murkrow alt. evo. The art is complete for both standard and shiny, it just needs stats.
I know I talked to Sil about names, but I can't remember what we put for it.
Sil bby, if you can remember anything about what we talked about, feel free to add.
I do remember something about it eating undead without itself getting infected. Like a carrion bird.
Name is Duskrow. 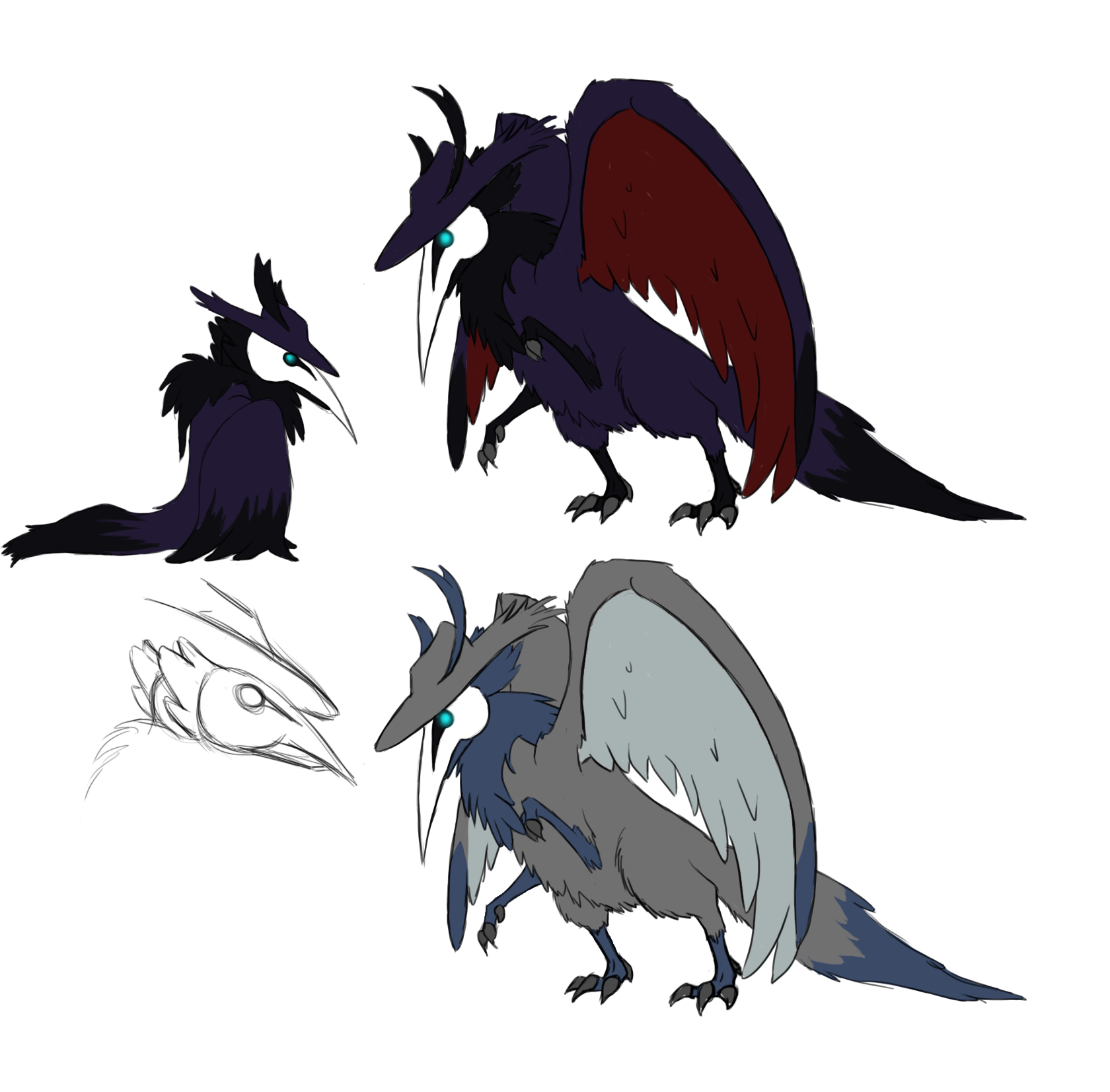 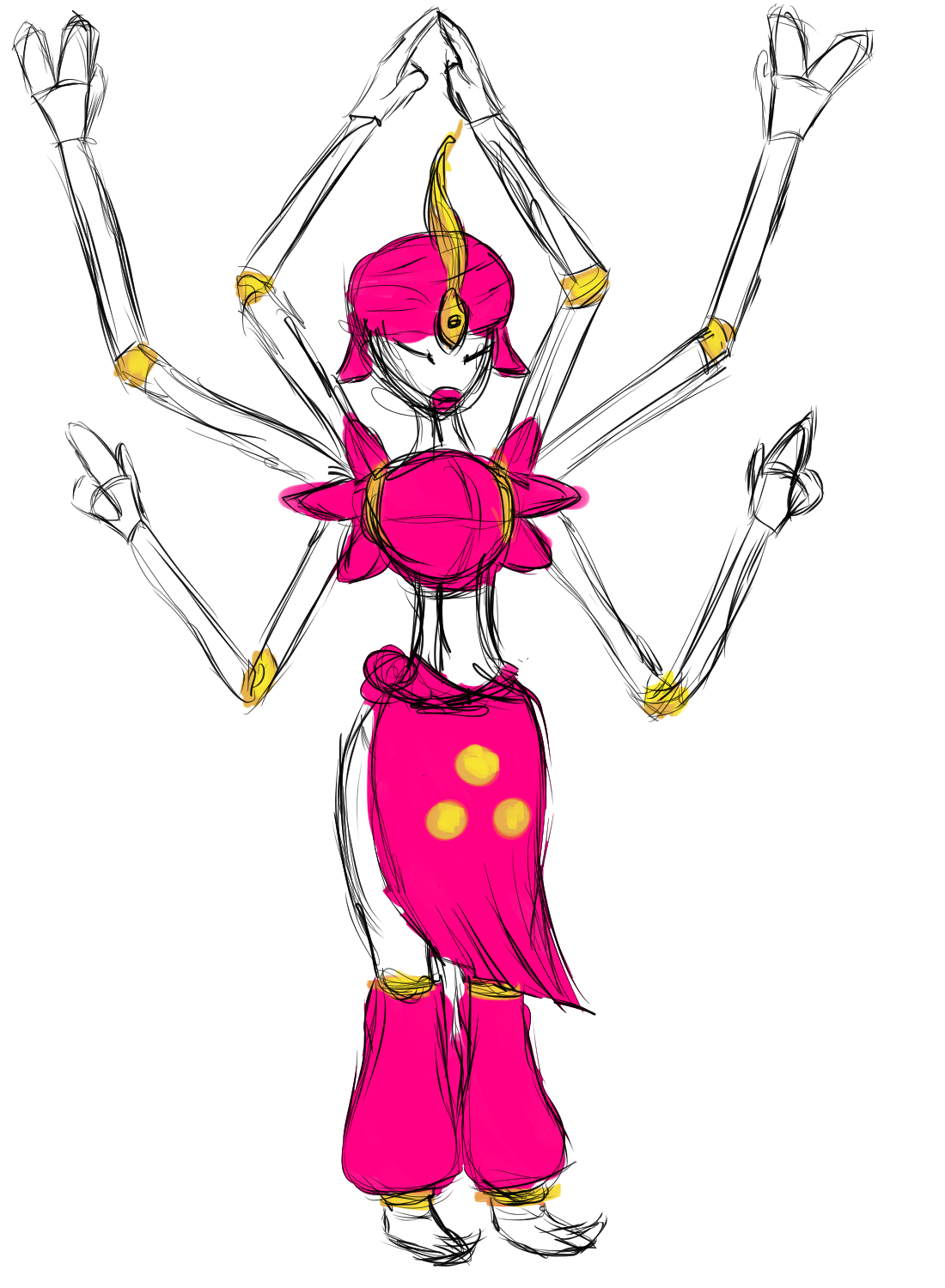 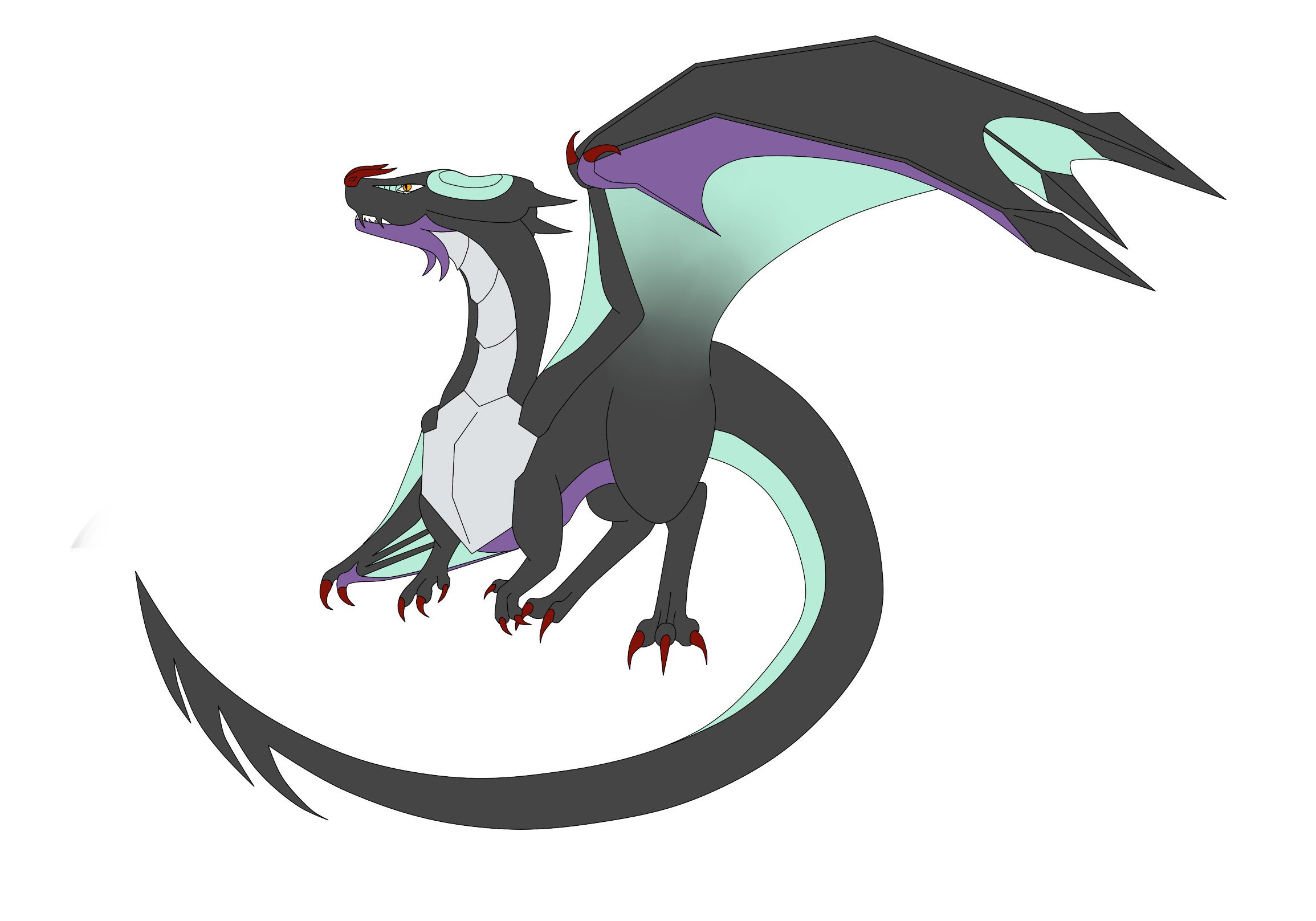 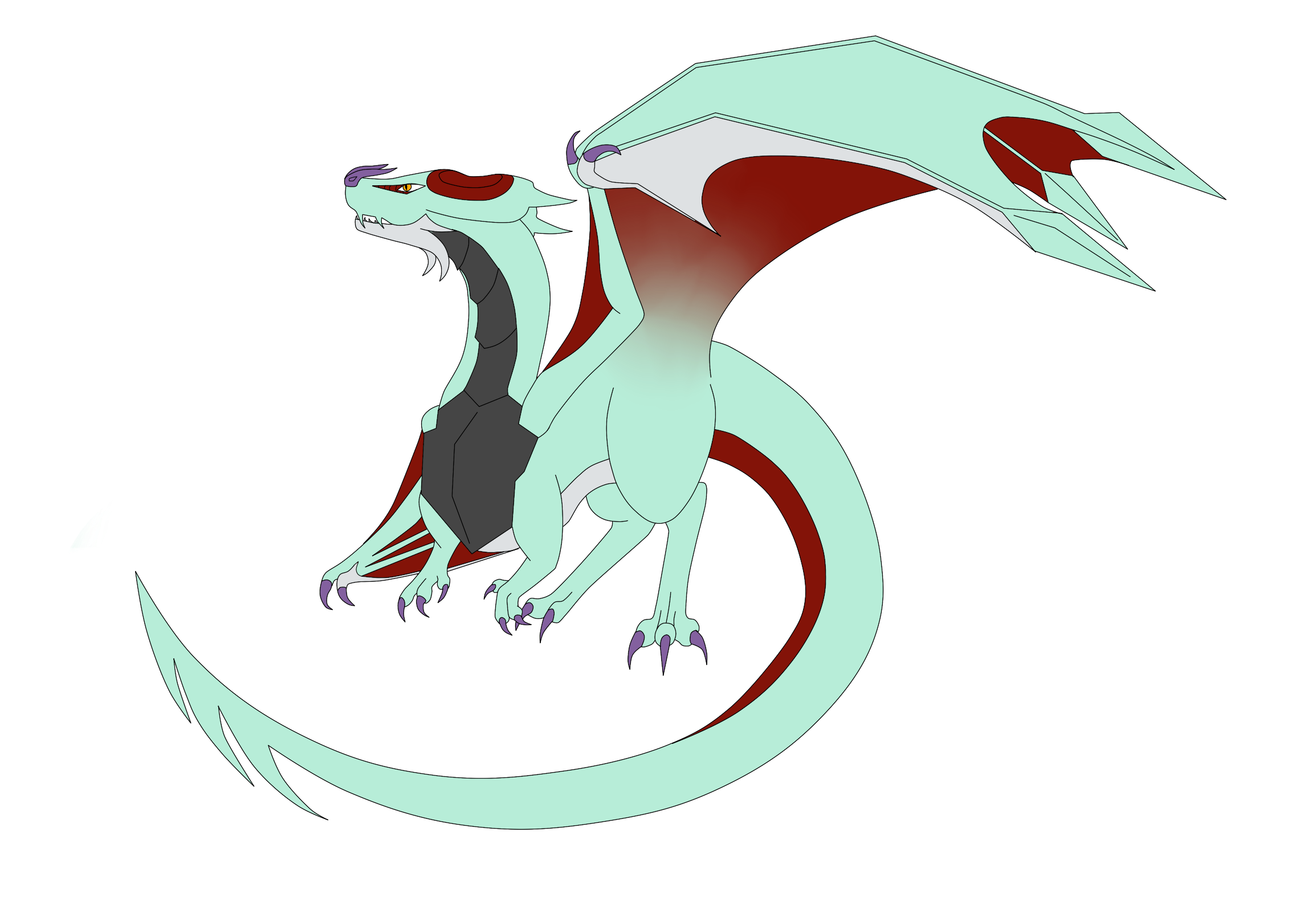 Pokédex Entry- The soundwaves it emits from its ears are powerful enough to cause earthquakes. Its scales are highly sought after, but rarely collected due to its savage nature.

Evolution Method- Must kill and consume the bones of another dragon

Origin of name- Noi taken from the prefix Noi from the line, and Ryuu, a Japanese name meaning "dragon spirit."

User Note- - The extra legs are basically arms to hold things. They're really short, but they have thumbs and can be used as legs if they feel comfortable doing so. So instead of walking on two legs, they walk almost like a raptor, or a cat, where their hind legs are higher than the front
- The tail is used as both a weapon and counter-balance
Duma 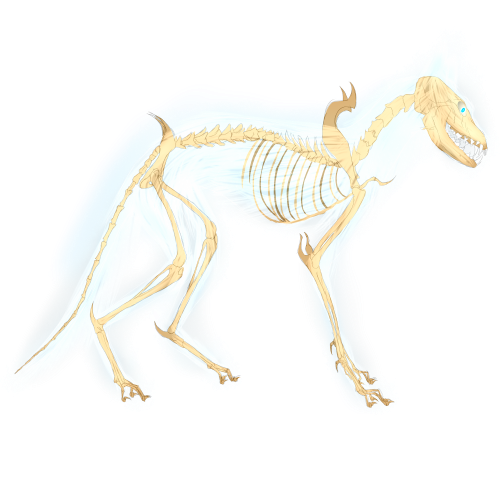 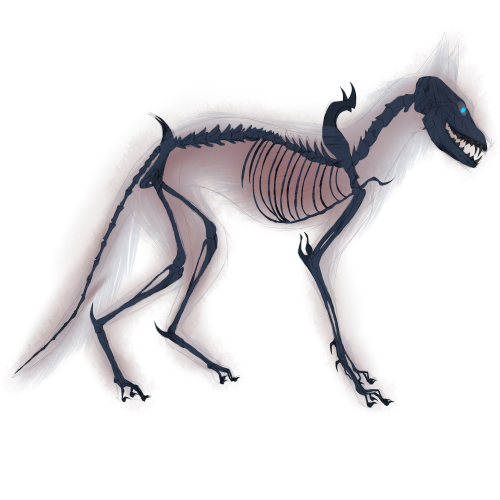 Bulbapedia Entry- "Skelevulpus is a dog-like Pokémon with transparent skin, fur and inner organs, with only its bones visible. It has transparent pupils and sclera, and two bright blue glowing irises. Its skin and fur glow blue, showing its proportions. Its teeth are pearly white and their roots are slightly visible under the bone. Skelevulpus are born from the souls of deceased canine pokemon. This Pokémon has a kind and gentle persona. It is known for pacifying angry spirits."

Pokédex Entry- Despite it's intimidating appearance, this pokemon is actually very gentle and kind. They are known for patrolling around graveyards and pacifying spirits so they can cross over.

Evolution line- Does Not Evolve

Evolution Method- Does Not Evolve

User Notes- - Skelevulpus are born from the souls of deceased canine pokemon. Its fur and skin have a slight blue glow, but are otherwise transparent. It's pupils and sclera are also transparent, leaving only its iris visible.
Moon Moon

Ok just a concept at this point, but what about a Pokemon that has a different type based on it's ivs, exactly like how hidden power works, and they have a different color scheme to match that
Duma 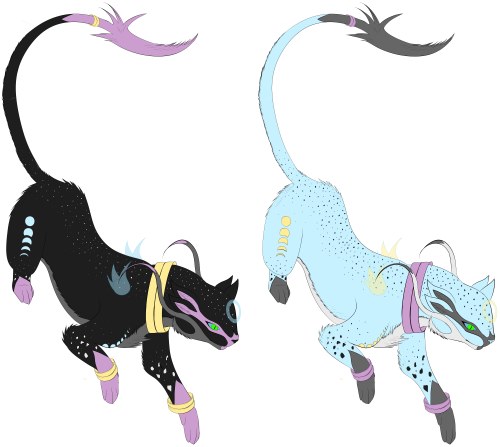 Standard Coloring on the left, Shiny on the right.

Bulbapedia Entry- "Almaguar is a slender, dark gray feline Pokémon speckled with white spots and splotches. Its fur has a soft, almost silk-like texture. It has a pastel pink "mask" marking over its eyes, a gray nose, and pastel blue sclera. It has two pairs of ears, each with pink insides and a set of long gray feelers that are tipped in pastel pink. Its paws are pastel pink and its underbelly is all gray. It has a long, curving tail with a sword-like shape toward the tip, which is also colored pastel pink Around its neck, front paws and tail are sets of two pastel yellow bands that are fixed in position by magic. Almaguar has well-developed muscles that allows it to run silently and swiftly with no sound. It also has a set of two transparent tiny stylized wings over each shoulder and a transparent halo over its forehead, all colored pastel blue. On its shoulders and hips are the lunar phases of the moon in pastel blue. It is seen as a sign of goodwill and is worshipped as a god in many cultures."

Pokédex Entry- This pokemon is reverred as a god and is worshipped as an omen of goodwill and serenity amongst many people. They are known to be very empathetic towards those who have fallen under misfortune.

Evolution Method- A Liepard can evolve into an Almaguar by sacrificing itself to save someone they love.

User Notes- -Thank you to Phoenix who helped me out with the classification and colors of this Fakemon and Silverishness who helped with the initial design and names~
-The wings and halo glow brighter or dimmer with how healthy the Pokemon is. When they are healthy and strong, they glow the brightest. When they are infected of weak, they glow very dimly.
Storm

It's been awhile since I've put a lot of thought into a fakemon, and I doubt this will ever become official, but I figured it wouldn't hurt to suggest it here anyway. 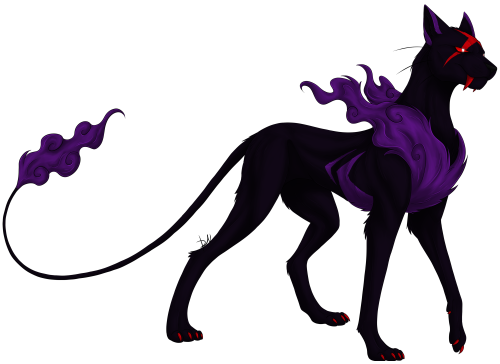 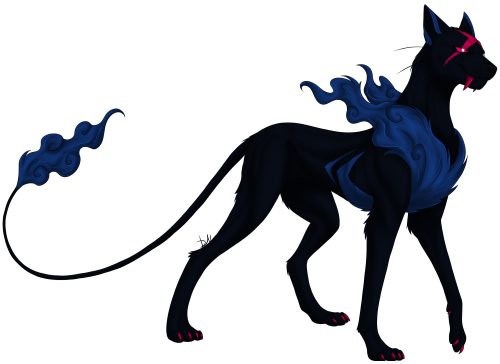 User Notes
-Persian needs to still be alive when it's jewel is removed, otherwise it wont evolve on death.
-Seen as bad luck due to it's dark method of evolution, as well as it's drive to get revenge on the one that stole from it. This does not mean it itself is actually bad luck. They do have a high distrust of humans though, so often tend to give them a nasty look when walked past.
-When a Persian become Phaleom, they don't rest until they have gotten revenge on the one that stole it's head jewel, once this revenge is complete, or the one they sought revenge on dies by some other means, it's unknown what becomes of them after. Some will often try to find some other meanings to their existence.
-All that's left of where it's jewel used to be is a large red X on it's forehead, a constant reminder of losing something that should have never been lost.
-When seen used by trainers or in captivity, it was normally caught as is, and not evolved by that individual. Those that do evolve captive Persians into this are often seen as twisted.
-If Persian does not die within a few days after it's jewel is removed, then it will not evolve, even if it dies later.
-It's well known curled tail has now straightened, becoming longer with longer curled wisp like fur at the tip instead, almost resembling a lions tail.
-It's design takes some parts from a cheetah, thus it's long legs and rather lean figure, but made to look more like a black cat/panther.
-Only it's upper and lower fangs are red, the rest of it's teeth are white.

-Phaleom is designed around what might happen when a persian were to lose the thing they feel truly prideful over, their jewel, and how that drive to get revenge on the one who would dare steal it from them would make them unable to rest peacefully, fueling it to evolve into this Pokemon that very subtly resembles it's former self.

-Small side note, this Pokemon was designed before Alola, so I've yet to design an Alolan variant. Though, I'm thinking it's Alolan design would have a full curly tail, the long fur over it's shoulders would go all the way around it's neck, and of course, up facing whiskers. Ghost/Dark typing would remain the same.


If claimed, you of course have free reign to alter whatever you want, but I'd really like if you could talk to me first if you want to change anything major. Thank you.
Sponsored content

» please put your suggestions about the forum here
» Suggestions for Cross Genre Games for the P&C Adventure Fan
» Music Appreciation Club Suggestions
» The Best Hulk figure (Green Guy) to display and any suggestions?
» Would you consider these good builds? If not, suggestions.
Current date/time is Thu Jan 27, 2022 5:17 pm