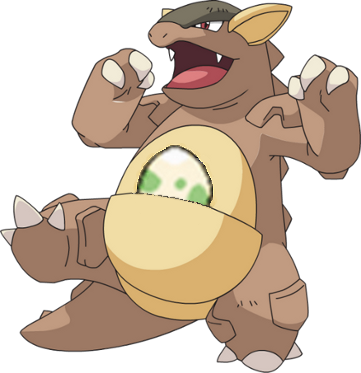 Pokédex Entry-
To protect its young, it will never give up during battle, no matter how badly wounded it is.

She was always a wild Kangaskhan, born and raised. She lived with her large family in one of the protected Safari Zones until poachers came and rounded up several of the sleeping mothers, tranquilizing them and crating them to ship to different regions. Safari zones and other facilities would pay heavily for Kangaskhan because they were such an endangered species, having no male counterparts. As such, they were great sellers on the black market. They would breed the females to random studs they had in with their egg group, so that when they sold them there would be a baby to double the price.

Rhea hated being used like a common breeder, but she was one of the lucky ones, sold to a small preservation reserve as one of the only three Kangaskhan they had. Her child was a perfect joy when she hatched, and she hardly ever let her out of her pouch. She liked her human handlers but didn’t want them near her child. But the little one needed to move around once in a while if she was to grow up big and strong. It was on one of these rare occasions that the epidemic hit their region. She had barely turned her head for a moment, checking out a strange sound from a nearby tree line, when an infected Pidgeotto swooped down and took off with her daughter. Rhea was furious! She gave chase and hunted the bird down, desperate to get her child back. She threw rocks, fallen logs, anything to knock the bastard out of the sky. But all it did was drop the mangled corpse of her baby. Rhea held what was left of her little one in her arms and cried. Only burying him once the tears dried up and the choked sobs began.

Afterwards, distracted by her mourning, she stumbled upon the bloody scene of another infected attack. Several different kinds of Pokemon, trainers, and even some of the preserve staff, painted the ground with their blood and bodies. It was horrific. But, somewhat hidden in the carnage, was a small egg. Rhea picked it up and noticed how cold it was. She held it to the light and saw a small form, and quickly put it to her ear to listen for a sound of movement, a heartbeat, anything. After a moment she almost cried out in joy, there was a faint heartbeat! She put the egg in her pouch to keep it warm and fled from the scene, not wanting to stick around to see if the eggs true mother was still alive. She caressed the egg softly as she ran. This was her egg now. Her egg, a little baby. Her new baby…

-Normally pretty easy to get along with, quick to defend weaker Pokemon
-Slightly crazy, as Rhea believes the egg she carries is hers, that it is her dead baby come back to her
-like a normal Kangaskhan, if anyone touches the egg or even reaches for it she will try to attack them
-very kind and motherly to smaller Pokemon, but first and foremost is her egg
-Not very fond of bird types since the incident

((----later in the RP the egg will hatch and this will be a dual profile. As of right now I have yet to decide what the baby is. ^_^))
Suicune