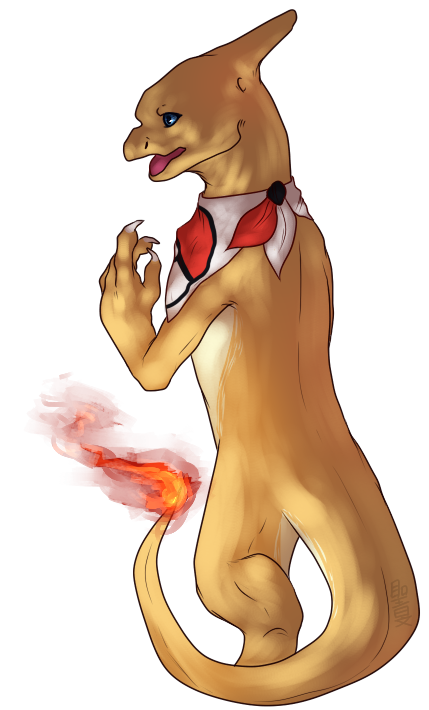 Quote
"Learning human language takes time and patience, I for one spoke it since I was a charmander."

Appearance
A shiny charmeleon with a bandana around his neck.
Personality
Despite being able to talk human language Drake is intelligent for that of his line and was taught how to speak his master's language when he was a young child. He's down to earth simple as that. He holds his master's honor in high regards and is willing to help out anyone by any means if it meant his own life.
History
Drake was born into a family of rich people with them owning a Charizard. Once Drake hatched from his egg his coloration was different from a normal charmander. Despite this occurrence, Drake was taken in as a member of the family and given lots of love by them. As three years had passed, the family's son had decided to teach Drake how to talk. Day and night, the boy had put all of his effort into teaching Drake how to talk. Drake was subjected to multiple ways of communication. Either through human speech or listening to the butler teach him when the master and his parents was away. The charmander struggled to say something, but he couldn't since he was still to young. When his master took a break for a bit, he thought maybe teaching Drake nothing but TMs would work. First being hidden power then flamethrower, Toxic and finally protect. After that it was right back to teaching. Though it seemed hopeless at first, but eventually after seven years of trying Drake's master succeeded. Drake finally said his first word.  "Hi" The Charmander had began to speak human language.
During the time growing up, Drake continued to be taught to speak more. eventually he became fluent in the english language. As he evolved into a charmeleon he was given a bandana to commemorate his success. Drake wasn't done learning yet though. After his master sat down with him. He was being taught how to talk with other humans and helping them whenever they needed. One day both Drake and his master went down to help out with the local school. When the teachers asked Drake's master how he got Drake to help out. Drake's master simply told them to ask Drake themselves. Once they did though, they was surprised what came out of the charmeleon's mouth. It wasn't his poke speech. It was actual human language.  "You never heard a Charmeleon talk before?" Since then Drake had helped out when he was needed.
When the time came for him to battle his pride however kicks in and goes picking fights with tougher pokemon which ends up with him being on the receiving end of a beating. It is likely that it was wealth that even he possessed through his master. Upon hearing other pokemon talking he was able to translate the language into english helping his master know what is being said.
Six years went by as Drake continued to talk with other humans and helping out when needed. At this point Drake was being treated not just as another pokemon, he was treated as a brother to his master. Things went very well for the two as Drake entered his young adult years. During that time Drake began translating from pokemon to human language by talking with his own parents. One day, Drake asked his master where they're going next. The answer however wasn't good. Something had happened and Drake was told to stay with the butler until they returned.
Then it happened, the epidemic struck like a plague and Drake was caught right in the middle of it. Waking up from a well deserved rest, Drake went to check with the butler on what can be done. Just as he came into the main hall the Butler told Drake to stay back from the door. "Henry, what's going on?" Then the undead bust through to door and the butler starts shooting the undead telling Drake to get out of there and find the masters. Upon escaping, Drake heard nothing but gunfire as he fled from the mansion. Now, Drake will do whatever it takes to survive and help those along the way human and pokemon alike. But can he set his pride aside and focus on what's important.
User notes
-EVs went into Intelligence making Drake weak in a physical fight
-Can translate from pokemon to english
-Mutator for learning human language
-Learned how to talk as a charmander
-parents was both charizards
-his pride blinds his judgements in a fight
-Image by Min

Ready to be moved to the PC for approval.
Victini

Okay Victini, it is specified.
Victini