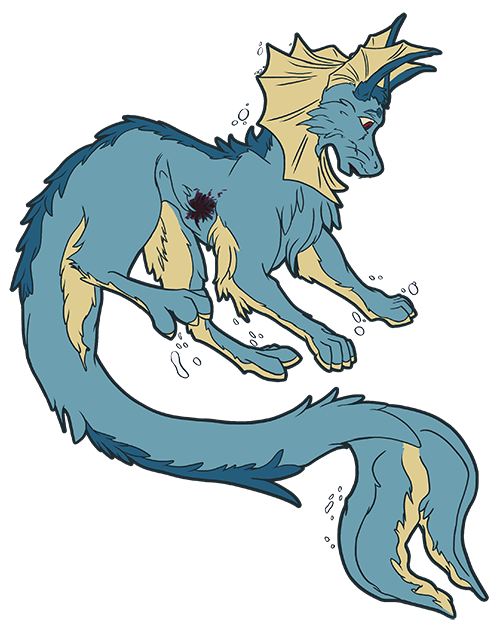 Lorilea
time of infection
1 week
Age
Adult
Gender
Female
Item
None
Level
50
Moves
Aurora Beam (Level up)
Haze (Level up)
Muddy Water (Level up)
Water Pulse (Level up)
Ability
Water Absorb
Nature
Gentle
Characteristics
Highly Curious
Height
3'03"
Weight
63.9lbs
National Pokedex No
#134 Vaporeon the bubble jet pokemon
Pokedex Entry
Vaporeon underwent a spontaneous mutation and grew fins and gills that allow it to live underwater. This Pokémon has the ability to freely control water. ORAS
Appearance
Has a bite mark on her side from being bitten by a young undead
Personality
Loving, caring, and loyal to her motherly duties, Lorilea sees all of her childrens safety including Conan's and Cyix's
History
Lorilea was among the eevee kits that was adopted from a eevee breeder in Kalos and met her mate at ten years of age. During the time when she was in her later part of her childhood, she won multiple ribbons from being entered into competitons. She held the record for five years straight until a furfrou succeeded her though it was from the owner of the other eevee. Her trainer and the other eevee's trainer had fell in love with each other three years later they married and the eevees became a vaporeon and an umbreon. Lorilea now a Vaporeon was no longer able to enter shows, but the furfrou that lived with them had done a good honor to her.
The Vaporeon had her first batch of kits ten years after evolving. Cyix was the first of the batch to be born and regrettably she wasn't able to remain with her daughter after six months, but she had a second batch eight years later. Amongst the second batch a special eevee was kept by the trainers and his name was Conan. Lorilea had to let her other kits go when they was old enough to walk and see. Conan however, she kept him groomed whenever he fell on the dirt. Lorilea had comforted her child with a song when he cried and the father had him stop until he was ready to try again. The Vaporeon had used her water moves to help clean around the house as well as washing Conan's dirty fur off when he got filthy. After Conan turned eight and successfully hit the pan on the porch, Lorilea was happy for Conan finally able to use swift. But in a year and a half later things began turning to the worse for them.
The epidemic reached Kalos and Both Lorilea and her mate was standing in front of their child defending him from an undead. She manages to kill it and gets Conan out of his bed to get somewhere safe. Along the path, they run into an undead that was the same age as Conan and both Lorilea and her mate thought it would be a quick put down to end a child's suffering until it managed to bite both Lorilea and the umbreon. The pain that she felt was beyond anything she felt in battle and blood started coming out of the bite mark on her side. Conan shoots the undead off the cliff with his swift and starts crying. Lorilea told Conan to be brave and don't look back afterwards she jumps off the cliff with her mate. With death's embrace to end her she hits the bottom which had a pool of water deep enough to keep bones from breaking. She hits the water and the shock stopped her heart. Her mate however hits the spiked rocks by her side impaling the umbreon.
Waking from her was to be eternal sleep, Lorilea looks to her side seeing the umbreon stuck on the spire. She called out his name, but the only answer was a small gust of wind. Before she woke up though the umbreon said his last words knowing she would not be freed from the virus. "Protect our son." Lorilea returned to top of the cliff a day later finding Conan gone from the area. The Vaporeon shouts out trying to listen to Conan's cries, but nothing could be heard except for an undead that wondered close to her. the water type expected an attack, but no attack came as it did not see her as a living. With a sigh of relief Lorilea set out to find Conan in hopes to protect him from the undead.
User notes
-Conan's and Iceshadow's Cyix's Mother
-Former champion of a competition
-Sings when it rains or when comforting Conan
-unaware that she is undead
ShadowCharizard

She's ready to go to the PC please
Mewtwo

However, please keep in mind as she is an actual Undead and not merely Infected her mind will quickly degenerate and the personality will have to shift to being much more violent and hungry. The protective mother role can't last since the virus has already taken her.
_________________