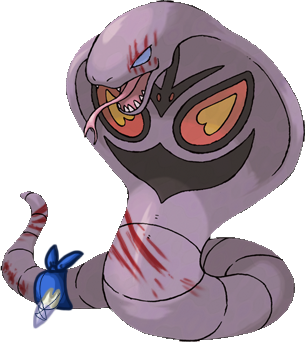 History
Mist was a small Ekans when she was first found by a trainer named Slange. Being weak, she was caught and was under the ownership of her new trainer. When she was young, she was often given disgusted looks and faces due to the fact that she was a snake. She didn't understand why people didn't like snakes- but she didn't care either. Mist grew quickly, being constantly trained by Slange to become strong. Once she had evolved into an Arbok, she wasn't trained as much as before, and was most of the time just there to help whenever the weaker Pokemon of the team had fainted. When the epidemic started, it was hell to her. The once strong Arbok was turned into a naive coward, scared of what's after every corner, frightened at every sound. One day she and her trained went outside, trying to find a berry or two to eat. As they both went outside, an infected pokemon was watching- but neither knew as they walked. It was then that the infected had lunged to attack Mists's trained, luckily, Mist grabbed Slange on the arm with her mouth and dragged her away quickly- going back to their shelter. Unfortunately, is Mist's attempt to save her trainer from near death, she injected some of her own poison into her trainer, killing her. Afterwards Mist become even more cowardly, no longer having the protection of her trainer.

User Note
-Mist stutter A LOT when she's talking- but the more the starts to like and trust you, the less she will stutter until she finally stops around you. That's how you know how much she likes you.

-Due to the incident where she killed her own trainer, she it too scared to do any type of attack that includes poison or biting. Thus, the only attack she is confident in using is Dragon Tail- but she will use her other attacks when it is absolutely necessary.

-She has a awkward obsession for Oran Berries.

Re: Mist the Arbok [Johto, Olivine]

Approved. You have a choice of what team you would like to join, either the Ilex team or the Olivine team. I'll add you to the team you want. :)