*Previously approved. Only to be posted by Cedric.* 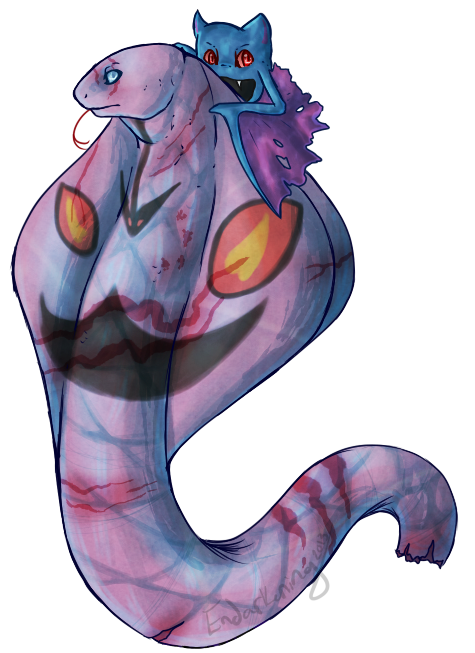 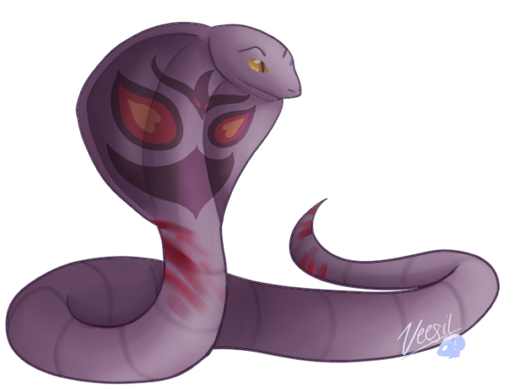 Mist was young and childish when she was first caught, a frail little Ekans whom barely was able to control her own venom output. Found by a girl named Slange, it didn't take long before she succumbed and surrendered to the Pokeballs thrown her way--too scared to escape or fight back. Captured, she found herself under the ownership of the girl, whom spoke of grand plans and goals she wished to accomplish with the snake. (All of which, the poison-type found hard to believe--it had barely been a year since her first shed!)The first order of business that she and Slange had gone through was being introduced to her new teammates. The girl's team was already impressive, filled with obedient, strong Pokemon. A well-muscled Typhlosion, a swift Scizor, an intelligent Metagross--and at the end of the spectrum was a weak, frail serpent. She was the runt of this team, even the public frowning upon the child because she was a 'snake'. Mist found her reputation sliding down quickly, the society around her disgusting or fearful of her kind. Why, she couldn't understand, and when asked about to her trainer, the human would simply shrug.Public reputation and opinions aside, Mist found herself quickly enrolled and vigorously trained, holding Lucky Eggs and EXP Shares to quickly level her to the same strength of her teammates. Her evolution was quick, only about 3 months since her capture, and over the course of several years she and her party soon rose the ranks. It wasn't long before Slange had deemed her strong enough, and stopped battling with the Arbok altogether, instead using her as help for when the newer or weaker members of the team fainted.On the day the Epidemic began, all hell was set loose upon their homes. Packs upon packs of hungry, flesh-eating hounds ravaging the small village that they had been staying at. Frantic, Slange had gathered her Pokemon and ran, oblivious to the warnings of the others as they told her to release or kill her own companions. They had fled as far as they could until they took shelter in an abandoned concrete building, panting as they tried to gain rest. They were able to survive in their temporary shelter for only a week, until tragedy occurred.Mist and Slange had gone into the wilderness to scavenge for berries, the human trusting her other Pokemon to defend their shelter while they were gone. The search had ended as quickly as it began, however, when an infected whom watched them jumped from it's hiding place. The Arbok had grabbed her trainer's shoulders quickly, pulling her away and back to camp. Unknowingly in her panicked state, the serpent had injected a large amount of her venom into her master, whom with her younger age and frail physique, died.From her trainers death the real calamity was born. Fingers were pointed, blame was piled upon Mist's shoulders like a mountain. Distrust became their law, personalities clashed, physical battled commenced, and they all soon realized that they were no longer able to cooperate with each other, at least, not with their human. Realizing and understanding this, they had all agreed to split up and walk their own paths. Mist, too weak and frightened, was unable to find words to object, and reluctantly slithered away, guilt heavy in her heart.

Mist's body is decorated from snout to tail-stub with wounds, the flesh and scales around them beginning to redden as they slowly mend themselves. Her tail is no longer there, ripped off and devoured by an undead Garchomp. She is also blind in her left eye, due to a blow from a Pidgey during a battle on top of the Olivine Lighthouse.

Although no longer a nervous wreck, the Arbok still retains some of her stutter, but does not speak with it as often as she used to. Mist has become much more confident in her abilities, deciding that she will not die like her friends did. She is prideful and does not easily back down from a challenge, even if she knows she will lose. She has taken on the role of a leader, and is determined to kep everyone alive.She still often has flashbacks and snippets of her past memories occur at random intervals, but tried to ignore them to the best of her ability. 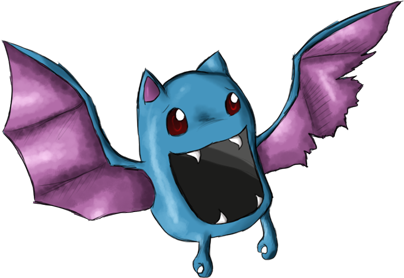 Ven was born into a large family consisting of the Zubat family, his mother a retired battler who's trainer died years ago to old age. After her trainer's death, she had sought out the cavern that they all now live in, and began a family. They all had lived happily for several years, doing almost everything together as a big tight-knit family. The young Zubat was most attached to his little sister, Lily, whom was the frailest of them all.When they first heard news of the Epidemic, they were unsure on whether or not to believe it. It had taken a while for the disease itself to reach them, their home far away from civilization. Ven's younger siblings had been the first to succumb to the disease, having devoured infected bugs. It wasn't long before the Zubat watched, horrified, as Lily died before him, only to be re-animated and lunged to attack.The battle was quick, Lily tearing Ven's left wing apart in a bloodlust rage, causing him to stumble and fall of the ledge they had been on. Upon impact with the earth, the Zubat found his brain and mind becoming fuzzy, and his voice hoarse as he tried to crawl away as fast as he could, the rest of his now-infected family rising to fly with his little sister. He wasn't sure why he hadn't become infected from her attack, but ignored the thought as he fled.Since then, his mode of transportation had been strictly crawling, unable to fly with a single wing as he tried his best to avoid and infected that came by. He soon found his echolocation to be damaged, throat sore and unable to detect beings around him as well as it used to. He took shelter in trees and bushes, before finally arriving at the city of Olivine, and found himself following voices into the lighthouse.Inside, he had met a ragtag, but close group of survivors, which he had eagerly joined in hopes of being able to evolve and maybe making new friends. Both had been accomplished, having evolving during a battle and finding great new companions. During their stay in the city, however, in the cafe, Ven found himself brutally murdered by an undead Umbreon, but was soon brought back to life by a legendary bird.Disoriented and confused, the Golbat had stumbled away from the group, who began to panic as a Garchomp attacked them, and began to crawl about the woodlands near the Battle Frontier, hoping he could find them again.

Essentially a normal Golbat. The only differences are his tattered left wing and bright, round red eyes.

Kind, generous, and all-around friendly, Ven rarely hates others as long as they are kind to him in return. He is calm and level-headed, and thinks things through a lot more than most. Due to his inability to fly, he is almost completely dependent on Mist as transportation, usually clinging onto the back of her hood as she slithers. He enjoys the company of others as long as they aren't loud and disturbing.

Ready for re-approval!
i broke the code but i don't care it looks good
Mew