Cassius the Zebstrika ((Died in RP))

Cassius the Zebstrika ((Died in RP)) 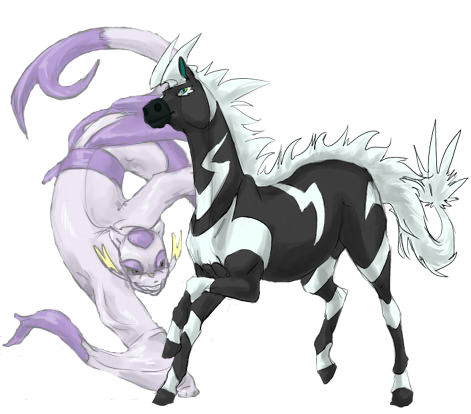 Pokédex Entry-
They have lightning-like movements. When Zebstrika run at full speed, the sound of thunder reverberates.

Cassius was caught as a Blitzle at a very young age by an up and coming Pokemon Researcher. Though he was a man of science, he trained the young Cassius hard, quickly getting the little colt to evolve into a full grown Zebstrika in only a year. The man wasn't very fond of the Zebstrika's normal electric attacks, so instead decided to teach him Thunderbolt, which he though was much more useful. The researcher's main focus was speed, and Cassius had a lot of it. He focused the rest of the young powerhouse's moves around boosting it even higher.

Cassius was as quick as the lightning he controlled, and when he went at full speed, (usually involving a few Flame Charges and a Quick Attack) you were lucky to make out even a black and white blur as thunder roared past you. The Zebstrika was rightfully proud of his natural talent, and the researcher was always good to him because of it. Though all that praise tended to make Cassius show boat quite often.

It was because of his flashy nature that the researcher, having gathered all the data he could from Cassius, gave him away to his daughter. Cassius was disgusted by this act. The girl was obsessed with Pokemon Musicals and would constantly dress him up in these awful outfits, take his picture, and force him to dance in those ridiculous shows. He hated being with her, his natural showmanship was the only reason she was interested in him, not his power, not his speed, but because he was "pretty." Oh how he hated that girl, and the researcher who had abandoned him to her.

When the epidemic hit Nimbasa they were in the middle of a show, and a horde of wild infected Patrat swarmed the stage. Cassius saw his opportunity and tore out of there, ripping off his costume and heading straight out the door. He never even looked back to see what became of the awful girl, nor did he care. He was free now! Free as the day he was born and could finally run to his hearts content. The only problem was...how does one live in the wild? Oh damn...

User Note
- he is very vain, and quick to give himself praise
- has no idea how to live in the wild
- isn't very fond of 'roughing it'
- short-tempered with a sharp tongue to match

((Image is from a dual profile, Kinah the Mienshao still alive))