Rosko the Houndoom (Died in RP)

Rosko the Houndoom (Died in RP) 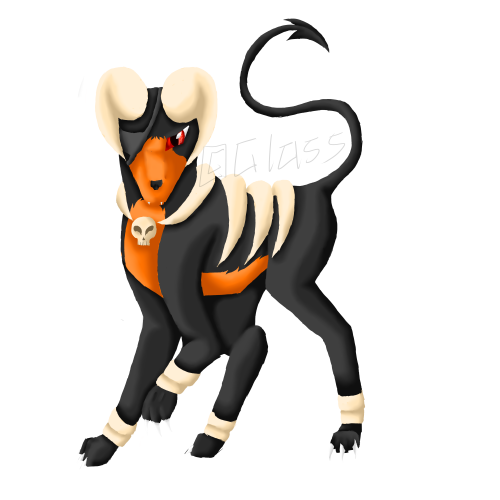 National Pokedex No.
229/the Dark Pokemon
Appearance
His right eye has a eye patch on it, due to it being slashed to the point he lost eye sight in that eye.

26 years ago he was the runt of the litter, but his mother had given him all the love a mother can give. On several occasions he was often picked on by his siblings, leaving him out of most of the things. Until one day a man with a captain's hat strolled into Goldenrod City. He had been lonely for a long time since he couldn't take his family with, so he decided to get a houndour.

Rosko had finally found a person who would love him. The Sailor decided to adopt the Houndour and give him the name Rosko and the Houndour loved it. As Rosko was growing up, he traveled with the captain to all sorts of places. The Captain sang many shanties which the Houndour howled to for rythm.

Then when Rosko was 22 years old he became a Houndoom and still loyal to the Captain and his family. At sea he was the captain's friend and first mate, other than a human first mate. It was then, when they made a stop in Unova, that Rosko and the Captain had been attacked by a couple of people identified as Team Plasma. Though the Captain had plenty of experience in physical fighting. He never used his pepper spray not even once. Rosko had been fighting against a Zangoose. However, the fight turned ugly when the Zangoose went straight for Rosko's eyes. Rosko moved his head to the side and took the slash right to the eye.

Blinded in the right eye Rosko had continued to fight as much as he could. Eventually, the captain pulled out his pepper spray and sprayed the hooligans eyes and took Rosko to the nearest Pokemon Center. The nurse quickly checked Rosko's right eye and unfortunately, he'll never see out of the right eye again. The only thing she could do is put an eye patch on his eye.

Four years have passed since that confrontation with Team Plasma. Rosko still was able to pull off his duties without any problems. then before the epidemic began, the captain had a stroke, taken to the hospital there was no way to save the captain from death. The Captain had given Rosko one last order which is to go find a way to Kanto and give his wife his captain's hat. Unfortunately, Rosko couldn't leave his master's side. Sadly, the captain died a few hours later.

Rosko was heart broken, but he had not forgotten the fun they had while at sea. Rosko then left the hospital and started his way to Kanto. The day came when the Epidemic hit. Rosko was at the port waiting for a ship to come take him to Kanto, but none came. The tides started pushing the tiny ship that both Rosko and the Captain was on out to sea, but before it got to far out of jumping distance, Rosko tossed the captain's cap on board. The ship left him behind, but he must use his experience as a naval traveler to find his way to safety. Due to his traveling around the world, he's heard many different stories about the legendary pokemon of the deep.

Notes
-Sometimes sings shanties when traveling around.
-Has a sailor's mouth and he admits he has one.
-Carries a heavy burden on his paws, but honors a friendly pokemon's wishes.
-can't see out of the right eye, but able to still fight.
-Image made by Duma

To be continued later
ShadowCharizard

still waiting on an image from Baloo but I might have to see if someone else can commission it instead.
ShadowCharizard

There he be the Houndoom with a sailor's mouth.
ShadowCharizard