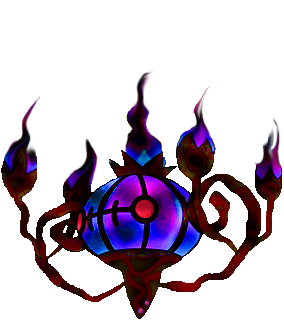 Approximate time of infection: A couple of days ago (just over four months after the epidemic hit)

History:
Once a wild pokemon, Flickry was captured as a simple Litwick  in Unova. Never  the patient one,  his new trainer taught him Shadow Ball and Flamethrower as soon as he was captured. These quickly became Flickry’s signature moves as it was his favorite way to release the soul of a victim and burn it to feed.  His feedings were always followed by a maniacal cackle that had become his trademark. By training every day, it wasn’t long before he was able to evolve into a Lampent. He celebrated his new form by going one step too far, he took the soul of a human to feed.  His trainer had always hated that Flickry’s diet consisted of the souls of the living, but when Flickry had committed that sin, he was no longer willing to carry a murderer with him. He cast Flickry aside to fend for himself.  Flickry didn’t understand, it wasn’t his fault that he was a Ghost Pokemon! His type only fed on souls to survive! Did his trainer want him to starve?! Enraged he incinerated the boy that had taken from his home only to throw him away. Horrified by what he had done, he fled until he came upon the docks of Castelia City, where he quickly hid on a boat that was bound for the Johto region.

While on board, he tried not to draw attention to himself, so he didn’t feed. By the time he got to Johto he was starving. The ship docked in Johto, and he was barely able to wait for the humans to get off the ship before rushing out to feed. He took in the souls of several wild Pokemon nearby until he was satisfied. Waiting for night, Flickry began wandering around the new city where he came upon a shop with a lovely purple stone in the window. He was enthralled with this stone, he had to have it! He thought it would look so good with his purple flames that he ignored human rules and broke into the shop to steal the pretty trinket. However, as soon as his curled limb touched the pretty rock a brilliant light surrounded him and he felt a change coming upon him. He was evolving! The pretty trinket in the window had been a Dusk Stone! But there was no time to celebrate this new form as with the last, for as he came out of his evolution a strange looking Zubat swooped down and sunk it’s fangs into his lower half.  He cried out in pain and quickly burned the offending creature to death, feasting on its soul as a form of retribution.

The next day Flickry began to feel strange. He felt hungry, hungrier than he had when he got off the ship, but no matter how much he fed he just wanted more. The air was filled with the sound of his cackle, the harsh shriek of it scaring off most other prey. If he had bothered to check he would have noticed that, stemming from the bite marks which oddly enough hadn’t healed, strange red markings started crawling up his body.  By the end of the day, they had covered all of his lower half and his eyes had taken on a reddish under-glow. Not that he was aware, but he was now, officially, an Infected. And only time would tell when the infection would truly take him.

User Notes:
-Due to his dual-type status and the fact that he is technically an object, I figured that (even though he is part ghost-type) the signs of infection would still be present

-There is nothing left of Flickry, the infection has completely claimed him. Only his part fire type stopped him from completely disappearing. He has about a day left before *poof*

-The only word he can say is "Souls!"