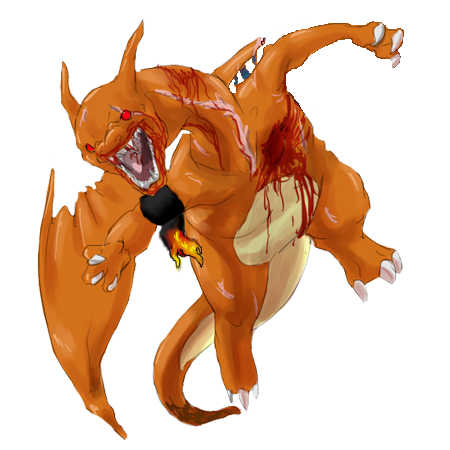 Height- 6'01" (noticeably larger than an average Charizard)
Weight- 231.5lbs (the bulk of his weight is muscle, he trains every day in strength and stamina)

History
Cathal was bred especially for Fenix, his trainer. Her grandfather, a great lover of fire-type pokemon, bred and trained these special creatures and passed on that love to Fenix. She loved Cathal the moment he hatched, and she raised him with a devotion that he could only love her for. They grew up together in Kanto, and over the years her specialty in fire-types expanded to collecting them from every region. While her personal style reflected that of her signature pokemon, a Ninetales named Kyuubi, Cathal never felt left out. Even when during their travels she adopted an egg and a small Riolu she named Anubis hatched from it. She devoted a lot of her attention to the new baby and though he was little jealous, he learned to take the shy thing under his wing as a little brother. After a wicked experience with Team Rocket, where Anubis was stolen and almost shipped off, Cathal became almost obsessive over protecting the little one.

He trained with Fenix every chance they got. He would build his muscles and his stamina to give him an edge in battle and so that he could be sure to protect his family. He was trained so rigorously and fought so often that his many hardships left him with several scars that still litter his flesh. Along with one gruesome scar over his left eye, he also has a deep, jagged scar running down his neck to his shoulder. The injuries were sustained when he was still a Charmelion, so after his evolution they stretched and sometimes, when he over-exerts himself, the neck injury causes him pain in his shoulder.

As her only flyer he was her only means of transportation when she didn’t want to walk, so he was almost never in his pokeball. It was during one of their routine travels from Kanto to Johto that they were hit by the epidemic. A flock of deranged Hoothoot attacked them while in mid-air. Cathal was so confused by the sudden assault that he tipped Fenix over and she fell. He managed to grab her in time and set her to the ground before turning to face the attackers, turning most of them to twitching piles of flesh with a massive Flamethrower attack.  Fenix was able to call out her team, but unfortunately all but he, Anubis, and Fenix perished. His family in ruin, Cathal let out a massive roar before launching an all-out offensive, so Fenix grabbed Anubis and ran while he covered their escape. By the time he had taken care of the infected that had destroyed his family, he couldn’t find them. Only a single section of his beloved trainer’s scarf near where they were first attacked remained.

Now he roams the region in search of them, Fenix’s scarf tied around his arm to remind him of what he searches for. A single-minded refusal to accept that they are gone driving him. Every now and then he thinks he catches a glimpse of them, but has never caught up.


User Note
An exceptional fighter, yet hesitant to fight a weaker opponent
Only attacks others (infected not included) that attempt to attack first
Mild mannered, tends to keep to himself, but very protective of those he trusts

--Infected and subsequently killed by Delia, he is now one of the Undead. Thanks to his Fire-type the infection spread so quickly he was able to turn when she killed him.