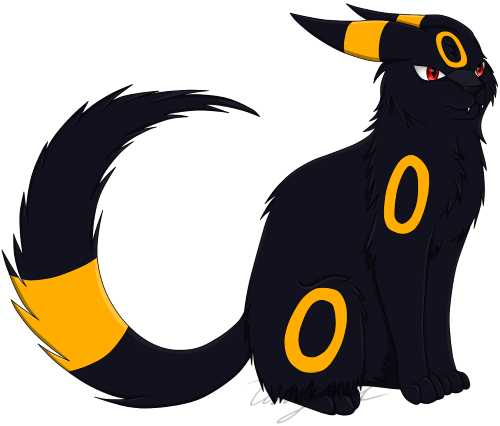 Pokedex Entry
When exposed to the moon's aura, the rings on its body glow faintly and it's filled with a mysterious power. Y

Personality
Barry is quick to act and defend his partner Jill which he searches for after being seperated during the outbreak. His favorite thing to think about is sandwiches and made a pun about Jill fitting nicely into a sandwich.

Appearance
An average Umbreon with a appetite for a Jill sandwich.

History
Barry was a young Eevee so carefree of the world until he met a trainer by the name of Jill. During the 27 years with Jill he grew up with her and for some odd reason he loved eating sandwiches and during his time as a teenager he started referring the sandwiches that Jill made as Jill sandwiches. This of course started going to his head as a way to make a pun towards Jill. During one of their operations in investigating Team Rocket they was able to disarm a few members and place them in jail. As they headed into Johto however things began to change for the eevee.

One day when Jill was given a moon shard from a family that raised eevees throughout their lives Barry had just became an adult. Then the next day he and Jill was training suddenly he was evolving. Once the evolution was finished Barry was now an Umbreon. Then the five years both Barry and Jill became quite a nuisance for team rocket. However, Jill did have one other pokemon with her that Barry was friends with. An Absol by the name of Chris which she named after her boyfriend. Barry was a long time friend of Chris and the both of them had separated from time to time when it came to rescuing others in distress when the pokemon rangers need backup. They both are part of a special unit of the police which borders the Kanto region and Johto region During one of their investigations they hit a trap that caused the ceiling to come down. Barry had used Dark Pulse on a door and broke it down. Jill escaped from the room and Barry had said a second late and she would fit nicely into a sandwich.

Then the day of the outbreak came Jill had left with Chris and Barry was left behind by accident. For two years straight Barry had been eliminating the undead while searching for Jill and Chris. Thinking on his pun three years ago about Jill sandwiches. He continued to travel to find any survivors and signs any of Jill and Chris.

To the Main PC please for approval
Victini

First I'll need to know where that image came from? Did someone on EJ draw it for you, or did you get it from an outside source? You need to state its origins on the profile.

Secondly you've not included Barry's age. That's important when determining whether his decently-high level is justifiable.